A pair of frustrating losses might have made the Raiders desperate to clock up a home win when they took on the Sea Eagles at GIO Stadium on Saturday night, but the visitors were pretty confident, given that they had come away with a twenty-point win over the Storm at AAMI the week before. With Marty Taupau getting the first penalty for a second effort two minutes in, Jarrod Croker took the two, and for a moment the Raiders did a fantastic job of containing and slowing down the play on the next Manly set, putting in three really hard defensive tackles.

Two Canberra errors changed all that, however, as a slow peel from Shannon Boyd got the visitors a boost in field position, and then a second slow peel from Josh Papalii on the next tackle got the Sea Eagles even closer to the Raiders’ line. From there, Taupau made up for his opening penalty to run an unexpected diagnonal line on the second tackle, making about fifteen metres to come to ground about five from the chalk, and paving the way for a galvanising period of Manly-Warringah mobility as the team shifted the ball from side to side, restless for an opening.

When it did come, the passage was so effortless that it looked as if there had to have been an obstruction as Daly Cherry-Evans collected the footy from Trent Hodkinson and sliced through the defensive line on the right edge. In real motion, it looked dodgy, but in slow motion it transpired that Iosia Soliola had simply failed to contain the Manly halfback, leaving Jack Wighton open to contend with a tackle that he hadn’t even started to prepare for.

With Hodkinson adding the extras, the Sea Eagles were now six ahead, and a terrific effort from Hodko also laid the platform for a dropout on the restart – part of a pretty impressive evening overall for the ex-Knight as he tried to fill Blake Green’s big boots in the no. 6 position. In a bizarre twist of events, though, the Sea Eagles didn’t get a chance to run at the line, and were instead granted a penalty kick right in front of the uprights after Sezer missed the dropout clock by about half a second.

It was a drab moment for the home team and yet another example of the unnecessary errors that Canberra have made throughout their season this year. Another occurred a set later, when Jordan Rapana broke through the line and got the footy across to Blake Austin, who was only just downed by Brian Kelly. With a quick play-the-ball, all the Raiders needed was one more good run, and yet with Boyd botching a pass from Sezer the Sea Eagles had all the momentum once again. 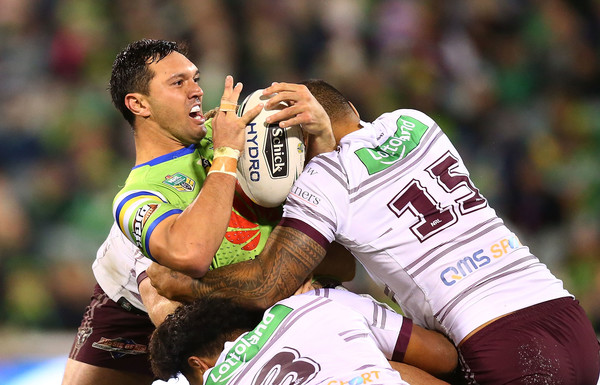 On the next set, Kelly was just as good in attack, almost breaking through the defensive line right on the chalk, only to offload a DCE at the final moment. From there, DCE almost broke through himself, only to improvise a grubber off the side of the boot and then pop forward to trap Papalii in goal. It was to be the start of several near-misses for Manly over the next couple of minutes, which included Jake Trbojevic reaching the line just at the spot where DCE had crashed over earlier a couple of tackles into the dropout, only to look to his side and find brother Tom had dropped back.

It didn’t matter though, since a flat ball from Turbo on the next tackle sent Joel Thompson across on the left edge, with the ex-Dragon somehow managing to make his way untouched through a sea of Raiders’ jerseys from ten metres out. Once again, Hodkinson added the extras, as the Sea Eagles seemed almost invincible, begging the question of what it would take for Canberra to effect a comeback after such a surge of momentum from the visitors. 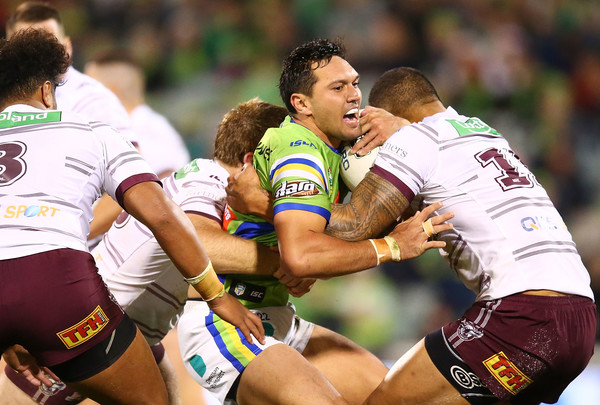 As it turned out, all it took was an error from Kelly and an offside penalty from Lewis Brown for the Raiders to consolidate, allowing Nick Cotric to put down the first of two tries that would put Canberra squarely back in the game by the time that Croker abooted through a penalty kick on the stroke of half time, despite not making the first two conversions. With those four additional points, the Raiders would have been ahead when they headed into the sheds, but Cotric’s efforts still stood them in pretty good stead for the second stanza. 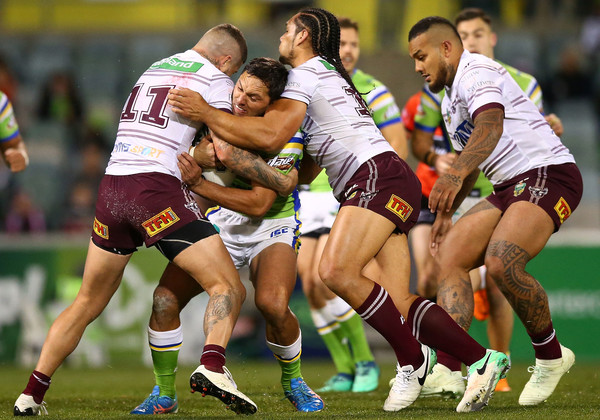 Part of what made Cotric’s tries so galvanising is that they didn’t involve anything too special – just a pair of clean, crisp, professional plays that allowed the Raiders to steady themselves and remind themselves of their home advantage after the opening onslaught by the Sea Eagles. The first time, the footy moved through Boyd, Sezer and Wighton before finding Cotric on the left edge, providing Boyd, in particular, with a bit of closure after a fairly underwhelming start to the game.

The next time around was just as clinical, with a huge pass from Siliva Havili and then a pretty long pass from Sezer setting the stage for a pair of short balls from Wighton and Croker that once again saw Akuila Uate scramble at the last minute to defend his line, but too late to prevent the big Canberra winger from crossing over for a double.

A slow peel from Taupau and then an offside call for Frank Winterstein saw the Raiders narrow the scoreline to two points after Croker booted through the penalty just before the break, in a pretty lucky outcome for the green machine given that Elliott Whitehead had coughed up the football a second before. It seemed to give them a kick when they came back from the break, too, as an offload from Leilua on the ground landed right in the hands of Jordan Rapana, who booted it down the end of the field before any of the Sea Eagles had expected a chase.

It was a touch of the classic Lepana magic, but Turbo responded with an even gutsier play, collecting the footy and then shifting to the right, where he passed it to Uate while still in goal, providing his winger with a bit of closure after having let through Cotric’s two tries earlier in the game. Nevertheless, Canberra doubled down and consolidated over the next couple of sets, with a careless high tackle from Taupau on Soliola allowing Croker to finally level the scoreline at 14-14.

A set later, the Raiders replicated the leftwards movement that had served them so well earlier in the game, only for Cotric to find himself forced to pass the footy back inside after some scrambling defence from a wiser Manly outfit. Canberra now got some bad luck, as Whitehead was awarded a penalty and put on report for having tripped up Thompson, only for the replay to show that he had just collided with him after making a play at the ball on the back of a low, skittering last tackle kick.

That gave Hodko another penalty goal, and another chance to flex his muscles, only for Taupau to dissolve all the Sea Eagles’ momentum with a knock-on on the first tackle of the next set. Once again, the Raiders consolidated, with some good handling from Croker helping to recover what initially appeared to be a lost ball on the left edge, only for Cotric to kick on the last – much too hard – in a pretty unflattering sequel to his first two tries, as Sezer made clear to him on the field. 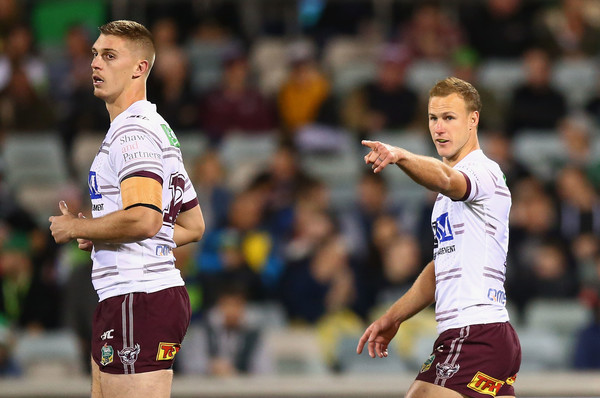 As the twenty minute mark looked, Hodkinson was sent to the bin, and yet, as has so often been the way this season, having twelve men on the park only seemed to strengthen the Sea Eagles. First, it was an enormous tackle from Thompson to prevent Whitehead scoring just after Hodko left the field, then it was an extraordinary piece of play from Turbo, who danced forty metres across the park before booting through a low ball that appeared to have utterly defied Wighton on the line, where it bounced just below DCE’s knees, singing out to the Manly halfback to ground it.

To his credit, Wighton had the presence of mind to reach out a hand to put down the ball first, but this produced the dropout that led to the next try, which saw Kelly showcasing some truly extraordinary footwork to beat Leilua on his inside and then fend off Austin to slam down four more points for the Sea Eagles. With DCE missing the conversion, Hodko’s absence from the field felt more tangible than at any other point during his sinbin, but Manly had still made the most of a pretty precarious situation and seemed galvanised by their effort.

Conversely, Canberra started to deteriorate over the last fifteen minutes, descending into the late slump that has marked so many of their games this season, with Sezer putting in a pair of errors around the seventy-four minute mark that must have created an ominous atmosphere for local supporters. Yet that just made it all the more powerful to see the Raiders repeat the formation that had produced their first two tries, albeit from further up the field, as if determined to leave absolutely nothing to chance this time around. 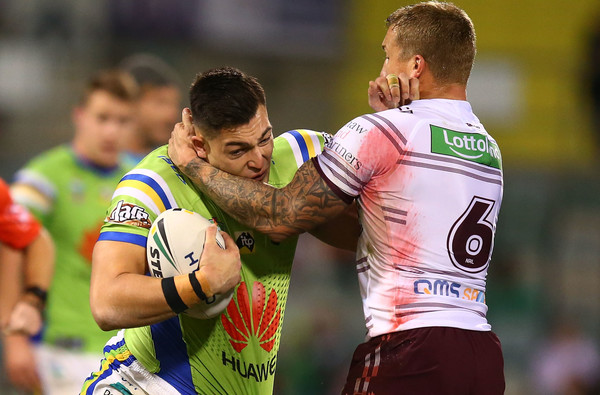 However, starting early meant that Cotric was bunched in by Uate on the left side before he could reach the corner, forcing him to put in one the best kicks of the night, and a brilliant corrective to his overlong grubber earlier in the second stanza – a perfectly placed crossfield chip that caught Wighton right on the chest to slam over for another six points once Sezer finally sent the Steeden through the uprights.

The game wasn’t over yet, though, as a scramble between Turbo and Cotric right on the goal line initially looked to have gifted the Raiders an additional try, and then looked as if it might be a simultaneous grounding, only for the replay footage to show that the Manly fullback had taken the footy into touch before Cotric had managed to get a hand to it. The score was set at 20-20, paving the way for one of the most idiosyncratic field goals of the year from Sezer, who dropped the ball on the side of his boot before lobbing it through the posts at an oblique angle.

In other words, the field goal summarized everyting about the Canberra win – desperate, provisional, and often seeming to come from odd angles, but determined to come away with a victory – and avoid another heartbreak – however ugly it looked. They’ll be looking for an even more emphatic close to the game, then, when they take on the Panthers at home after the bye, while the Sea Eagles will be anxious for a consolation win when they meet up with North Queensland at Brookvale Oval.