Saturday night’s game at Mt. Smart Stadium may have started with a rapid surge of momentum for the Warriors, but it was all South Sydney energy from there, with the Bunnies eventually coming away with a 30-20 win and scoring their first try with twelve men on the field. Their night started with a strong of early penalties – Damien Cook and Cody Walker for slow peels, Angus Crichton for not being square at marker – and they were pretty lucky to avoid a sinbin in the first couple of minutes. 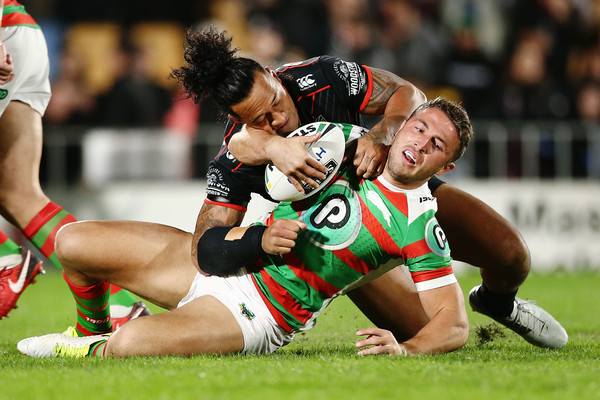 With all that augmented field position, it felt inevitable when New Zealand scored the first try, although the nature of the try made it more than just a result of South Sydney sloppiness. Collecting the Steeden at speed about eight metres out from the line, Agnatius Paasi ducked under Tom Burgess and then eluded Sam Burgess, who’d expected his brother to clean up the New Zealand forward, before slamming to ground with both Surgess and Greg Inglis tumbling on top of him.

Paasi hadn’t scored in 32 games, since his debut year for the Titans, and he took the first hit-up on the restart, personifying the gutsiness of the home team over these opening minutes. Roger Tuivasa-Sheck put in the trysaving tackle of the night on Campbell Graham at the end of the next Bunnies set, and with Tom Burgess sent to the sin bin after a facial and as a response to the escalation of South Sydney penalties, the Warriors had a twelve-man team to wreak havoc upon. 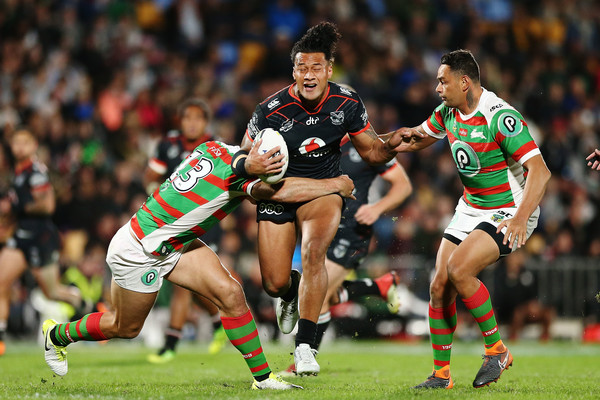 As has happened so often in 2018, the advantage now shifted to the depleted team, since while New Zealand initially looked destined to score, a series of small errors and disappointments started to gradually leach away their momentum. First, it was a last tackle kick from Blake Green that bounced off a South Sydney leg and brought all the escalation of a sterling New Zealand set to nothing. Then, it was a tackle from Cook that prevented a near-linebreak from RTS, who had managed to elude Dane Gagai, but found himself stopped in his tracks by the South Sydney hooker. 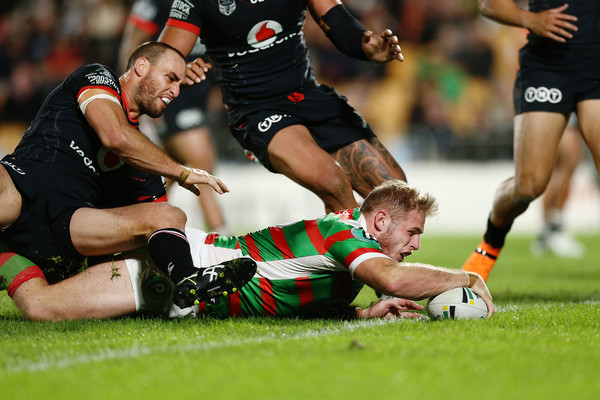 Then, a tackle later, Adam Blair lost the ball, making this the first incomplete set of the game. On its own terms, it wasn’t a huge deal – like Green’s kick – but in combination these factors all prevented the Warriors making the most of a twelve man opposition. Instead, the Rabbitohs were the next to score, as George Burgess made up for his brother’s absence by ploughing through a sea of New Zealand defenders for what initially looked certain to be a double movement, only to be clarified by the replay footage as one of the toughest putdowns of the year. 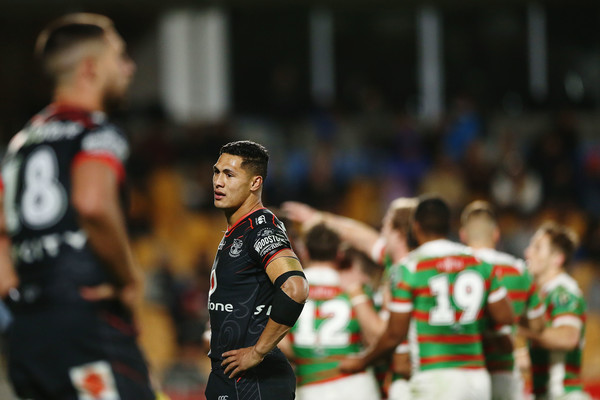 In slow motion, you could see that Burgess was slowed down about five or six metres before he reached the chalk, and that he actually landed on his left hand about two metres out, only to somehow pivot around and keep his right hand off the grass before getting the Steeden down against all the odds. It was the kind of effort than only an enormous frontrower could even think of executing, and even then difficult enough on an empty field, let alone with a torrent of New Zealand defenders piling on top of him.

In other words, it was the perfect rejoinder to Paasi’s opening try, and just as galvanising, with the Bunnies now scoring the back-to-back tries that the Warriors had so often seemed to glimpse over the opening minutes of the game. The key was a deft bit of leftwards play, but in an additional twist John Sutton caught the footy and turned around backwards to send it on, while a tackle later Inglis popped it, basketball-style, over to Robert Jennings to score in the left corner, giving the entire sequence a seesawing, up-and-down effect that looked even better in slow motion.

It wasn’t long before the Bunnies showed some equally brilliant timing on the left edge, as a double pump from Cook gave way to an even more emphatic double pump from Walker, who almost stopped right on the line and took advantage of some mistiming from Green in the process. From there, Walker got the footy across to Crichton, who concluded it all with a flick pass back to Inglis to slam in at speed and put down four more points for his beloved South Sydney team mates. 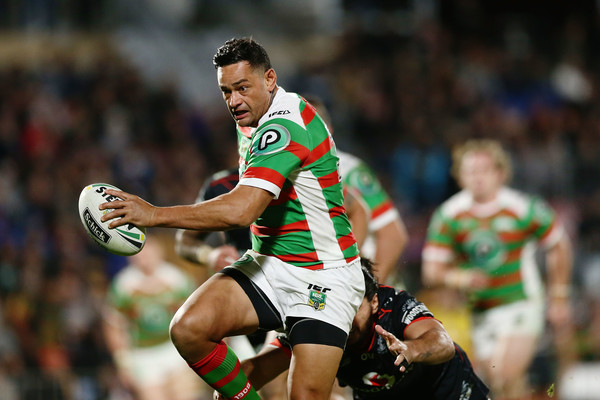 As it turned out, Adam Reynolds was having a pretty spotty night with the boot, and missed the conversion from what seemed to be a fairly manageable angle shortly after. If it dampened the Bunnies’ spirit, however, they didn’t show it, as Graham stuck out a boot onto the sideline to catch Luke’s kickoff on the full, gifting his team yet another advance in field position as the Warriors started to flag.

Halfway up the park Gerard Beale was pinged for not being square at marker, but the Rabbitohs had accrued too much momentum by this point to kick for goal, especially given that this hadn’t been one of Reynolds’ most reliable nights. Instead, they chose to run, and a couple of tackles later Tom Burgess complemented George’s effort with a try of his own, slamming through Paasi and Simon Mannering and getting the Steeden to ground as Blair arrived too late to make a difference.

The first ten minutes of the game had been so bound up with Burgess energy that this tryscoring double seemed to put South Sydney beyond the reach of the Warriors, even with a whole extra forty minutes to go. New Zealand had a brief gasp of hope when Tevita Satae got through the defence right beneath the posts, but he ended up knocking the football on, meaning that it was the Bunnies who got the next try a mere three minutes into the second stanza. 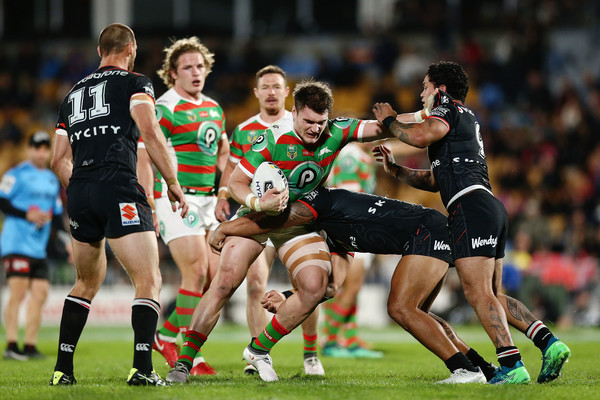 It started with Reynolds opting to pass the football left on the last, with a huge spiralling pass to Sam Burgess that Burgess replicated in turn to Sutton, who was more or less unmarked out on the left edge. Catching the New Zealand defence sleeping, Sutto beat Peta Hiku and then jumped over a low tackle from Tohu Harris to put down the next four points for South Sydney, with Reynolds now managing to add the conversion for good measure. 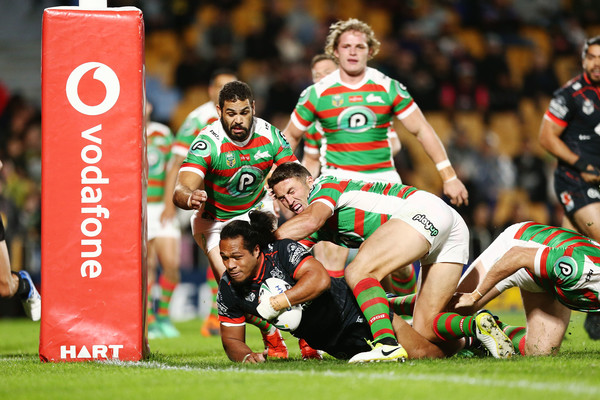 This would be the last try of the evening for the visitors, and yet the Warriors weren’t to know that as they braced themselves for a challenging forty minutes, desperate to avoid the enormous defeats to the Roosters and the Storm that they’d suffered over the previous month. Moments later, they glimpsed an opportunity for more points when Harris let a Reynolds high ball bounce, only to lost it to Inglis while attempting to offload it a moment later. As the rain set in and the Steeden got slippery, a series of penaltes – escorts from Kata, offside for Green, slow peel for Tevaga – saw the Bunnies enjoy a sustained period of possession and field position, and yet a handling error from Crichton in turn gave the home team a letoff.

They made the most of it too, consolidating for what would be their last really serious chance to wrest the game away from a South Sydney outfit that were playing as desperately as if they were twenty points behind on the scoreboard. A linebreak from Tevaga saw RTS carry the football right to the line, only for Inglis to be pinged for not being square at marker – a momentum killer for the Warriors that saw Gavet lose the footy on the first tackle in an awful flashback to Harris’ earlier stuffup. 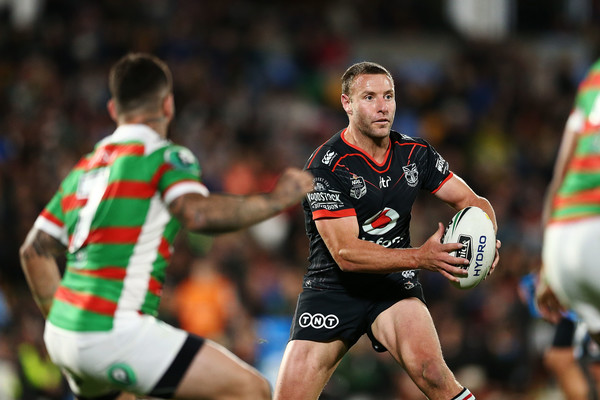 Still, New Zealand got a goal line dropout shortly later, after David Fusitua popped back a last-tackle kick from Green, and Beale showed some quick thinking to scoop it up and boot it forward, where Sam Burgess was forced to shepherd it into touch. At the end of the next set Lawton dummied and ran through Sam Burgess, Inglis and Tatola, only to be just held up as he got the footy to ground beside the posts, for the last real chance that the Warriors had to mount an extended comeback. 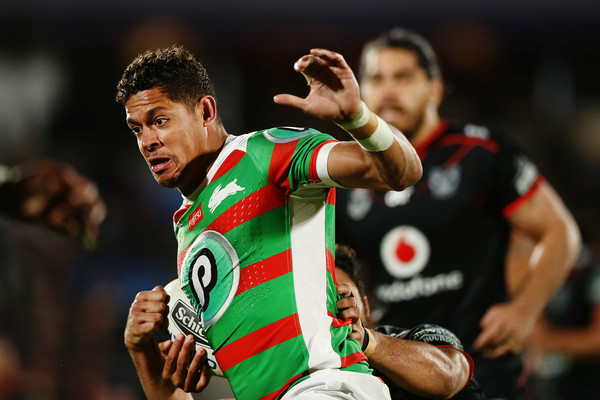 The resurgence of South Sydney dominance came with a terrific run from Cook that saw Walker break through the line and the visitors resumed their pressure on the New Zealand defence. Moments later, Sutton kicked and chased down his own ball to the in goal area, only for some shoulder contact from Harris to prevent him getting there. The big second-rower was sent to the bin, but the Bunnies’ rhythm also seemed to have been ruptured, as they decided to take the kick instead of going for another try, and Reynolds booted through their last two points of the night.

Yet if the Rabbitohs didn’t score again this second stanza, they did a good job of keeping the Warriors out. By the time that some deft movement from the left edge and a quick pass from Hiku saw Kata beat Gagai to score in the corner, there were only five minutes left on the clock, and this couldn’t possibly be more than a consolation try. The Bunnies will be looking to resume this rhythm when they take on the Sharks next week, then, while it’s back to the drawing board for the Warriors as they strategise for how to best contend with the Sea Eagles after the bye.