A solitary penalty kick from Gareth Widdop was all the Dragons had to show for themselves when the first and second teams on the NRL ladder met at Pepper Stadium on Saturday night. With two solid wins behind them, the Panthers came away with four tries, four conversions and two penalty kicks of their own to hand St. George their most devastating loss of the season so far.

Penrith were good enough to score in the first couple of minutes, but with James Maloney losing the footy on their right edge and Ben Hunt then forcing Dallin Watene Zelezniak to cough it up on the left edge, the mountain men would have to wait until considerably later in the game for their first four points. Still, there was no doubt they were in control of the field from the outset, whether it was Corey Harawira-Naera cleaning up an offload from Paul Vaughan, or two strong runs from Isaah Yeo up the left edge that forced Euan Aitken to put in his two best trysaving tackles so far this season.

Back-to-back dropouts from Ben Hunt – both taken into touch by Tyrone Phillips – gave the Dragons a bit of a reprieve, but huge tackles from Maloney on Dufty, and Whare on Widdop, meant that the Red V had to channel all their frustration back into defence when Penrith got a hold of the ball again. They put in some of their most punishing work on the next set, and Nathan Cleary had to kick from within their twenty on the last – but Penrith seemed to regroup almost immediately. 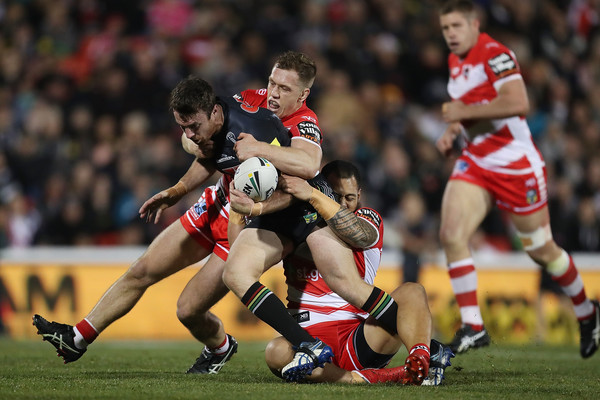 A couple of sets later, Yeo almost crossed over again – this time closer to the posts – and Maloney forced a dropout, with only some quick thinking from Widdop preventing the Penrith no. 6 from chasing down and grounding the football himself.  No try ensued, however, and the first points of the night came after a handling error from Nene Macdonald got the Panthers some additional field position and a subsequent flop from Jack De Belin got them the first penalty goal. 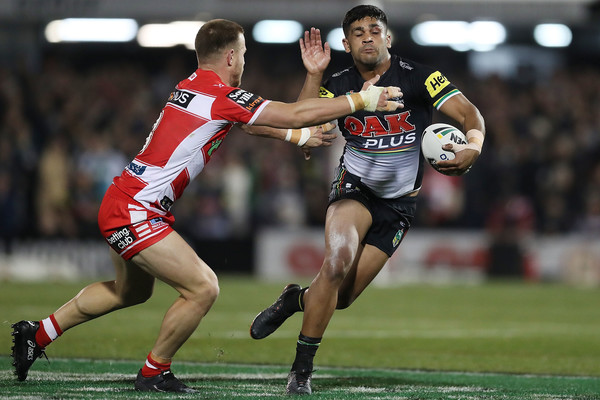 It wasn’t until six minutes out from the siren that the mountain men consolidated, thanks to a linebreak that saw Tyrone Peachey scoot around Jeremy Latimore out on the left edge, ducking away from Dufty before Latimore finally got him to ground the second time. A moment later, Maloney sent the ball across to Cleary, who made one of his bravest runs of the season, pivoting off his right foot and then slamming right up the middle from twenty metres out.

In a way, it was like a condensed version of Peachey’s previous run, as Cleary also eluded Latimore and then slammed to ground with Dufty on his back. With Brad Fittler sitting in the stands, it was the best possible argument that the Penrith halfback could have made for Origin contention, putting his team an imposing 8-0 on the scoreboard after Maloney booted through the extras. The Panthers were clearly pumped as they headed into the sheds, with Viliame Kikau making a brave burst at the line twenty seconds before.

The Dragons started the second stanza with a repeat set following a strip from Reagan Campell-Gillard, and a pair of hard runs from Leeson Ah Mau and a twist-and-spin from Tariq Sims momentarily promised them a stronger forty minutes of football. Yet with Maloney catching a chip from Hunt on the full, and Widdop responding with a high tackle on Maloney, the Panthers made their way back down the other end of the park, where Yeo almost crashed over for the fourth time on the back of a restart, only for McInnes and Latimore to hold on for grim life.

With Hunt now leaving the field due to a leg cork – replaced by Kurt Mann – the Red V seemed to have lost what little momentum they’d been able to gain, only for Maloney to be pinged for interference on Latimore, allowing Widdop to boot through the first and only two points of night for St. George. While an ankle tap from Lafai might have prevented DWZ breaking through the line a set later, Maloney re-established the Penrith lead after an offside error and verbal dissent from Latimore got the home team another penalty kick. 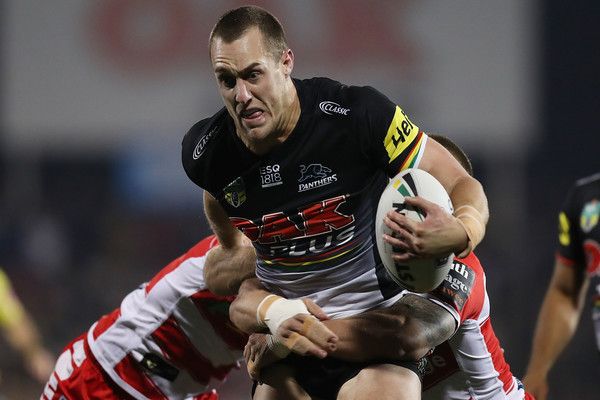 A hard run from Jack Hetherington on the restart was the perfect platform for the Panthers to consolidate their momentum, and sure enough Maloney followed up with an offload on the ground that allowed Yeo to make the linebreak of the night and almost arrive at the chalk for the try he had been hankering for ever since the first whistle blew. He didn’t quite make it, but it didn’t really matter, since a moment later Whare sent the footy across to Christian Crichton on the wing, who collected it right on the sidline before slamming back in through Mann and Dufty to score.

Several sets later, Wayde Egan somehow got the Steeden to ground beneath three Dragons defenders, but it turned out to be a penalty for Penrith after James Tamou helped drive the entire bundle of players over the line. A huge defensive effort from the Panthers on the next set meant that Widdop was actually forced to run backwards and lose metres on the third tackle, only for Phillips to cough up the high ball at the start of what could easily have been a tryscoring sequence for Penrith.

Nevertheless, a pair of errors soon got the mountain men the field position they needed, after Mann lost the footy during a punishing tackle from James Fisher-Harris and Blake Lawrie was penalised for tackling Maloney while his leg was in the air. From there, Penrith broke the pattern that had developed over the game, and tapped instead of opting for a penalty kick – a decision that helped intensify their focus, as a huge run from DWZ to the left saw Lafai called offside, resulting in Kikau almost crossing over, before Whare was bundled up on the right edge by the Red V on the last tackle. 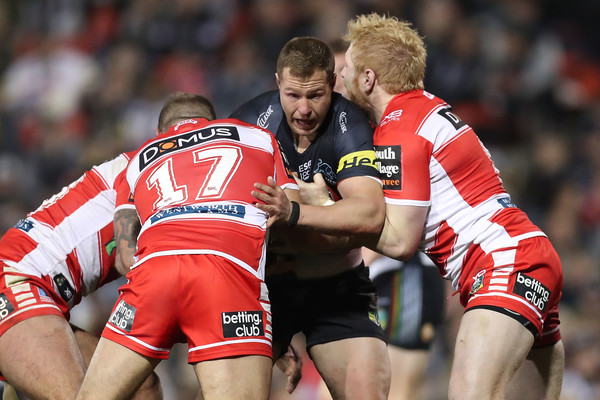 The home team responded by dragging Nightingale into touch on the third tackle of the next set, while Cleary started their next attack by dodging Nene Macdonald as he came in for a huge hit. With the big winger getting an offside penalty for his troubles, the Panthers got another piggy-back up the park, as Maloney found touch and then sent hrough a flat ball to Kikau a tackle later. After having rared for the chalk all night, the big forward now smashed through Widdop and Lawrie, then Frizell and Dufty, from about fifteen metres out, for the toughest try of the game.

The Panthers weren’t quite done, however. Twenty-seven sconds out from the end, Egan put through a remarkably deft grubber a metre out from the line, and RCG showed some quick thinking to leap ahead and make it a 28-2 win once Maloney had booted through four from four. There couldn’t have been a more galvanising way for the Panthers to beat the Dragons at this particular point in the season, and they will be anxious to continue that momentum when they take on the Raiders after the bye, while St. George will be digging deep into their arsenal to ensure a definitive comeback against the Bulldogs at ANZ Stadium in two weeks time.