After a month of relatively close wins, the Sharks utterly decimated the Knights with a 48-10 smashdown at Hunter Stadium on Sunday afternoon. The point scoring started early, after Herman Ese’ese leaked the first penalty of the night by putting some undue pressure on Chad Townsend on a last-tackle kick, and the Sharks chose to tap and go instead of slotting through the first two points. All it took was some deft movement out to the right edge, and a brilliant pass from Matt Moylan – which saw Nathan Ross run in out of the line – for Jesse Ramien to crash over for the first try of the afternoon. 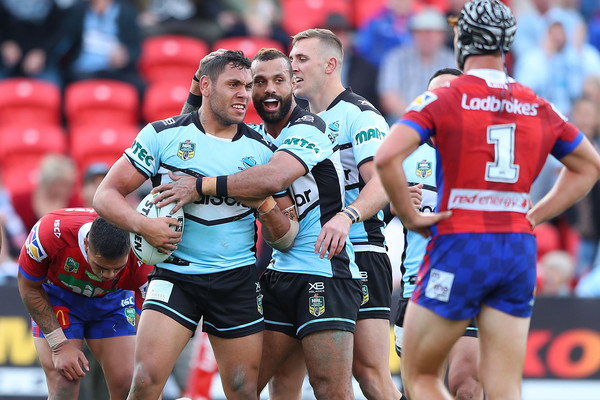 The Sharks momentarily lost their momentum when Josh Dugan coughed up the footy right in front of the dead ball line after a monstrous kickoff from Ken Sio. However, a huge tackle from Matt Prior on Jack Cogger saw the Steeden come free a couple of tackles later, and with Luke Lewis scooping it up Cronulla had possession once again. While Townsend might have kicked too far at the end of the set, Dugan made up for his earlier error with a trysaving tackle on Aidan Guerra a couple of minutes later.

The next Cronulla try came off another Newcastle stuffup, as Townsend booted through a kick bomb a set later only for Sio and Ross to miscommunicate about who was going to clean it up. Seizing his opportunity, Valentine Holmes was the one to gather up the footy to his chest ten metres out for the line, fending off Ross to score a try that was every bit as sudden and effortless as the visitors’ first.

With Townsend missing both conversions, the Sharks were only eight points ahead – ten, once the Cronulla halfback sent through a penalty kick about eighteen minutes in – but they still had all the momentum, and seemed raring to get into a rapid tryscoring groove if the Knights would only give them the opportunity. Nevertheless, a knock-on from Paul Gallen – his second big error of the night – gave the Knights a sustained period of possession and field position, as they made one assault after another on the Cronulla line.

In a way, though, this Newcastle advantage ended up working better for the Sharks, since when Dugan managed to just keep the football within the field of play at the end of yet another repeat set – under considerable pressure from Kalyn Ponga and Slade Griffin – the visiting team had showed that their defence was resilient and rigorous enough to sustain even an extended onslaught from the red and blue army.

With Ponga taken off with an HIA moments after, following a massive tackle from Lewis, the Sharks seemed ready to rock again, but they didn’t score their next try until the last ten minutes of the first half, so depleted had they been by the effort of defending the Knights over the past series of sets. Holmes laid the groundwork by shifting to the left edge for a couple of sets, meaning that when Jayden Brailey made one of the best runs of the night up through the ruck and offloaded to Dugan, the Cronulla fullback was in place to make some good metres up the left side.

From there, the Sharks shifted the footy back inside, where Prior took it to the line and spun in a tackle right on the chalk, jammed between Griffin and Mitch Barnett, only to reach out his right arm for an offload to Brailey, who slammed through and scored four points as a sequel to his terrific run through the ruck. This time, Townsend managed the extras, although his relief was short-lived, since a couple of minutes later he became the main casualty of the Knights’ first six points of the match.

It was a sequence bookended by halfbacks, as Cogger popped the footy over to Lachlan Fitzgibbon, who twisted and slammed through Townsend at the ten metre line, before cruising over the chalk for the first Newcastle try. With Sio adding the conversion, this was exactly the show of strength that the Knights needed – a one-on-one contest in which one of their biggest and burliest players simply decimated the opposition as thoroughly as the Sharks had been decimating them so far .

Still, the problem with Fitzgibbon standing in for the team as a whole was that it suggested that the team as a whole couldn’t gel, and so needed these heroic one-man efforts to get themselves back in the game. Sure enough, a trip from Ross on Ramien a couple of minutes out from the siren showed that Newcastle couldn’t absorb Fitzgibbon’s energy into their defence, as the Sharks constructed a nice line out to the left, where Moylan timed his pass perfectly to send Dugan over the chalk. 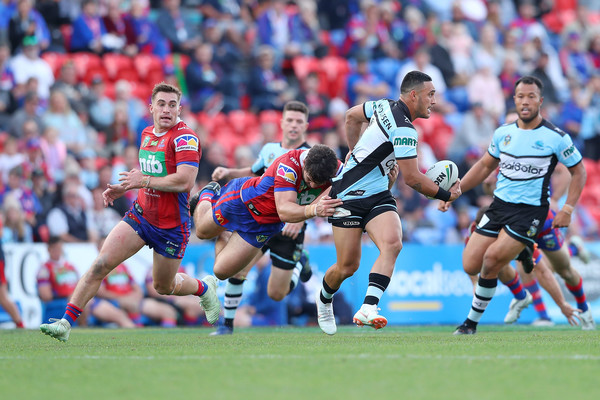 Full credit has to go to Dugan as well, though, who skidded around Shaun Kenny-Dowall and then fended off Ponga for the perfect rejoinder to Fitzgibbon’s try – just as hard, but even speedier and more dexterous in its sense of timing and judgement. The fact that Dugan had opened the game with an error, only to regather, consolidate and score this final try in the first stanza, gave these four points an additionally rousing quality, especially once Townsend sent through a second kick.

Three minutes into the second stanza, the Sharks got a burst of field position after Danny Levi was called offside. Given the way the afternoon was unfolding, it felt almost inevitable when Edrick Lee crossed over on the left edge, at the end of one of the most fluid and ingenious configurations of the Cronulla spine the game so far. It started with Townsend collecting the footy in the middle of the field, and making the slightest of dummies to the right – just enough to dishevel the Knights – before sending the football to the left. 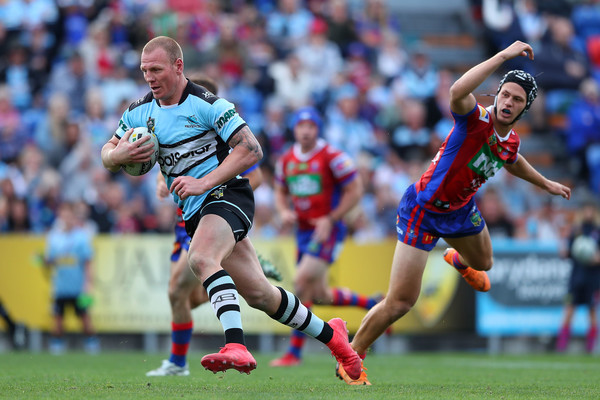 From there, Moylan sent it across to Wade Graham, before dancing back behind his second rower, collecting it again, and then shifting it on to Lee in turn. For a moment, Moylan was the fullback, and Graham was the halfback, as two players whose skill set is famously fluid and interdisciplinary coalesced for a perfect moment in a miniature game all of their own. Townsend bookended it by booting through another conversion, and the Sharks were now more than four times the Knights at 6-28.

They’d get another twenty points over the rest of the game, in what would feel more and more like a Cronulla-Sutherland victory lap, rather than a match in which Newcastle were contenders in any realistic sense. Luke Lewis was the next to go over, catching a short ball from Moylan before skipping past Ponga, and scattering a whole host of other Newcastle players, reading the fissures in the Knights’ line so intuitively that they only became fully visible once he’d exposed them by crossing beneath the posts.

If Dugan’s try crystallised his gradual return to form over the course of the game, then Lewis’ ability to find an unexpected hole in the defence was a veteran gesture, and in combination they made the Sharks feel unbreakable by this point in the match. Holmes was the next to score, off a brilliant grubber from Moylan, which bounced so awkwardly that Sio and Ponga were unable to clean the football up, leaving it free for the Cronulla backliner to grab it in his right arm and ground it beneath Sio with only the slightest of bobbles before it made contact with the turf. 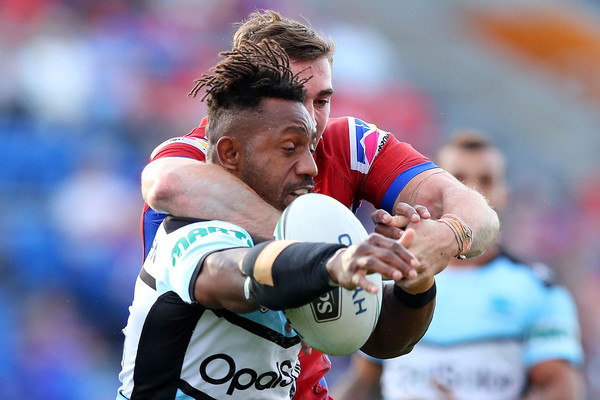 It was Holmes’ tenth try of the season, and the first time that Moylan had made five try assists in a single game, ushering in a rough period for the Knights, who put in tackle after tackle without getting anywhere. Errors from SKD and Griffin laid the platform for Moylan’s sixth try assist, as the ex-Panther sent through a crossfield chip from the ten, perfectly positioning it so that all that Ramien had to do was leap up on the try line and outjump Buhrer, who was struggling a bit at left centre after Ross had been taken off earlier.

The fact that Ramien will be heading to Newcastle next year didn’t make things any better. Nor did it seem to steel the Knights, who allowed Holmes to start the next set with a linebreak that took him over halfway up the field, where he offloaded to James Segeyaro, who made it up to Newcastle’s ten metre line in turn. While Chicko might have knocked the footy on, Holmes got a chance to complete his momentum a couple of sets later, beating Cogger to score in the left corner, with only an unlucky bounce off the uprights preventing Townsend bring the score to a half century. 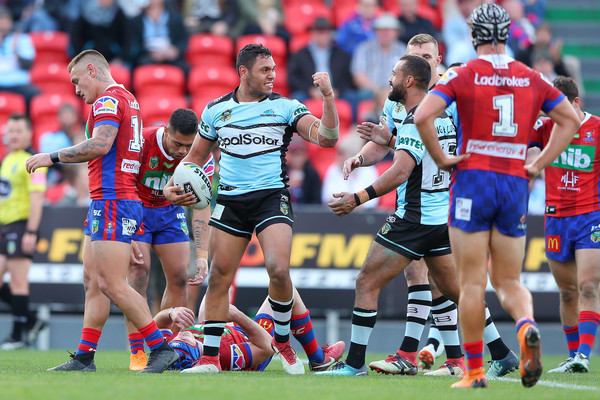 By the last ten minutes of the game, the Knights were beyond a consolation try – they just needed to score to maintain some dignity. Fortunately, Sione Mata’utia delivered at the seventy-second minute, but with Ponga missing the conversion, this was still a pretty lackluster effort. Newcastle will be looking for a comeback, then, when they take on the Eels at ANZ Stadium next week, while the Sharks will be raring for another rousing victoy when they take on the Bunnies on Friday night.