The traditional rivalry between the Tigers and the Bulldogs was augmented, on Sunday afternoon, by the presence of no less than four players who were all fronting up against their former clubs for the first time. With Josh Reynolds, Aaron Woods, Corey Thompson and Jeremy Marshall-King running out to the field in a new set of colours, the stage was set for an emotional game, especially given the spotty record of both clubs over the last two months of football. Add the recent announcements that Moses Mbye is set to join the Tigers and this probably felt closer to the more provisional black and gold atmosphere of 2017 than any other game so far this year. 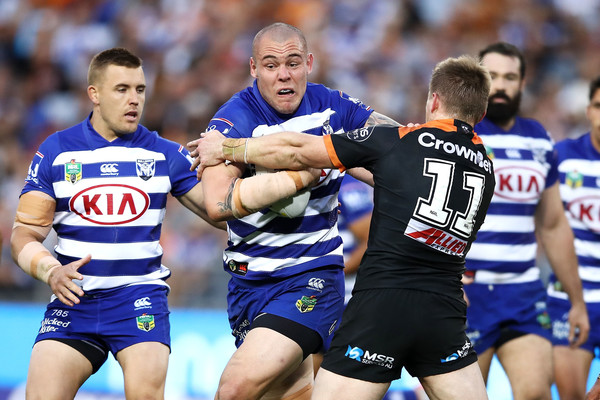 It was good for the Tigers faithful, then, that the home team opened by showcasing the same defensive aptitude that has been one of their signatures this season, after Jacob Liddle poked his nose through the line and then sent the footy right into the hands of Marshall-King, setting the platform for two successive Canterbury sets after Corey Thompson found himself trapped in-goal by a wall of blue and white jerseys. 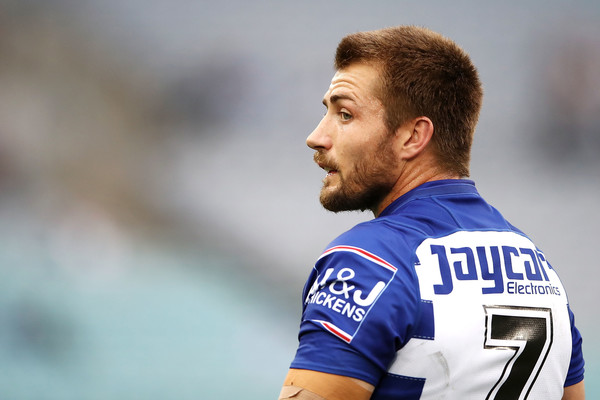 A penalty from Raymond Faitala-Mariner got the Tigers back down the other end of the field as soon as they’d regained possession, where they got their own back by trapping Marcelo Montoya in the in-goal area after a daring long-range kick from Luke Brooks. The cracks in their attack showed, however, when Michael Chee Kam coughed up the ball on the second tackle, giving the Dogs a fresh set of six, at the end of which a cut-out pass from Matt Frawley found John Olive on the wing, where the ex-Titan paused just long enough to get Esan Marsters interested before sending across a short ball to Brett Morris, who scored the first points right behind the posts. 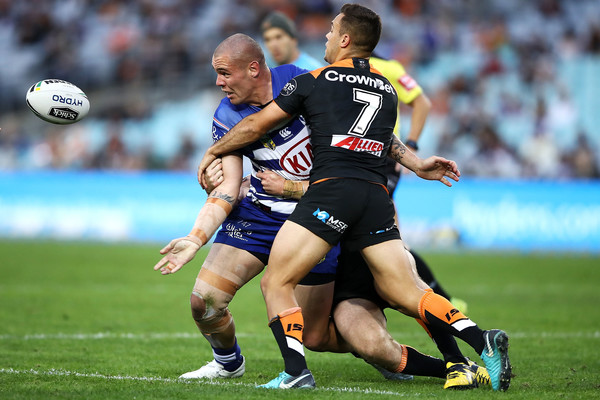 The next ten minutes were fairly frustrating for the Tigers, after a pass ricocheted off Liddle and headed half a metre back, only to be called a knock-on and grant the Bulldogs the scrum in the process. Whether or not Adam Elliot sent the ball forward a couple of tackles later, as the crowd seemed to assume, the fact of it ending with two more points for Canterbury, after a leg pull from Liddle, gave the Tigers a vendetta, although it took a while for them to translate it into points. For a moment, they seemed to have come close with a great pickup and offload from Brooks, a dropout from Benji and then a barnstorming run from Mahe Fonua, only for Chris Thompson to have obstructed Kieran Foran just enough for the try to be disallowed. 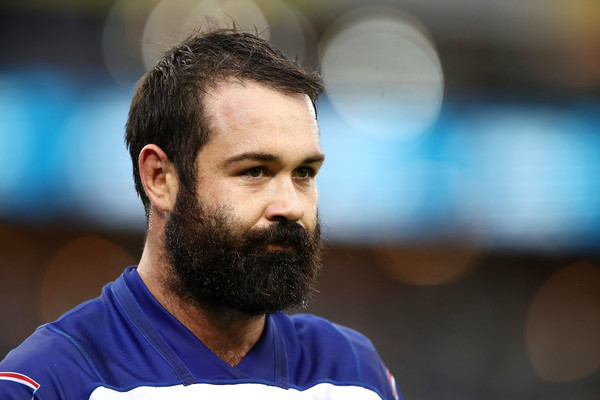 When the points did come, it was at the end of a fairly middling set for the Tigers, with a pass on the ground from Elijah Taylor to Brooks seeming to say it all as far as the next couple of tackles were concerned. It was the nadir of the slightly awkward deputizing of Taylor at dummy half, and yet the big lock now followed up with one of the best dummy half passes of the entire year, showcasing some extraordinary width to get the ball across to Benji, who followed suit with a superb cut-out ball that was every bit as good as Suliasi Vunival’s iconic pass to Josh Ado-Carr a few rounds ago. 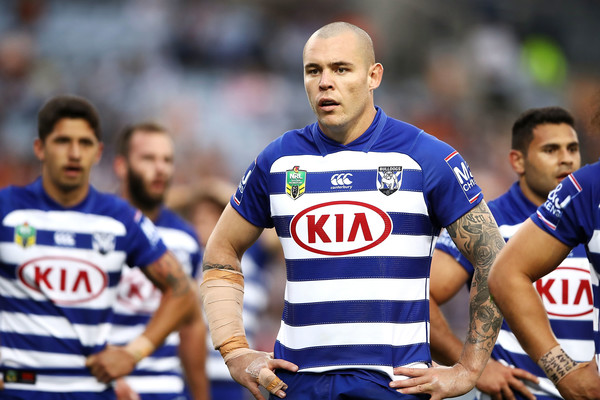 It was a rousing moment for the Tigers, and yet with Marsters missing the extras they were still only half the Bulldogs at 8-4, a gap that expanded to a converted try once Mbye slotted through another penalty goal following a hand in the ruck from Brooks. With Tui Lolohea knocking on the high ball shortly before half time in his first tenure in the fullback jersey since Round 5, the Tigers headed into the sheds considerably less exuberant than in the wake of Thompson’s unexpected four points. 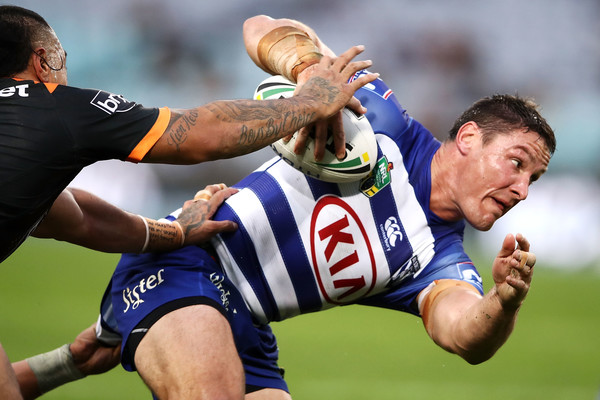 While the Tigers might have scored last, then, the Dogs still felt on top in the opening ten minutes of the second stanza, despite a terrific trysaving tackle from Brooks on Montoya after the big winger broke through the line and found space up the right edge of the field. All in all, this was probably the most underwhelming set of six for the Bulldogs so far, as all Montoya’s momentum was defused by a fairly underwhelming fifth tackle cleanup of Foran, with the addition of Josh Reynolds a couple of minutes later suggesting a possible shift back in the home team’s favour.

Sure enough, it was only a couple of tackles before David Nofoaluma crashed over in the right corner, grounding the Steeden beautifully despite a hard tackle from Matt Frawley. In a year in which Nofa has lost some of the cult status he once enjoyed at the Tigers, this was a critical rallying-point, especially since it came off a terrific string of passes from Brooks, Marshall, Lolohea and then Marsters, reaffirming the synergy of the Wests Tigers spine after Lolohea’s dreadful read under the high ball earlier on.

Nevertheless, the Tigers were still two points behind, and yet over the next ten minutes the Dogs slowly but surely started to show signs of flagging, whether it was Olive being shoved into touch, a forward pass from Kerrod Holland to Woods, or a handling error from Renouf To’omaga on his first hitup of the game. It all culminated with Brett Morris soaring up under the high ball but then popping it back to Marsters, who broke through the line, and offloaded to Lolohea right at the ruck.

For a moment, it looked as if the play might end here, but with Lolohea offloading to Fonua, and Fonua offloading to Brooks – all on the first tackle – the Tigers showcased their most stunning attacking sequence in weeks, with Reynolds doing his bit as well with a canny pass to Lolohea out of dummy half moments later. While Lolohea’s decision to kick from ten metres out, rather than run the footy, might have raised a few eyebrows, it paid dividends when Lawrence grounded it on the line moments before Fonua, Mbye and the entire Canterbury defence tumbled onto him.

The fact that Lawrence had only just landed the football before rolling over it made these four points feel all the more precious, and with Marsters adding the extras the Tigers were now four points ahead, on the back of one of their best team tries of the 2018 season, and the first to feature Reynolds at an integral moment – a nice touch for the Grub’s first game against the Bulldogs. A penalty goal for Marsters at the fifty-sixth minute gave the Tigers the chance to put them a converted try ahead, and yet by hooking it over to the right from a fairly direct kicking position Marsters returned possession to the Dogs for what felt like their most critical set of the night.

Failing to score at that moment, then, pretty much handed the game to the Tigers, who brought all their defensive acumen to bear on keeping Canterbury-Bankstown out over the final three minutes. A lost ball from the Dogs with a minute to go caused a heart-in-mouth moment, but a knock-on from Morris ensured that the Tigers were home when the final siren rang, maintaining their position in the top eight at the halfway point of the 2018 season. Meanwhile, this was a frustrating loss for the Bulldogs, who were the better team for much of the match, and are going to need to bring everything in the kennel when they face St. George following the bye.