Both the Tigers and the Sharks had a point to prove when they met at Shark Park on Sunday afternoon, following losses to the Roosters and Rabbitohs respectively last round. Slippery conditions and a strong wind made the game particularly tricky to negotiate, with the Tigers running into the breeze over the first half and the Sharks in the second, for a match that started off feeling more like a Tigers home fixture, only for the hosts to eventually take control over the course of the second stanza.

There were warning signs early on for the Tigers, when Luke Lewis chased down the second early-tackle kick from Cronulla, outrunning Tui Lolohea only to fumble the putdown just as the football was bouncing over the dead ball line. With a small obstruction from Luke Brooks along the way, the Tigers were fortunate to get possession, especially since a penalty from Lewis at the other end of the field gave Esan Marsters the first two-pointer of the afternoon. Nevertheless, Lewis made up for it almost immediately, thanks to a swift run at the other end that forced a flop from Josh Reynolds, allowing the Sharks to notch up their own penalty goal in turn. 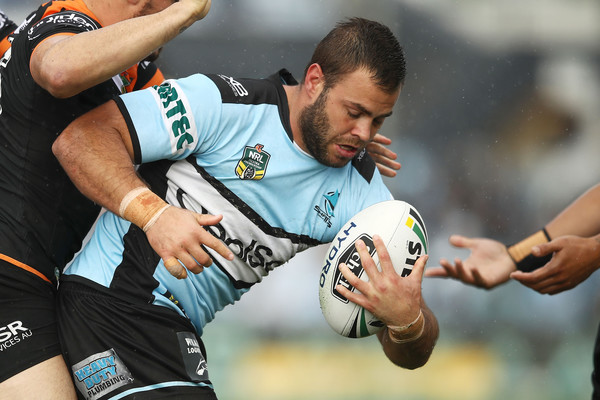 A fairly straightforward kick from Reynolds somehow disheveled Valentine Holmes a couple of sets later, leading to a bit of a drab patch for Cronulla-Sutherland that ended with Lewis being taken off for an HIA that ruled him out for the remainder of the game. Sensing the shift in momentum, Reynolds put in a deft left foot step to plunge over the line, only to be held up by a scrambling Sharks defensive formation.

Still, the ex-Bulldog had laid the foundation, with a quick play-the-ball allowing Elijah Taylor to crash over in his five-eighth’s shadow, taking Jason Bukuya and Valentine Holmes utterly by surprise for his best moment – perhaps his only really convincing moment – at hooker so far, if only because of how seamlessly he’d managed to blend the skill set of dummy half with his strength and size as a natural lock forward.

Yet another twist came, shortly after, when Wade Graham took a quick tap and slid along the grass right to the Tigers’ goal line. While he didn’t make it over, his speed and vision did manage to get Michael Chee Kam sent off for a professional foul with six minutes left on the clock. A set play one minute out from the sheds put Matt Moylan into open space, where he got the ball across to Edrick Lee on the left edge, but the Tigers chose this moment to showcase some of their best defence of the afternoon so far, thanks in large part to Corey Thompson, who put in a second tackle after a mass of black and gold jerseys didn’t quite manage to contain the ex-Raider. 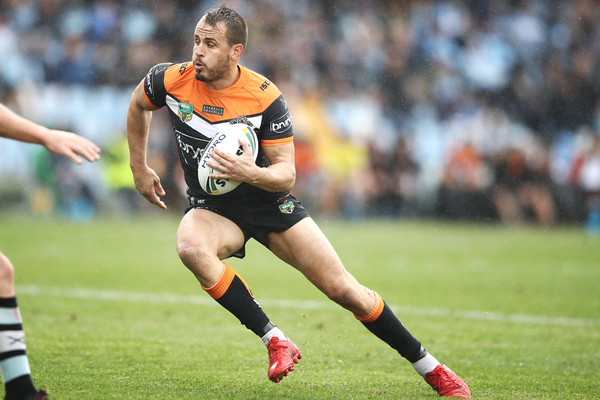 By the time they headed into the sheds the Tigers had kept the Sharks tryless, but the home team mounted a stunning comeback over the second stanza, starting with a brilliant pickup from Holmes after a Brooks grubber ricocheted off the uprights. Two bad moments – or unlucky moments, depending on how you see it – now ensued for Reynolds. The first was a missed pass, and simple enough, while the second came after Reynolds had been called to have intercepted a ball from Lee moments before both of them were bundled over the sideline by a combination of players from both sides, in one of the most visceral moments of the entire match.

So unlikely was the result that it almost inevitably galvanised the Sharks, and sure enough they were the next to score, as Paul Gallen put in his first try of the season and just the emphatic gesture that Cronulla needed from their skipper. Its simplicity was part of its power, as Gal simply slammed into Taylor, Lolohea and cousin Matt Eisenhuth, who initially appeared to have held him up, only for Gallen to simply reach out an arm and ground the point of the footy for the softest try of the game. 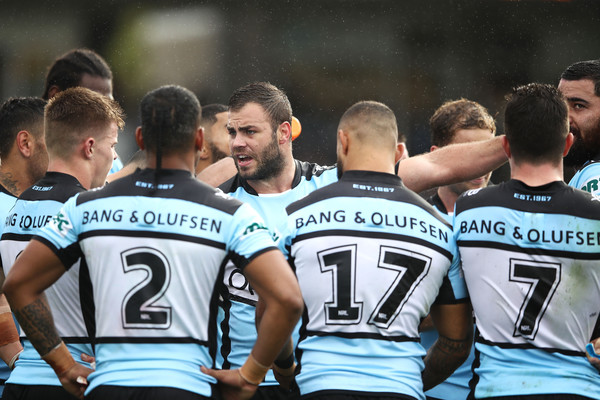 In slow motion, it was a bit of an indictment on Lolohea’s vision at fullback, since he had ample time and position to tuck a hand under the Steeden and prevent it hitting the grass. In total, however, it was a bit like Gallen had single-handedly showed his team, and the crowd, that the famed Tigers defence was nothing to be feared, a point he made even more emphatically a set later, when he collected a misplaced kick from Brooks on the full and popped it over to Holmes, who broke through the line and ran the length of the field to ground the football right beside the uprights. 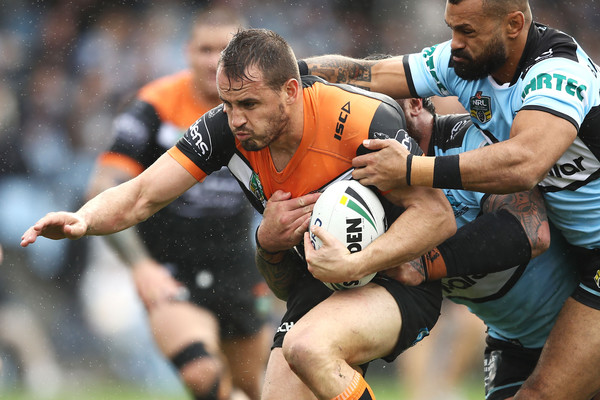 While the Maroons might have lost last week, Holmes’ mad dash still managed to invest the Sharks with a burst of Origin-like intensity and passion over the next few sets, and sure enough they scored three in a row, with Moylan now stepping into the spotlight with a beautifully timed wide ball to Lee. Running into the line and waiting for just the right moment, the ex-Panther sailed the footy over Chee Kam and Marsters, cementing the massive turnaround in possession and line speed in the Sharks’ favour during the second half, which felt like a totally new game of football.

The Tigers were the next to score, though, with Eisenhuth getting his own back on cousin Gallen with a cut-out pass to Brooks midway up the field. In this particular game, Brooks hadn’t showcased much of the growth he’s experienced in 2018, but this sequence was an exception, as the young halfback drifted to the left before flicking the Steeden back into Chris Lawrence, who broke through the line and got it across to Lolohea in turn, who slammed ahead to put the Tigers within two points of the Sharks once Marsters had added the extras with fourteen minutes on the clock.

The significance of seeing Lolohea score couldn’t be underestimated, given the way his uncertainty at fullback had shaped the Tigers’ game, especially in the second half, and for a moment it looked as if they might be about to effect a genuine comeback. But an offload from Andrew Fifita to Holmes sealed the deal at the seventy-fourth minute, allowing the Queensland representative to get it across to Jesse Ramien, who broke through a tackle from Eisenhuth to get the winning try of the afternoon.

The Sharks are going to have some good energy behind them, then, when they take on the Broncos for another home fixture at Southern Cross Group Stadium next weekend, while the Tigers have well and truly burst the bubble of their stunning winning streak from the beginning of the year. Their defence is still strong, but they need to reconsider Lolohea’s role at fullback, as well as Reynolds’ role in the halves, before they take on the Raiders for a home fixture at Campbelltown next Sunday.