The Dragons are well and truly back after their 24-10 loss to the Rabbitohs and their devastating game against the Panthers, both of which injected a bit of a slump into the splendid momentum they showcased at the beginning of the year. A two point win over the Cowboys was never going to be enough to restore that rhythm, and while beating the Sea Eagles might not be the biggest achievement at the moment, St. George nevertheless showcased enough speed, muscle and focus to make Saturday’s game at WIN feel like a crucial moment in the second half of their season.

The game started strong for the home team, with Gareth Widdop coming up with a deft strip on Jorge Taufua right on the St. George line, with a penalty from Jake Trbojevic immediately after gifting him the opportunity to compound it with a penalty kick. While a torrent of points would follow in the second stanza, the Dragons showcased their defensive acumen more over the next thirty minutes, starting with their response to a run from Daly Cherry-Evans up through the ruck that led to a linebreak from Frank Winterstein, who got it across to Tom Trbojevic. 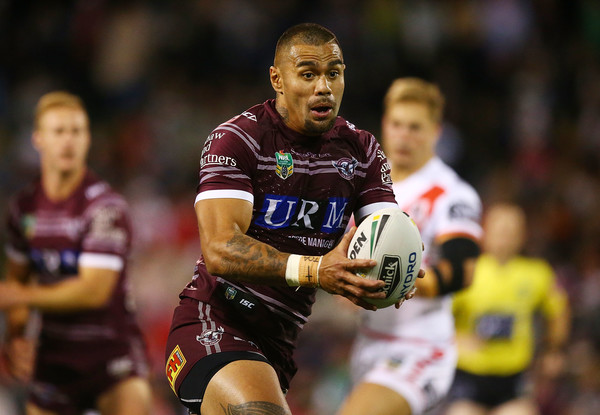 For a moment, it looked as if Manly were destined to score, only for Tom Turbo to shift the ball across to Tyson Frizell as if we were still in Blues mode. No doubt the big second rower had called for it, but the Dragons didn’t just rely on slyness and strategy, as became clear when Joel Thompson slammed through the line shortly after, lunging ball-first at the grass so decisively it seemed impossible he could be held up. Held up he was, though, and by Matt Dufty of all people, who brought all eighty-three kilos of his body weight to bear on turning the ex-Dragon on his back.

The Sea Eagles were actually next to clock up points, thanks to a penalty kick for Trent Hodkinson, but the Dragons scored the first try, on the third tackle after a fifth tackle kick ricocheted off Hodko, who was held to have played at it. Dufty now chose this moment to rival his epic defensive effort with his best attacking moment of the evening so far, collecting the footy on the right side of the field before stepping around Akuila Uate to put the big winger out of play, forcing Brian Kelly to defend by himself on the edge of the field, in a situation that had tryscoring written all over it. 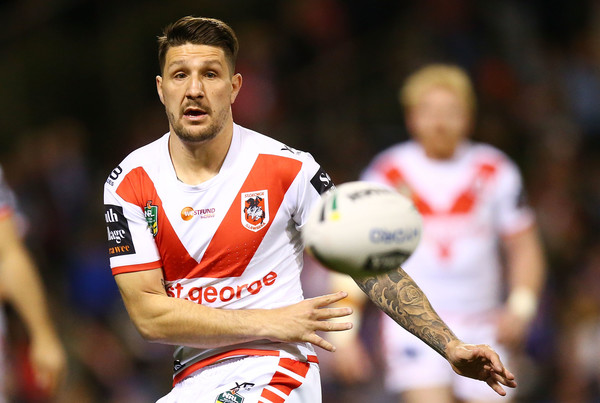 The fact that Uate was already defending out of position didn’t make things any easier for the Sea Eagles, while even Kelly’s best efforts couldn’t prevent Kurt Mann scoring on the wing, with the replay showing that Jason Nightingale’s replacement had bounced away from the sideline long before the Manly centre had tried to drag him into touch. It was a stunning testament both to Mann’s versatility in the backline and to Paul McGregor’s decision to open with him over the last two weeks, even if another botched conversion from Widdop preventing the lead being too emphatic.

A goal line dropout form Ben Hunt shortly after did a bit to change all that, however, as the ex-Bronco booted the ball perfectly to defy Uate to bring it back into the field of play. Over the next set the Dragons showcased some of their best line speed in weeks, culminating with a terrific one-man effort from Tim Lafai who collected the Steeden out of dummy half and followed up with a signature left-foot step to get around Brad Parker to put down the second Red V four-pointer in as many minutes.

The Sea Eagles weren’t done, however, since Tom Wright more than rivalled Lafai’s dexterity with some magic of his own, bringing the footy up to the ruck shortly after, and making as if to pass it backwards for Thompson to take the brunt of the Dragons’ forward pack, only to run it himself and dance around Widdop to put down the first try of his NRL career, in what initially seemed to be a resounding finale to the opening stanza for a Manly outfit that had been struggling to match the hosts. 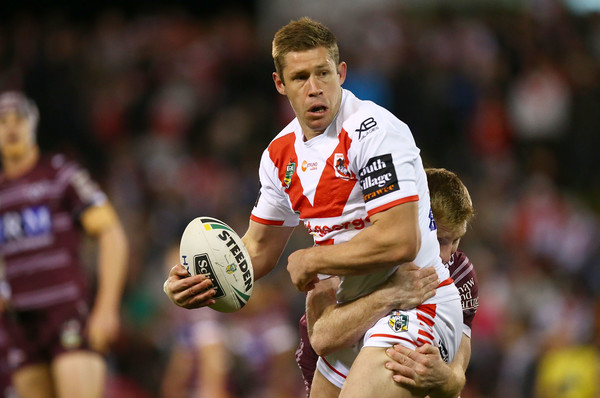 Yet in one of those twists that makes rugby league so entertaining to watch, this would not only be the final points scored by the visitors for the rest of the game, but was quickly succeeded by a try from Tariq Sims thirty seconds before the teams trotted back into the sheds. If Wright’s try had been all speed and dexterity, then the Dragons forward pack that he’d managed to elude responded with a show of sheer strength, as Paul Vaughan shifted the ball to the left edge of the field, where it passed through a series of St George hands before Sims busted through multiple tackle attempts by Taufua to ground the most resounding try of the entire evening.

From here, the game was all red and white, as the Dragons continued their tryscoring five minutes into the second stanza, once again off the back of some brilliant vision from Ben Hunt. Collecting the Steeden out of dummy half right in the left corner of the field, he took immediate stock of the cluster of Manly jerseys and responded with a ballsy play – a gentle little grubber that unassumingly bounced past Marty Taupau just as Widdop curved around Tom Trbojevic to get it to ground.

By this stage, the Dragons were demonstrating their versatility in tryscoring as much as the tries themselves, and they followed up this short-range spinal effort with another tale of two forwards, as Jack De Belin scooped up a lost ball from Kelly and stormed up the middle of the field like he was still in Origin mode. This time, it was James Graham who crashed over, taking the football at high speed, and twisting over despite Hodkinson doing everything he could to clean him up, and Tom Trbojevic coming over for good measure, only for the former Bulldog to outplay them both.

Between Vaughan, Sims, De Belin and Graham, there was a strength and focus to the Dragons’ attack that indicated just how much they’ve regrouped since their loss to Penrith, and if the game had ended here it would have been more than enough to cement them back in the spotlight. They continued to defend brilliantly, though, with Mann putting in a trysaving tackle on Kelly at the sixty-fourth minute that was just as good as Dufty’s earlier effort, given how much later in the game it occurred.

Moments later, an error from Nightingale seemed to have gifted a try to Addin Fonua-Blake, who had been subbed on a couple of minutes before, only for an obstruction from Thompson to keep Manly to eight points. Despite a few hiccups, including Hunt kicking straight to Tom Trbojevic, the Dragons stayed strong over the next few sets, with Mann preventing Kelly from scoring once again, this time by dragging him over the line, whileKelly himself made an unforced error shortly after, losing the football after a pass from Tom Turbo that could easily have led to a try.

It had been a trio of missed tries for Kelly – tries that just might have put Manly back in the game if they’d been properly executed – in an indictment on the Sea Eagles’ left edge that was enhanced by how well Mann had been playing over the night. Just for good measure, though, the Dragons’ right edge brought home the final try of the match, thanks to a huge crossfield kick from Hunt that Sims knocked back for Nene Macdonald to pick up and get down fairly effortlessly after scooting around Taufua.

That combination of Hunt, Sims and Macdonald spoke volumes of how well the different parts of the Dragons lineup had synced over the course of the night, in what has to be one of the very best games for the Red V this year. Sure, the Sea Eagles might not be at the top of their form at the moment, but this was still a resounding St. George victory, and will provide some food for thought as Manly start to think about their strategy when they take on the Panthers at Pepper next week.