Despite being plagued with a series of fairly horrific injuries, all of which had severe implications for Origin 2, Friday night’s game at Allianz was exactly what Roosters fans would be hoping for from a team this stacked with talent by this point in the year, especially given that the Panthers have had a pretty sweet run over the last couple of weeks, culminating with Nathan Cleary’s outstanding debut for the Blues. 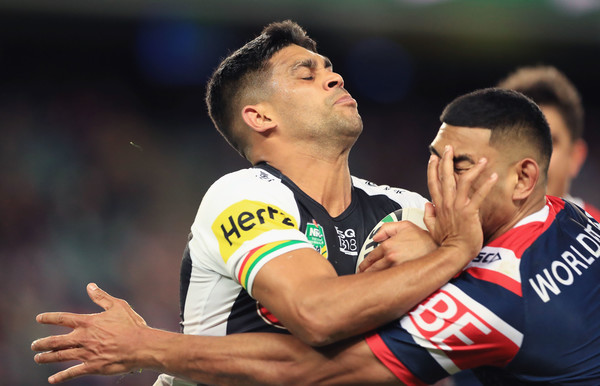 The Tricolors were the first to put down points, after James Maloney took the kind of risk that can make his game so great, but that didn’t pay off in this particular case – a wide pass to the edge of the field that Joseph Manu intercepted brilliantly, clutching the footy to his chest and nearly making his way to the try line before a desperate tackle from Dallin Watene Zelezniak, in the fullback jersey, brought him to ground. 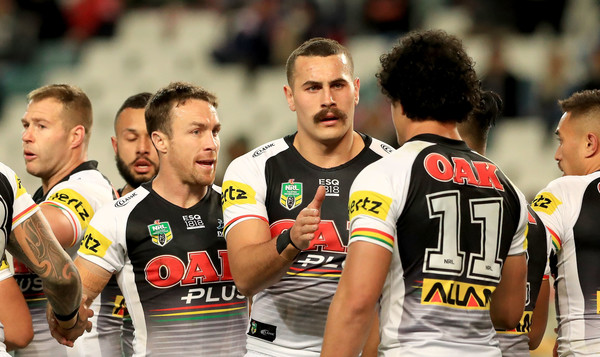 For a moment it looked as if Manu’s burst had been contained, but the young centre made the most of a disheveled Penrith side with a rapid play-the-ball to Victor Radley, who responded just as quickly with a brutal fend on Tyrone Peachey to get the Steeden across to Blake Ferguson, who just had space enough to ground it in the corner, despite some late pressure from Maloney speeding up the edge in an effort to make up for the poor judgement that had led to the four points in the first place. 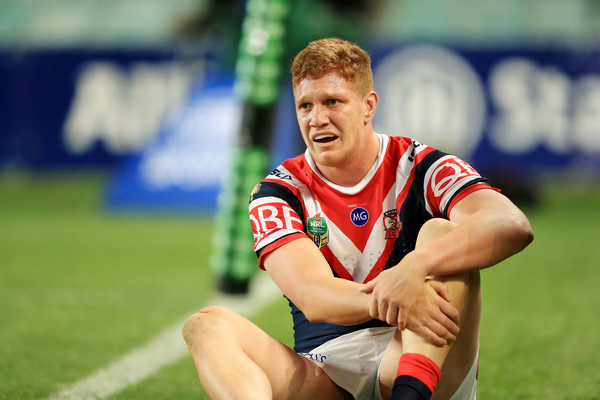 A period of total Roosters dominance ensued, as a penalty early in the next set got the hosts up the Panthers’ end of the field again almost immediately. Once again, this proved to be a watershed game for Radley, who was effectively the try assister this time around too, squaring up the defence and drawing in three Penrith jerseys before sending the football back to Luke Keary as Cooper Cronk ran a deft dummy line, leaving space for Isaac Liu to collect it from his five-eighth and tumble across. 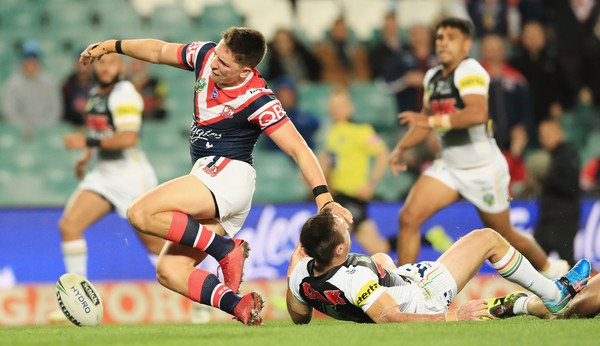 The first time around, Latrell Mitchell’s conversion had hit the uprights at just the wrong angle and intensity to ricochet between them, so there was something fortuitous about seeing his kick rub the posts on its way through this time – an indication that the Roosters were capable of correcting even the small blemishes in their form over these opening minutes. A good kick always gets a team doubly pumped, and, sure enough, the Chooks’ next try was only a couple of minutes away. 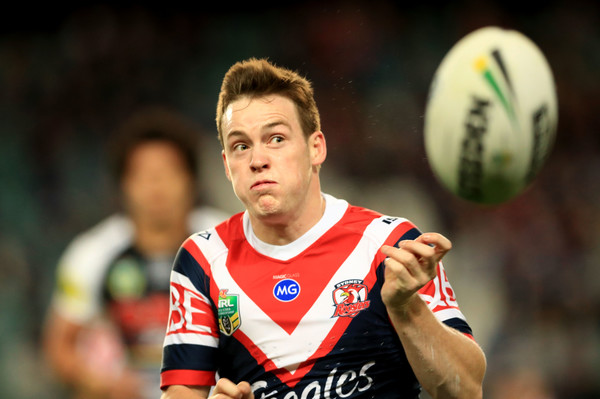 This time, it started with some good vision from Tedesco, who caught a Penrith kick in the in-goal area to grant his team a seven tackle set. At the other end of the field, Keary bookended a beautiful set play, sending a wide ball across to Mitchell, who drew in the defence and almost seemed about to bust through the tackle only to send a no-look flick pass back to Keary, who had made his way across the field and swung around on the other side of the play while Mitchell bought him some time. 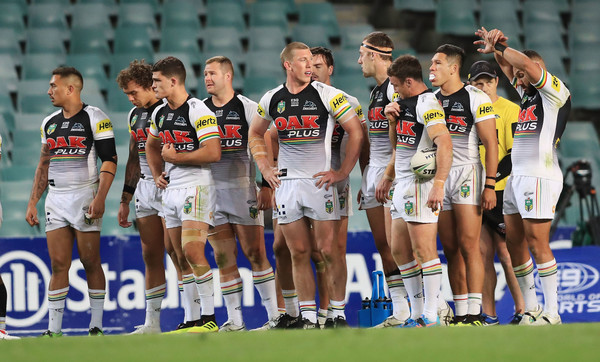 From there, Keary got a short ball across to Zane Tetevano, who crashed over on his first touch of the footy for his first try in almost five years. The big second rower had only just been subbed on after Dylan Napa had been taken off with an ankle injury, so it was rousing for the home crowd to see him paying dividends so quickly, in what felt like a third try for the Roosters on the restart, so efficiently had it been executed. 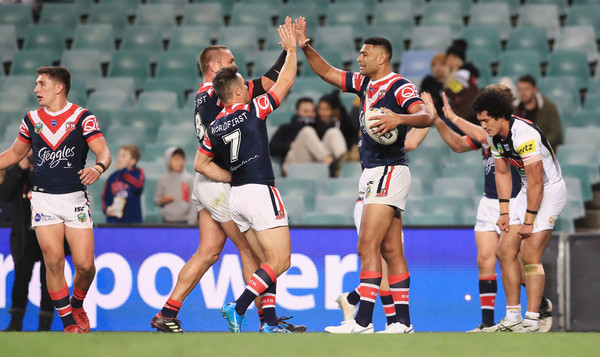 By this stage, it was clear that the Panthers needed to be the next to score to have any kind of voice in the game, since the Roosters had been absolutely dominant over these first twenty minutes. Moreover, they needed to provide a show of strength to rival the spectacle of Liu and then Tetevano showcasing their tryscoring acumen, meaning that even the Penrith backline needed to start taking hit-ups like forwards. 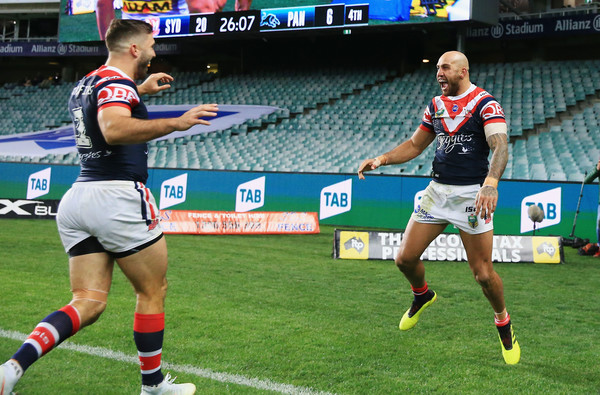 No surprise, then, that Dean Whare channelled the biggest men on his team with a hard run and twist-and-spin that made the most of some space opened up by Tedesco, who’d expected a kick at the end of the Penrith set rather than Whare’s best imitation of James Tamou or Reagan Campbell-Gillard. With Maloney adding the extras, the Panthers were two converted tries behind the Roosters, and if they’d scored again they would have been back in the game as the first act wound down. 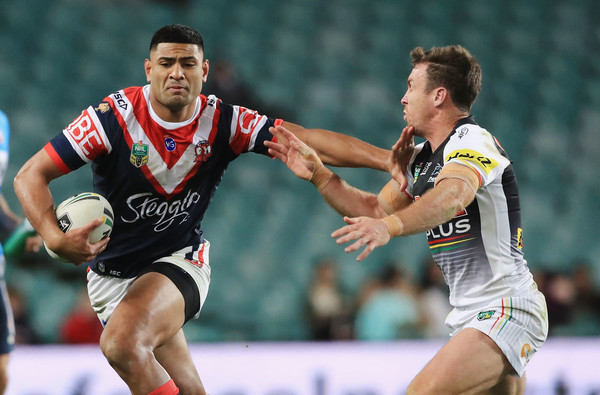 Yet an error from Corey Harawira-Naera now allowed Radley to edge even further into the spotlight, as the young gun broke through the line and was only just contained by Maloney and DWZ before he could put down four points of his own. Nevertheless, he got his team some momentum, and while Fergo might have cost the Chooks the end of a good set by prevaricating about whether to run or boot the football, a clumsy 40/20 attempt by Maloney got the Roosters the upper hand once again, as did a penalty goal following an early tackle from Maloney on Aubusson.

With Reagan Campbell-Gillard sidelined for an injured jaw things were looking pretty bad for the second best defensive unit in the competition as they headed into the sheds, although they came back more confident than might have been expected, resulting in a musical chairs of possession to open the second stanza. It started with a knock-on from Tedesco that the refs didn’t call, and was followed by a penalty from the Roosters at the very moment at which Penrith should have had possession. 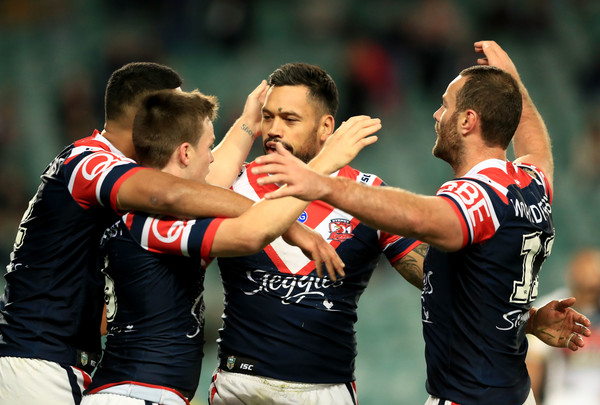 At the other end of the field, however, Tupou somehow passed the footy across to Christian Crichton after making it all the way to the ten, only for Isaah Yeo to cough it up after receiving it from his wingman right in front of the posts. The Roosters seemed resurgent once again, and yet the ever-elusive Ferguson somehow managed to botch a brilliant crossfield kick from Cronk a couple of minutes after, despite effortlessly outjumping Tyrone Phillips to get up to the football with time to spare. 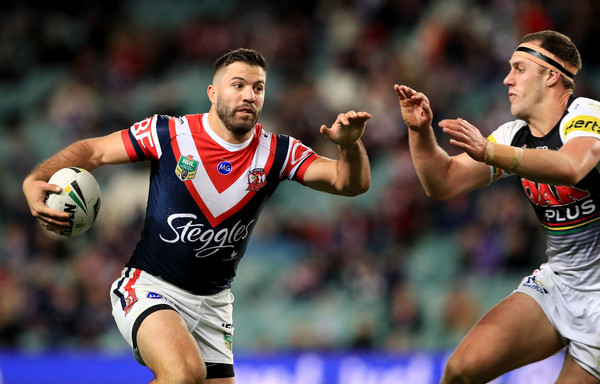 It was clear, then, that the Roosters needed to reset if they were going to continue the splendid tryscoring spree of the opening act, and a beautifully weighted 40/20 from Cronk did just that, making a sorry contrast to Maloney’s effort with the boot twenty minutes before. That energy was momentarily absorbed, however, by the sobering sight of Mitchell suffering a serious neck injury that saw him stretchered off the field, but able to gingerly sit up in the changerooms as the game started to close. 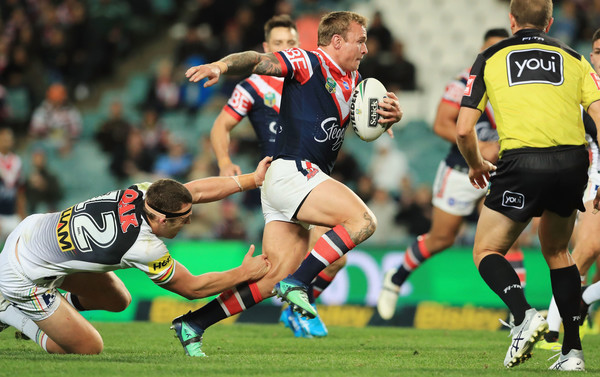 Seeing their Blues star taken off the field just seemed to strength the Roosters, and especially Ferguson, who really refined his game over the next couple of sets, which culminated with a huge sweeping play from the Tricolors over to the right side of the field. While the entire backline was terrific, it was Manu who really shone, collecting the Steeden from Tedesco before a Gidley-like move in which he fended off Peachey with his left while executing a one-handed flick pass back to Ferguson to his right, with Fergo adding the extras from a difficult angle as if he was their regular kicker. 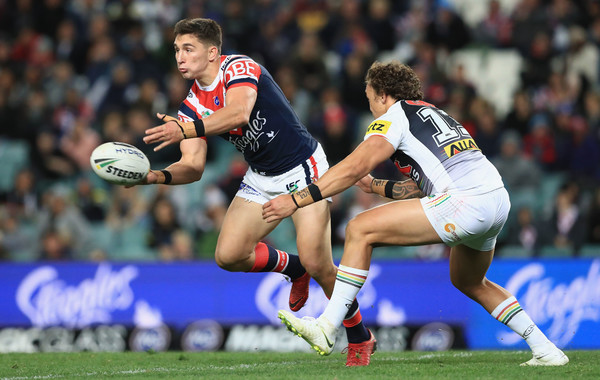 If Manu’s try assist was impressive, his trysaving tackle on Tyrone Phillips a couple of minutes later was arguably the most rousing moment of the entire night for Sydney City. All of a sudden, the Panthers seemed to have found the second wind that so often makes them comeback kings, as Whare and DWZ ferried the football up through the middle of the field, before sending it across to the left in what would have been one of the team tries of the 2018 season if Phillips had got it to ground. 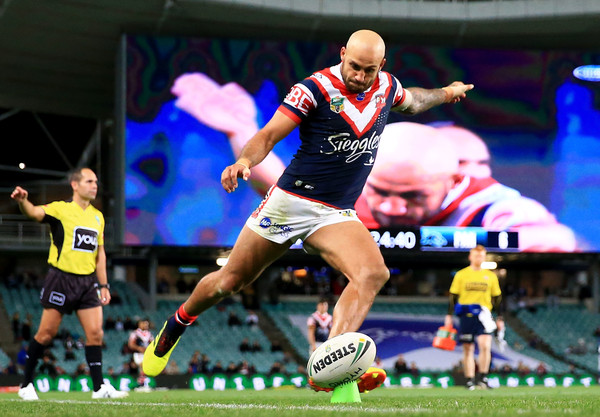 Unfortunately for the ex-Bulldog, however, Manu was in place, applying pressure at just the right speed and moment to ensure that Phillips’ arm and right knee remained between the ball and the ground at all times. It was a sudden turnaround for Penrith, and made more sudden by Peachey being sent to the bin a moment later, gifting the Chooks a good tryscoring opportunity once Jared Waerea-Hargreaves called out a knock-on from Maloney during a big hit-up and was rewarded for his trouble, in a game that seemed fated for the Roosters in every way. 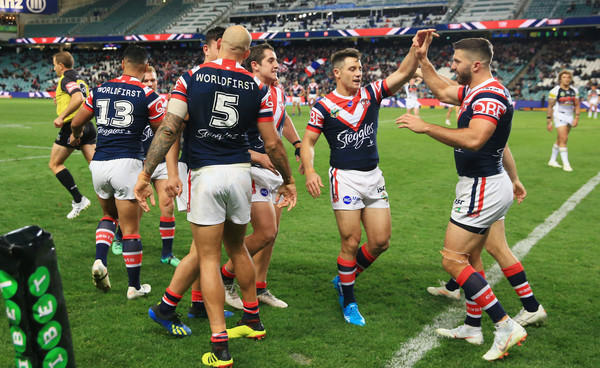 The next and final major play of the night was bookended by Tupou, who put in a couple of big fends at the start of the next set to ensure that Teddy almost broke through the line. A couple of tackles later, some terrific vision from Radley out of dummy half led to a cascade of short plays from Keary, Aubusson and, finally, Tupou himself, who smashed down the final four-pointer of the game with rapid efficiency. 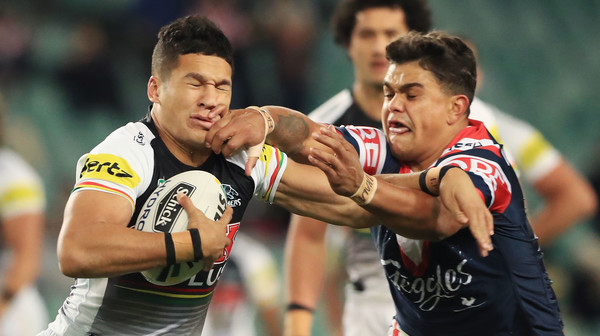 It was an appropriate ending for a game in which Radley had been able to showcase his versatility and vision more than any other this season, and a great way for the Roosters to stockpile confidence as they prepare for their match against the Storm at Adelaide Oval in two weeks, despite the sobering sight of Mitchell being led off the field. Meanwhile, the Panthers will need to regroup, although all eyes will be focused on Origin in the short term, since the injuries to Napa, Campbell-Gillard and Mitchell mean this game has more ramifications than any other in Round 15 for the second match of the series, and the prospect of a second win for New South Wales.