With only one win to their name since Round 9, and a couple of pretty heartbreaking losses in between, the Cowboys were desperate to make the most of a home ground advantage when they took on the Warriors in Townsville on Thursday night. The Warriors have been a bit more secure in their wins over the last couple of weeks, but they haven’t come up with anything commensurate to their disastrous 32-0 loss to the Roosters at Mt. Smart in Round 10, and so were still raring for a massive victory.

While the Warriors may have eventually dominated the first stanza with a terrific trio of tries, both teams were a bit messy over the opening minutes, especially in one sustained sequence that started with Gerard Beale being called offside just after securing an intercept. With the football in their hands again, the Cowboys made another assault at the line, and concluded with Te Maire Martin kicking for Kyle Feldt in the corner, only for the big winger to knock it backwards rather than catching it.

At first, North Queensland seemed to have auto-corrected when Enari Tuala scooped up the Steeden on the sideline, but he passed it straight to Adam Blair, who made his way back down the other end of the field. Any momentum that the Warriors might have built was quashed shortly after, however, when Issac Luke took just a bit too long for a dropout kick, gaining the Cowboys a penalty and the first two points of the night. More pain for the ex-Rabbitoh came a few minutes later, when RTS managed a great pickup under a difficult bounce and Luke built upon it with a terrific linebreak only to lose the footy in the midst of a tackle from Gavin Cooper.

With Tohu Harris penalised for stripping the ball from Scott Bolton three tackles into the next set the Warriors seemed to be losing control of the match, only for a series of penalties from Johnathan Thurston, Gavin Cooper and Coen Hess to allow them to apply one set of six after another. While the Cows put in some valiant defence, stopping Beale a foot from the line and holding up Agnatius Paasi during a massive twist-and-spin right under the posts, it felt almost inevitable when Ken Maumalo outplayed Feldt in the corner off the back of a deft short pass from RTS, given the amount of momentum that New Zealand had generated in these successive attacks. 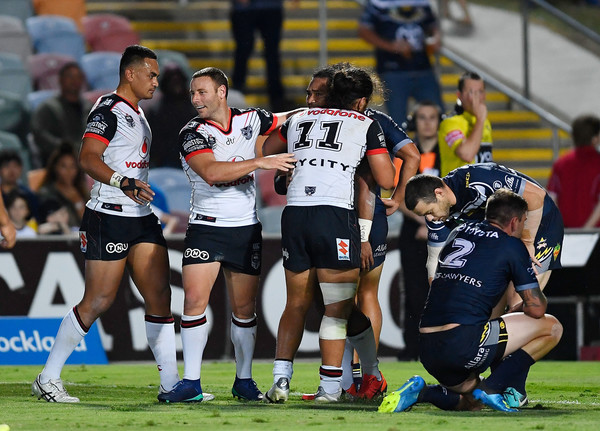 They didn’t take long to score again, either, and once more it was RTS and Maumalo who were the key playmakers. This time, Maumalo started it with a beautiful take under the high ball in which he managed to get two hands to it and break away from a sea of Cowboys jerseys. A tackle later, RTS put in the linebreak of the night, dodging his way through the ruck, getting away from Bolton and then abruptly changing direction to elude Michael Morgan – a spine-tingling masterpiece of footwork that felt like a direct throwback to his prodigious moments at the Roosters.

It was the kind of play that galvanises an entire team around it, so it felt appropriate that Solomone Kata’s try at the twenty-seventh minute was both facilitated by a short ball from RTS, and itself felt like a condensed version of RTS’ try – a reinvention of Roger the Dodger as a burly forward rather than a lanky back. Collecting the footy from his fullback right on the line, Kata fended off Javid Bowen, outsped Feldt, steamrolled over Ben Hampton and fell to the ground before getting up again and slamming the Steeden to the grass for the gutsiest four points of the entire evening.

By this stage things were starting to get desperate for the Cowboys, especially as Morgan was led off the field with an elbow injury and Feldt was forced to shift into the fullback jersey. Luckily for the home crowd, then, North Queensland made a statement before half time, building more and more pressure until an inside ball from Te Maire Martin saw Jason Taumalolo absolutely monster RTS, smashing him to the earth before getting back up for a quick play-the-ball with no Warrior at marker.

The Cowboys lost no time in shifting the ball across to the right side, and even if they hadn’t have scored this fluid passage of play would have been some consolation to the North Queensland faithful. It was capped off, though, by a beautiful no-look cut-out pass from Feldt, who kept his eye square on the defence but sent across the ball of the night to Javid Bowen, who slammed over in the wing to get some catharsis after having been collateral damage for Kata’s massive effort a few minutes before. 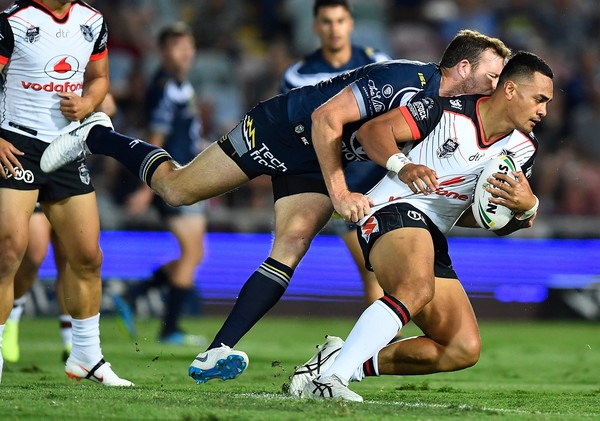 The Cows continued that energy shift at the beginning of the second stanza, starting with a great effort from Jake Granville that helped set the platform for Feldt’s first try of the night. Finding himself confronted with Maumalo right on the line, he took the big winger’s measure, pausing and making up his mind whether to shift to left or right, before scooting around him and into a combined tackle from Kata and Blair. 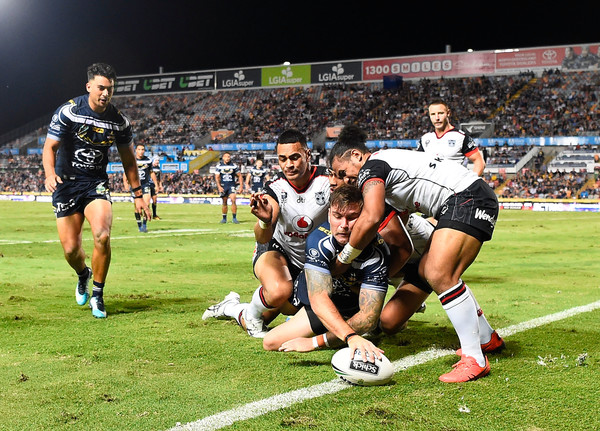 That didn’t stop Feldt, however, who muscled his way to the ground and reached out a hand to score, in a stunning vision of how he can acclimatise to fullback when the occasion requires. Yet with handing errors on the next two sets from the Cowboys – first from Hampton, then from Molo – and a penalty against Hess early in the next set, the Warriors regained momentum immediately and took the two shortly after. They seemed set to be the next for four, too, after Taumalolo was called out for not being square at marker and Kata smashed through the line, only for a hamstring issue after a low tackle to cause him to drop the football with nobody ahead of him. 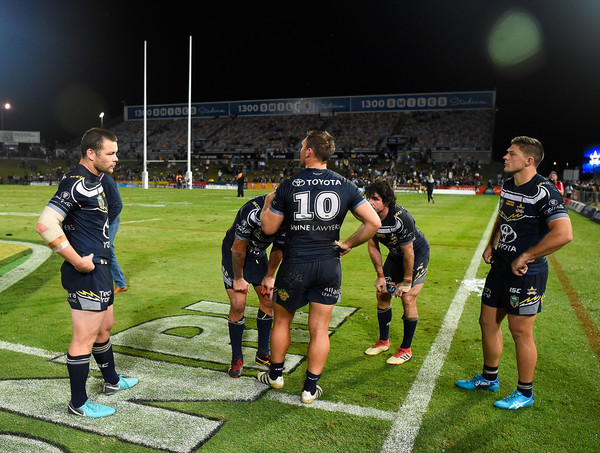 It was a big let-off for North Queensland, especially since Kata could just as easily have fallen onto the footy as he hit the turf. They had a mirror move themselves on the next set, as Feldt surged ahead as the Steeden careened into the in-goal area only to knock it on as he tumbled towards it. Nevertheless, the Cows were dominant over the next couple of minutes, building a scintillating sequence on the back of an error from Isaiah Papali’I that saw them put more and more pressure on the visitors. 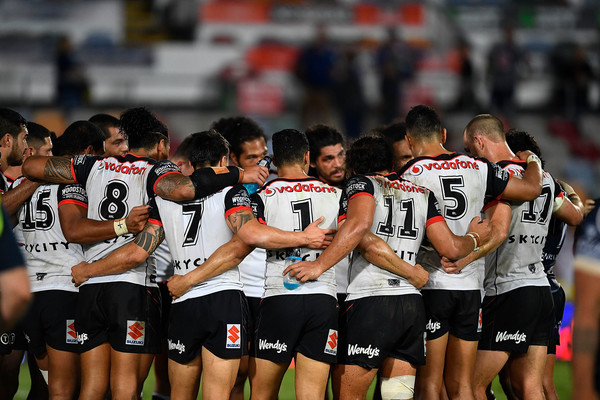 First, a grubber from Thurston was played at by Luke, getting the Cowboys six again, while another grubber from J.T. saw Taumalolo trap RTS in the in-goal area, after Blake Green tried and failed to clean up the football before it crossed the chalk. A dangerous tackle from Peta Hiku on Kane Linnett compounded the Cows’ advantage, in what was quickly coming to seem like a total reversal of the splendid showcase of New Zealand possession that had culminated with Maumalo’s opening four points.

For a moment, a hard kick from Granville seemed to cancel all that, forcing Jensen to bump it into touch, but then RTS lost the football on the fourth tackle of the next set off the back of a bad pass from Green. Taking stock of the situation perfectly, Martin collected the Steeden on the full, momentarily bobbled it, and then secured possession, before storming back down the field, waiting until the very last moment before sending an ambitious harbour bridge pass across to Feldt at maximum speed. 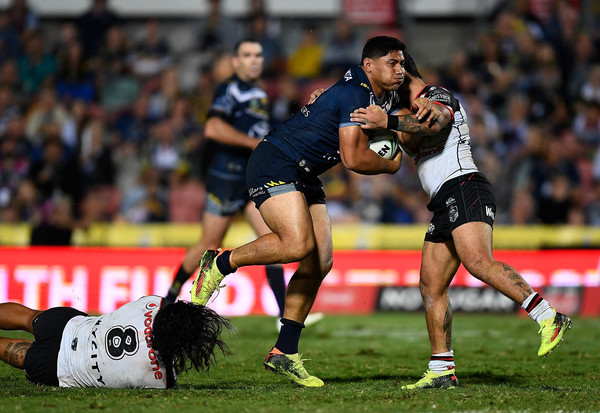 If Feldt had just scored as a fullback, he was now absolutely scoring as a winger, solidifying the Cowboys backline and capping off one of their most decisive periods of play in weeks. Once again, though, Thurston missed the conversion, and while he might have made up for it by crossing over himself shortly after, the video replay showed that Taumalolo had lost the football into James Gavet immediately before. 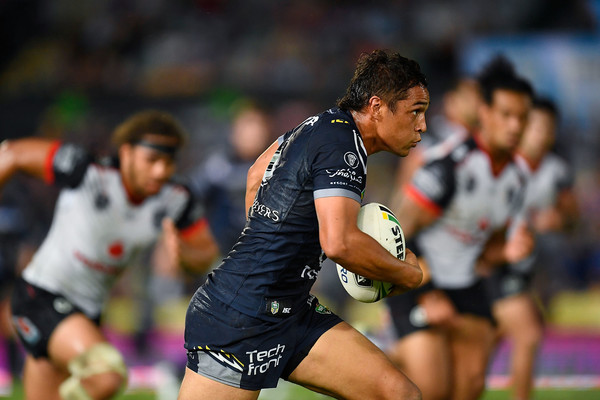 The last chapter of the game arrived, then, with four points the difference, only for some verbal dissent from Feldt to get the Warriors a penalty kick and make it a converted try – a disappointing conclusion to the two tries that he’d scored to get the Cowboys back in the game. An error from Cooper with seven minutes left on the clock marked the end of the last North Queensland surge, while a field goal from Shaun Johnson a minute out from the end meant that the Warriors were home safe.

It was an appropriate conclusion for a match that had been so close at key moments, and yet the Warriors are going to be looking for a more decisive victory when they take on the Sharks at home in two weeks. Meanwhile, this was yet another agonising loss for the Cows, who are going to be looking to take advantage of the local Queensland spirit when they take on Souths at Barlow Park at the end of Round 16.