The Knights had only enjoyed one win in their last six games when they rocked up at McDonald Jones Stadium on Sunday afternoon to take on the Melbourne Storm. Even without Billy Slater at fullback, the purple army were the clear favourites, despite a couple of losses over the last couple of weeks, forcing Newcastle to grind in and make the most of their underdog mentality to try and come away with the competition points. A strong wind plus a bright, glary day made the contest doubly challenging, especially in terms of the hosts’ kicking acumen and attacking strategy. 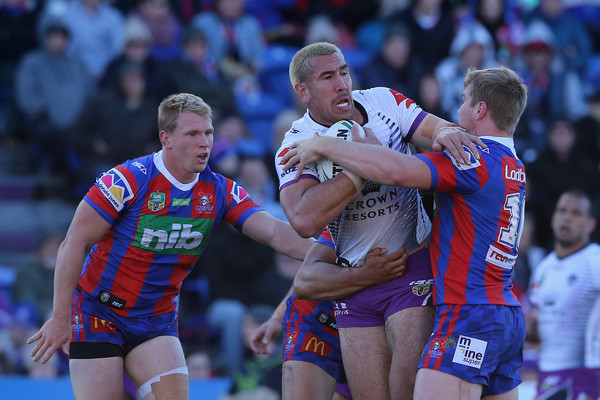 Over the first ten minutes, the Knights showcased some solid defence, from a hard tackle from Sione Mata’utia on Cameron Munster, to a clinical shutdown of Will Chambers at the back end of a set that had started with Kalyn Ponga forced to chip early in the tackle count under some considerable pressure from the Storm. They struggled, though, with their attacking game, so it wasn’t all that surprising when Ryley Jacks scored the first points of the day, off the back of a great piece of play from Kenny Bromwich, who’d started in the no. 13 jersey and proved his mettle by bringing the footy up to the line and drawing in Lachlan Fitzgibbon with a deft left-right step, before sending a short ball across to his halfback for the first four points. 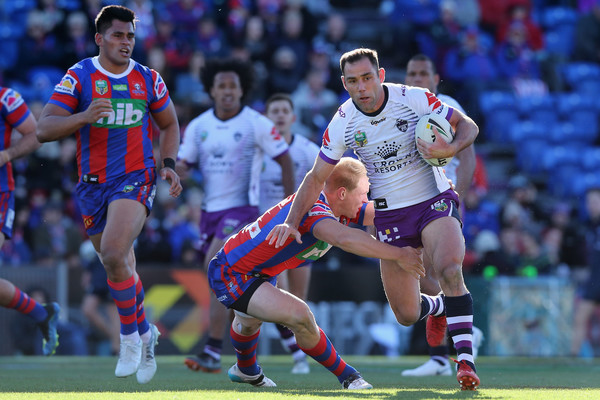 Cameron Smith added the extras a minute later, but the six-point deficit didn’t seem to immediately galvanise the Knights, who continued to struggle to end sets convincingly, most notably in a messy sequence that saw the ball move through Ponga and then Mata’utia only for Shaun Kenny-Dowall to lose it on the edge of the field. Things started to solidify after a while, though, thanks in large part to Ponga, who had the presence of mind to let a Smith grubber bounce twice right on the line as Melbourne drew closer, only to scoop it up and get back into the field of play. 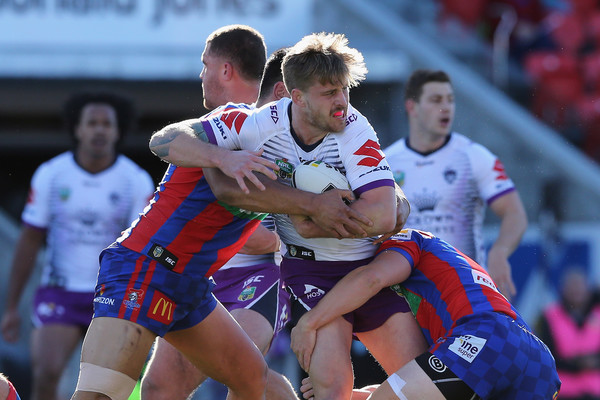 It was a classy move, since he might well have been driven back into the in-goal area if he’d collected the Steeden and then made a run for it – a dexterous piece of judgement that seemed to centre and strengthen the Knights, especially once Ponga caught Smith’s subsequent fifth-tackle kick on the full. The momentum continued to escalate for the hosts as a slow peel from Munster granted them a penalty, and while Herman Ese’ese might have lost the ball early in the next set – the sixth time that Newcastle had turned over the footy in a collision – a mistake from Curtis Scott ensured that the Knights were able to pick up their momentum and have another go. 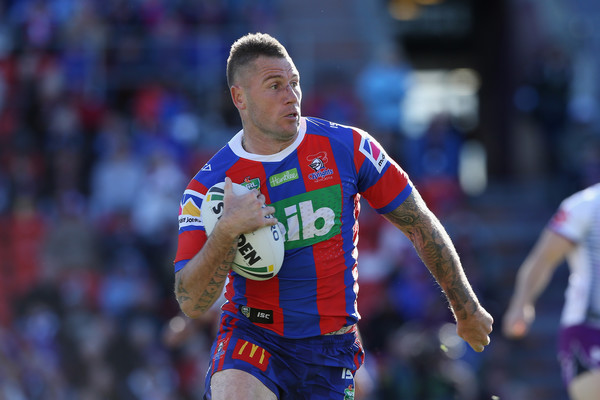 From there, back-to-back penalties for Christian Welch and Brandon Smith – both for slow peels – led to an official warning for Cameron Smith, providing a platform for Slade Griffin to almost make it to the line. Once there, he stretched out a hand but couldn’t quite ground the footy, yet made up for it immediately with a quick-play-the-ball for Ponga, who dummied left and then bent his head down and burrowed through a sea of purple jerseys, to bring the score to 6-6 once he’d added the extras. 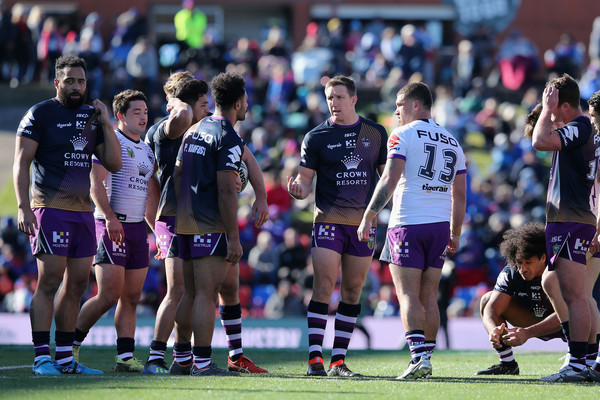 It wasn’t the kind of linebreak we’ve come to expect from the young fullback, but it still felt like an apt summary of the vision he’d brought to the field over the preceding ten minutes. The Knights consolidated around it, too, and seemed on the verge of scoring shortly after, thanks to a good offload from Chris Heightington and a hard run from Jack Cogger that demanded Hughes bring all his strength to bring him down. A deft grubber from Connor Watson seemed set to bring it all together, only for Josh Ado-Carr to boot the footy right back to him, as Munster jumped in for it. 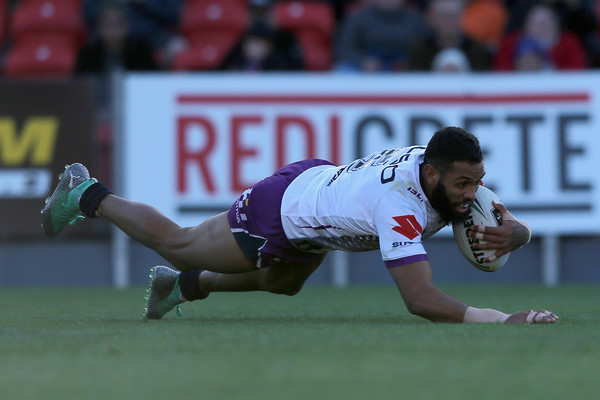 No doubt, Munster was lucky to find the Steeden right where he needed it, but he made the most of his luck as well, scooping the football up and starting off down the field, before sending it across to Ado-Carr at the thirty, who put in a good dress rehearsal for Origin 2 as he sped down the left side of the field as Ponga desperately tried to bring him to the turf. It was the first try for the Fox in three games, but it didn’t really feel like a comeback – just another of the effortless displays of speed that makes him such an asset for the Storm backline, especially in Slater’s absence. 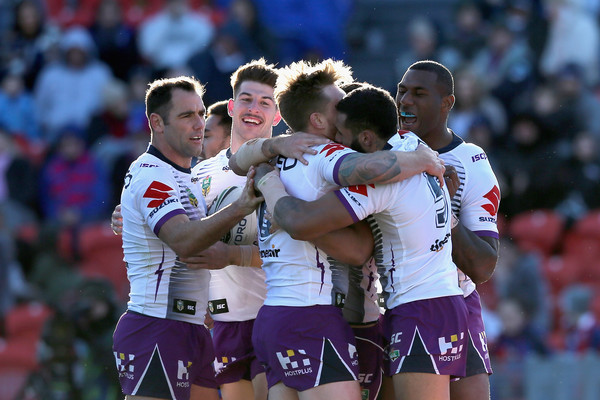 A penalty goal right on the siren meant that Melbourne had well and truly recovered their lead, although Newcastle still weren’t that far behind, as Watson started off the second stanza with the most dazzling linebreak of the afternoon thus far. The Knights didn’t take advantage of it immediately, but its energy percolated into the next few sets, culminating with a terrific sequence of passes that saw the footy move through Cogger, Ponga and finally Corey Denniss, who sent Ken Sio across for four. 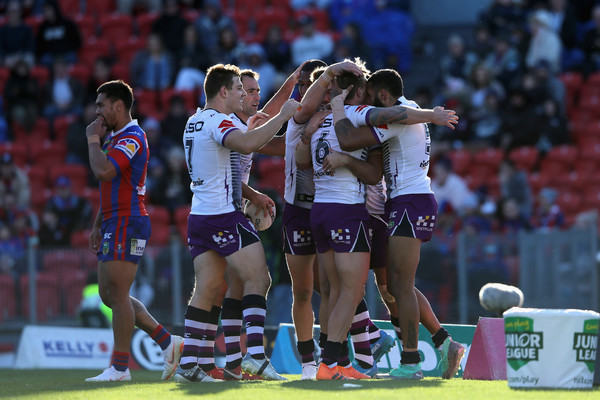 Special mention has to go to Ponga in particular, who put in the skip that is fast becoming one of his attacking signatures – a kind of stationary goose-step right on the defensive line that drew Chambers in this time around, making space for the second half of the sequence that got Sio his four-pointer. Admittedly, he didn’t manage to add the extras, but the wind and the angle made the kick all but impossible, and the Knights were doing pretty well to be only four points in the red. 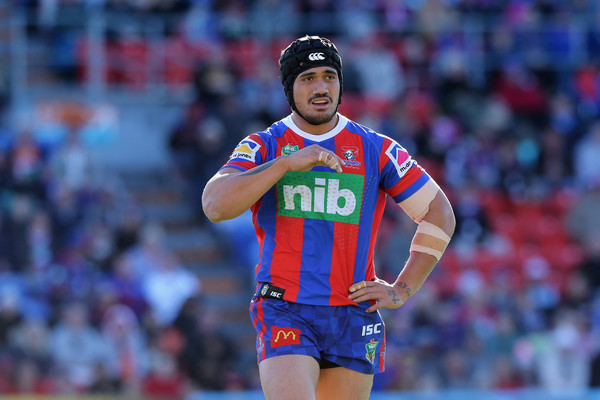 Conversely, the Storm must have been a bit surprised to be only a try ahead by this point, so it made sense that they drew upon the formula of their second try for their third – a short pass from Munster to Ado-Carr that was riskier than it looked given the windy conditions, and then another sprint from the Fox to get down four more points. With the wind behind him, Smith had no trouble adding the extras, clocking up another two in what would turn out to be a perfect fixture for him with the boot, save for the final penalty kick that could have put the Storm a clean twenty ahead. 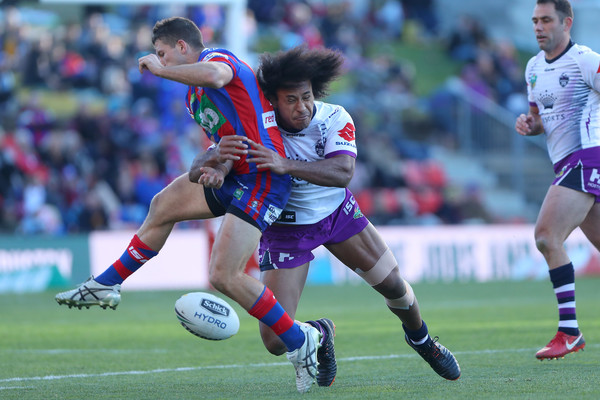 That just made the Knights’  woes all the more visible, as a kick from Cogger bounced off Aiden Guerra shortly after, and the Storm took up the bout of possession that would culminate with their final try of the afternoon. This time, it was Suliasi Vunivalu who got the chocolates, thanks to an enormous pass from Smith that cut out five other players, and a misread from Cogger, who moved back after Jacks caught the footy as if expecting a kick, only for the Storm halfback to keep on moving the ball over to the right, where Vunivalu got one of his cleanest putdowns in weeks. 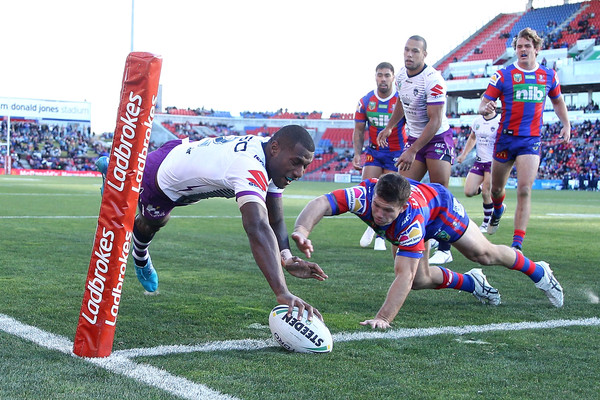 For the next twenty minutes, the Knights valiantly tried to come up with another of the bursts of energy that had narrowed the scoreline over the course of the game. The Storm held onto their advantage, however, coming away with an eighteen point win – an important rallying point for when they take on the Roosters at Adelaide next week for what is technically a Sydney City home fixture. Meanwhile, the Knights really didn’t do all that badly, considering the respective positions of the two teams on the ladder, and will be looking to channel their best moments when they take on the Bulldogs next Saturday afternoon, for the third in their string of home fixtures.