With the sole exception of their loss to the Bunnies in Round 13, the Sharks have remained undefeated since their game against the Dragons in Round 6, so they were looking to continue that streak when they took on the Broncos at Southern Cross Group Stadium on Saturday evening. Brisbane, however, have had a bit of a spottier run, with their loss to the Storm last week bringing back bad memories the 20-34 result in Round 7, making this a pivotal moment in their second half of 2018 football. 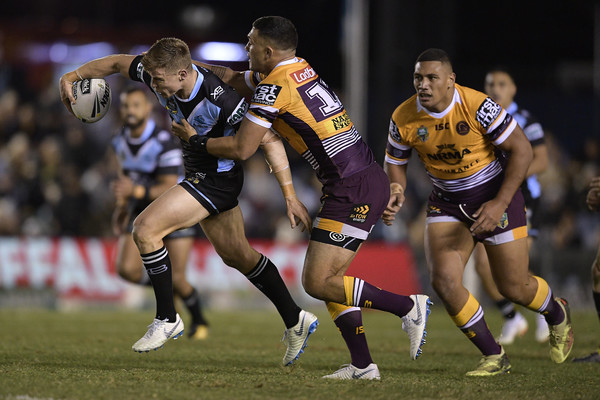 The first fifteen minutes were some of the fastest footy of Round 15, as the Broncos scored their first try without having had a tackle, or any real possession, after a classic charge down from Tevita Pangai Junior. Coming right into Chad Townsend as he was making the first kick of the night, the young Brisbane forward put his hands in the air and bashed the ball back in the other direction, before storming forward to collect it quite leisurely, despite a disarmingly oblique bounce, and put down a try.

It was so sudden that the Sharks felt as if they’d made a considerable achievement to simply get some momentum a couple of sets later, only for an error from Ricky Leutele to enable a Brisbane intercept and a renewal of their splendid spectacle of the opening minutes. This time it was Anthony Milford who got the chocolates, zigzagging his way through the defence and edging around Andew Fifita before ducking under a one-on-one clash from Valentine Holmes to ground the footy right beneath the posts, setting up Jayamne Isaako for his second conversion of the game. 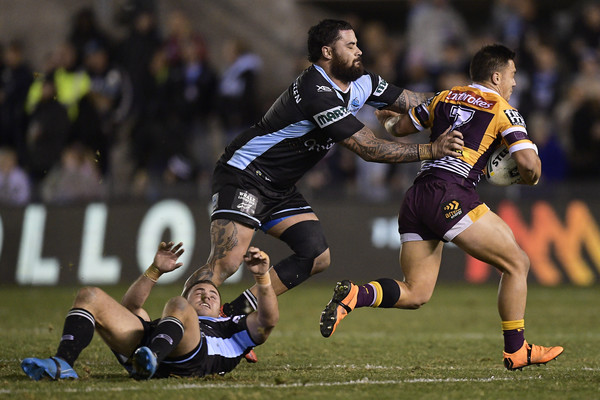 Usually the losing team needs a dramatic gesture a bit later in the game than ten minutes in, but Cronulla were already losing the energy stakes, so it must have been cathartic to the local crowd when a daring run from Sione Katoa reinfused the home team and saw Milford sent off the park for a professional foul. Taking immediate advantage of the twelve-man team, the Sharks sent the football across to where Milf would have been if he was still defending, where a sublime catch-and-pass from Holmes – the ball barely contacted him – got Jesse Ramien his fifth consecutive try. 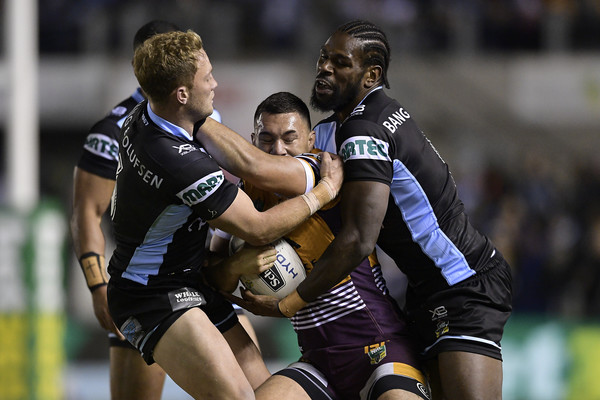 The Broncos were next to get points on the board with a penalty goal, but their focus started to slacken here, resulting in a superb harbour bridge from Townsend to Katoa that would have been a try for the ex-Panther had not a mild obstruction from Luke Lewis caused it to be called back. With Pangai Junior taken off the field following a suspected injury, those splendid opening minutes seemed to dissipate further, and while James Roberts might have contributed a terrific run a minute and a half out from the siren, dodging around one defender after another before almost breaking through the line, it all came to nothing when Jayden Su’A lost the football.

Brisbane continued to struggle over the second stanza, suffering a series of incomplete sets that saw the Sharks gradually consolidate and eventually score the next two tries. Two massive efforts from both teams defined these opening minutes, the first from Lewis, who barged his way up to the right corner while continually seeming on the verge of sending the footy across to the edge, only to make a run for the line himself. While he may have forced the Broncos to scramble their defence more than at any other point in the evening, it cost him a calf strain, forcing Matt Prior to sub onto the field in his place, as he was led, gingerly, limping to the sheds.

The next big effort was a superb linebreak from Kodi Nikorima, followed by a pass to Sam Tagatese, only for Townsend to put in his best defensive move of the night to shut down the play. Subbed on prematurely, Prior now had one of his more forgettable sequences of first-grade football, dropping an early pass from Townsend, and then granting the Broncos a penalty goal after he was called offside during a strange, chaotic sequence in which Roberts threw a clutch pass across the sideline.

Nevertheless, the Sharks gradually felt as if they were regaining control of the ground, and a linebreak from James Segeyaro cemented it, setting the platform for a rapid sweep to the left that saw the footy move through Fifita, Holmes and, finally, Leutele, who scored the try he’d been raring to put down all night. In fact, so close had both teams come to breaking through the line, or capitalising on linebreaks, that there was something cathartic about this try for the game as a whole, which took on a new energy, intensity and focus as the Broncos prepared to defend their line again.

They perhaps weren’t prepared for Cronulla to cross over on the restart, however, as Prior now made up for his early fumbles with a brilliant offload to Segeyaro ten metres out from the chalk. Once again, Chicko built a superb platform for the next four-pointer, spinning around 180 degrees for a Benji-like flick pass to Wade Graham, who’d read the play perfectly and ran a hard diagonal line to collect the Steeden and ground it beside the posts as if this was the oldest move in the book. 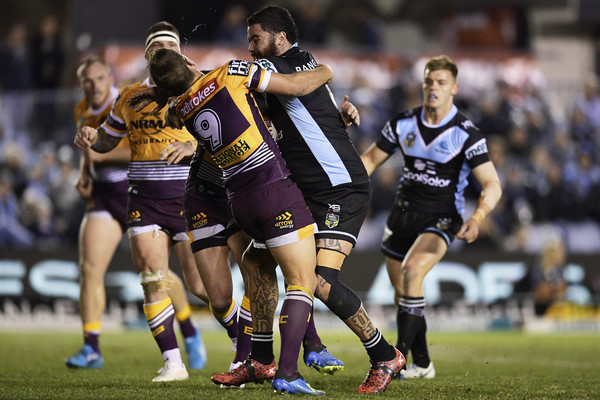 If the NRL has trick shots, then this was one of them – a move that seemed more and more unlikely in slow motion – and yet the Broncos responded with an equally unbelievable move a couple of sets later, thanks to a pair of double-pumps from Milford and then Boyd that set Corey Oates up for one of the most incredible putdowns of his career. Dragged entirely over the sideline by Ramien, Oates twisted himself around backwards and reached out a hand to ground the footy as his entire torso was half a foot from the grass on the other side of the touchline, making you wonder just how many more moves he has up his sleeve if he keeps on evolving.

It was a bitter pill to swallow for Sharks fans, especially because the replay suggested that there was a pretty good case for Boyd having set it all up with a forward pass. To make matters worse, too, these were the last points of the game, which would have been a terrific Cronulla comeback if Oates hadn’t pulled off this final freakish move. The Sharks will be looking for a consolation win, then, when they take on the Warriors at Mt. Smart next week, while the Broncos will be anxious for a less precarious victory, and a more decisive gesture for their second half of football in 2018, when they take on a confident Raiders outfit at Suncorp Stadium on Saturday.