One of the most catastrophic home games in Gold Coast history unfolded at Cbus Super Stadium on Sunday afternoon, as the Titans allowed Brisbane to come away with five unanswered tries and three penalty goals for a 0-34 lead. It was a big boost for the Broncos, whose nine wins in 2018 have all been by nine points or less, and who were missing James Roberts, Andrew McCullough, Corey Oates and Josh McGuire for Origin duties.

Scoring at regular intervals over the afternoon, from the first five minutes to the last five minutes, Brisbane never felt as if they weren’t in total control of the game, making for a showcase for Broncos talent rather than a genuinely suspenseful match. An opening error from Keegan Hipgrave paved the way for the first Brisbane try, thanks to a superb combination from Kodi Nikorima and Kotoni Staggs. Finding himself with the football on the Broncos’ right edge, Nikorima fed it out to his centre, who got a right arm around AJ Brimson to send it back to Nikorima in turn.

From there, it was simple enough for the Brisbane halfback to cross over, and for Jamayne Isaako to add the extras. While the try was followed by a handling error from Tevita Pangai Junior, and then a penalty for Nikorima for a hand on the ruck, this just commenced a pretty consistent pattern over the course of the game – the Broncos continually containing and compensating for whatever occasional errors they might happen to make in a free-floating and supremely confident manner. 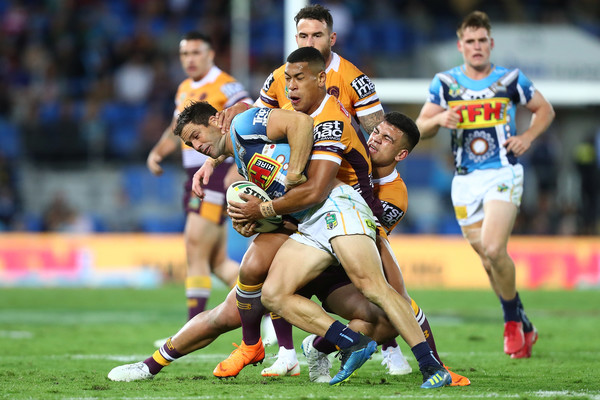 Sure enough, while the next set might have featured several tryscoring opportunities for the Titans – starting with a quick catch-and-pass from Nathan Peats – it all came to nothing after a huge hit from Jonus Pearson that totally floored Michael Gordon. Some high contact from Hipgrave early in the next set piggybacked the Broncos back down the other end of the field, where some holding down from Kevin Proctor set up Isaako to boot through the first penalty goal of the match. 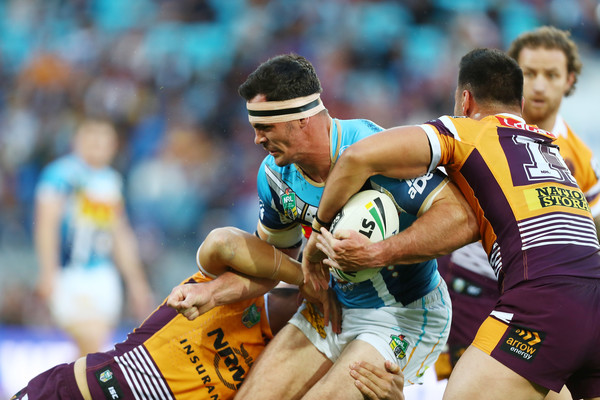 A linebreak from Kevin Proctor on the next Gold Coast set was called back after a forward pass from Ash Taylor, who was clearly starting to feel the pressure of the Brisbane attack. Shortly after, Taylor tried to reset things with a 40/20 kick, only to send the ball out on the full, after some pressure from Pangai made it more of a banana kick than he was intending. It felt almost inevitable, then, when the Broncos scored again twenty minutes in, as Kotoni Staggs went from try assister to tryscorer.

This sequence also marked Milford’s return to form, as he drove the football right into the line before offloading to Jayden Su’A, who sent an equally impressive flick pass back to Staggs. Gordon now suffered his second epic putdown of the night, as the big Brisbane centre encountered him in the corner, wrestled his way out of the tackle, and actually flung the ex-Rooster to the ground, before lunging back to the inside of the field to put down the next four points for the Broncos.

Isaako now had to kick from the right sideline – his worst position of the year, since he’s only shot through 4/11 kicks from this angle. For a second, it looked like another botched kick, only for the ball to bounce off the left uprights and through the gap, putting the Broncos fourteen points ahead. Everything in the game seemed to be going their way, as their control of the match was so assured that it barely registered – or barely felt surprising – when Darius Boyd crashed over ten minutes out from the siren.

Like the previous two Brisbane tries, there was no great showmanship – or need for showmanship – here. Instead, this was excellent organisation, pure and simple, and a testament to how well the Broncos spine can sync up when they’re all feeling the momentum. Milford started the play by sending the Steeden across to Nikorima, who dummied in the left hand, showing it for a daringly long period of time, before popping a short pass back into Boyd.

With Will Matthews caught napping, Boyd was able to weave right through the centre of the Gold Coast defence to score beside the posts, setting up Isaako to add the extras once again. The Broncos didn’t score again during the first stanza, but they still felt in control of the game, as they did when they returned from the break. The second half now proceeded much as the first half had, except that it took the Broncos longer to score a try, partly because the Titans got a few more lucky breaks. 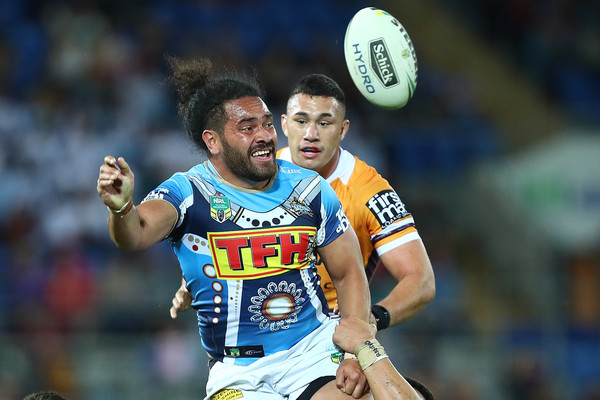 The first came when a miskick from Taylor ended up bouncing perfectly for the Titans, only for Will Matthews to knock it on during the pickup. The second came when Korbin Sims was pinged for a pretty questionable high tackle, with Gordon almost crashing over on the Gold Coast left edge early on the next set. The third came at the end of that set, when Taylor’s grubber ricocheted off Joe Ofanhengaue’s boot. Although Ofahengae was deemed not to have played at the football, he was called offside just before the ball made contact, turning what initially appeared to be a changeover into another set of six for the home team.

As with the first half, however, the Titans were unable to make the most of any of these opportunities, even if these lucky moments made a bit of a dent in the Brisbane field position. The other main reason why it took so long for Brisbane to score was they they opted for penalty kicks for the two big advantages that they had – first, on the back of a slow peel from Moeaki Fotuaika, and then following an escorts penalty from Taylor in an effort to clean up and contain a Milford kick. 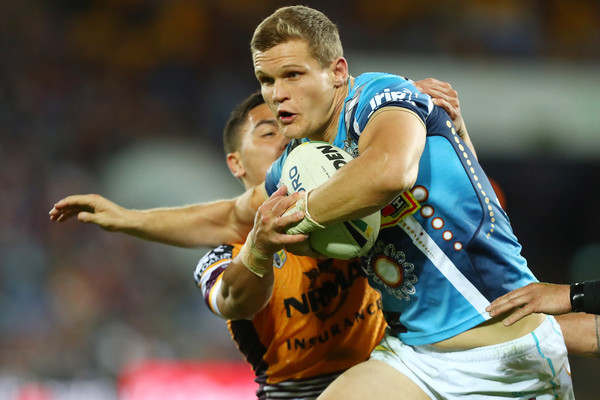 It had been a bit of a frustrating night for Taylor generally, given the kind of Origin-worthy performance he would have wanted to showcase during this week in particular. Seeing this sign of weakness from the young halfback seemed to be the burst of adrenalin that the Broncos needed, and a set later David Fifita scooped up a lost ball from Michael Gordon, before a short pass from Jake Turpin sent Ofahengae through Nathan Peats and Mitch Rein to score on the left side of the uprights. 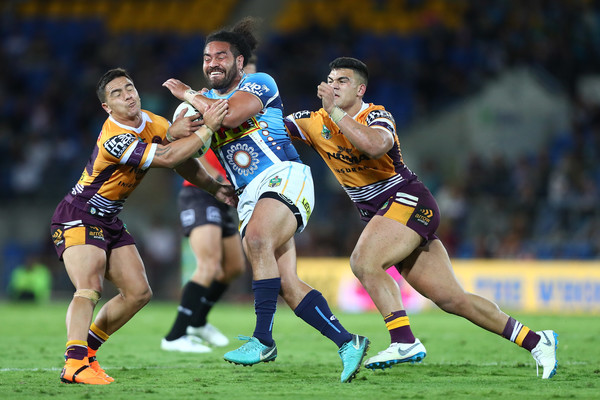 The last twenty minutes of the game were a low point during the 2018 Gold Coast season, as the Broncos grew more assured with each passing moment – so assured that it didn’t even seem to make a difference whether they scored any more. In retrospect, too, their two recent penalty kicks didn’t feel like a concession, or a gesture of defeat, but a mark of confidence – proof that they weren’t too anxious about racking up the tries, and were secure enough to play a more conservative game.

Five minutes out from the end, Jonus Pearson sealed the deal with four more points, in what had been a stunning night for the Brisbane young guns – almost as impressive as the display that the next generation of Roosters would put on the following weekend. Meanwhile, this was a fairly dispiriting night for Gold Coast, who were hoping for a rousing home game against Brisbane, and a powerful wake-up call for Ash Taylor, proof of how critical he is to the focus and organisation of his team.