Last night’s game in Newcastle was one of the most tightly paced this season, with both the Knights and Eels showing some of their strongest form in 2018 to come away with three tries each. Only a penalty goal made the difference for Newcastle, who notched up a two-point win that felt all the more cathartic given how hard they struggled for it over the course of the match. Combined with Mitchell Pearce back on deck, this turned out to be one of the really galvanising nights for the Knights this year, and a key rallying-point as they face the back end of their season.

That said, the game started with two stunning tries from Parramatta. The first came after Clint Gutherson accelerated up the left edge, before sailing the ball over Jarryd Hayne, Brad Takairangi and Marata Niukore to find George Jennings. Fuelled by that energy, Mitchell Moses milked a penalty on the third tackle, and a tackle later Siosia Vave crossed over for one of the Eels’ softest tries in weeks, despite several lines of Newcastle defence intervening to try and hold him up.

The first line of defence was Nick Meaney, but he was no match for the rollicking prop. The second line was Josh King, who came in to assist his fullback, but ended up in just the right position for Vave to pivot around him on his way to the line. The third line of defence was Aidan Guerra, but by the time he leapt onto Vave it was too late, and the massive Parramatta unit had crashed down beside the posts for the first four blue and gold points for the evening.

This was a bit of a comeback from Vave after a spotty season, during which he’s only played four other games due to concerns about his fitness and stamina. With Gutherson booting through the extras, the Eels got rolling again, only clocking up their first error eight minutes in – a forward pass from George Jennings to Marata Niukore. They regathered immediately, and a couple of sets later Hayne set up one of their best plays of 2018, this time on the other side of the field.

Collecting the footy in the middle third, Hayne started to challenge the line, getting around one player after another until it felt as if he must edge out the entire Newcastle defence. Dodging and weaving past Herman Ese’ese, Mitch Barnett, Mitchell Pearce, Corey Denniss and then Pearce once more, he was perpetually on the very cusp of breaking through the line, only to pop the footy across to the right extremity of the park, where Bevan French took possession for only the briefest of moments before kicking it down field at speed.

Although Pearce made a valiant effort with the kick chase, Moses was better, catching the Steeden on the first bounce, despite a difficult angle, to score four more points for Parramatta. If the first try had been spectacular, then this was sublime, as Moses, French and Hayne momentarily became the spine that the Eels have been longing for all season. No play in 2018 had so eloquently captured what Parra had been hoping for from Hayne after his return, which perhaps made it all the more devastating when Newcastle eventually won by two points. 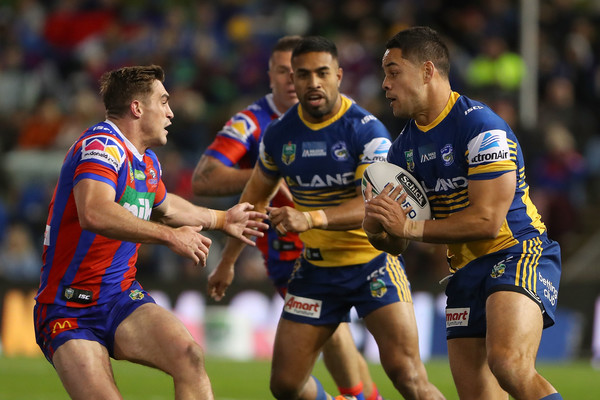 Those two points went begging now, as Gutherson shanked the Steeden away from the uprights despite a pretty manageable angle for the conversion. After such a dominant opening display from the Eels, the Knights needed to regather – or get lucky – and as fate would have it both of those things happened a couple of sets later. Four tackles in, Danny Levi sent a superb long ball across to Pearce on the Knights’ edge, giving the ex-Rooster space for a grubber that was too awkward for Gutherson to quite contain.

What happened next was as much a matter of luck and skill, as Conor Watson contested the football and then slammed it to ground beneath Bevan French, only for the referees to make a call of no try, on the grounds that the Newcaste five-eighth had made a double knock-on. In slow motion, however, it was clear that the Steeden had only hit Watson on the chin, rather than on the arm or hand, clearing the Knights for their first four points of the night, and then six once Ken Sio added the conversion.

The game settled into more of a level playing field over the next twenty minutes, but the Eels had enjoyed a bit of a top-heavy half, and started to tire as the siren drew near. First, Moses dropped an offload from Takairangi only forty minutes out from their line; then, on the next set, the Knights forced a second error from Peni Terepo right on their line. As if to set themselves against the Eels’ superb long-range try that had moved through Hayne, French and Moses, Newcastle now executed their next sequence right on the chalk, bunching in the defence until they barely had room to move. 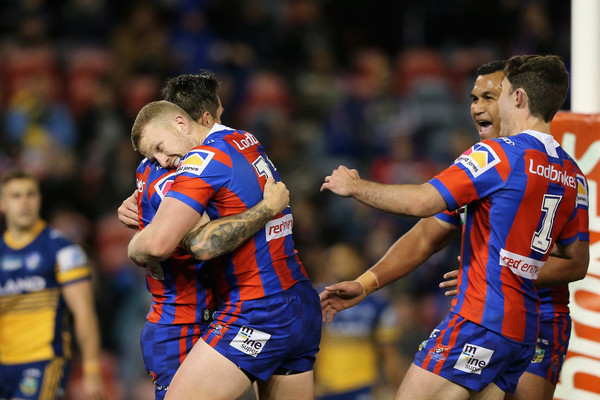 Like the Knights’ first try, this next sequence was equal parts skill and luck, which is to say that the home team had to make their own luck against such a determined Parramatta outfit. Surrounded by a maelstrom of blue and gold defenders right on the line, Jacob Saifiti offloaded back to Meaney, who sensed that the Eels were about to close in on him too, and so sent the footy frantically over to the right edge of the field. 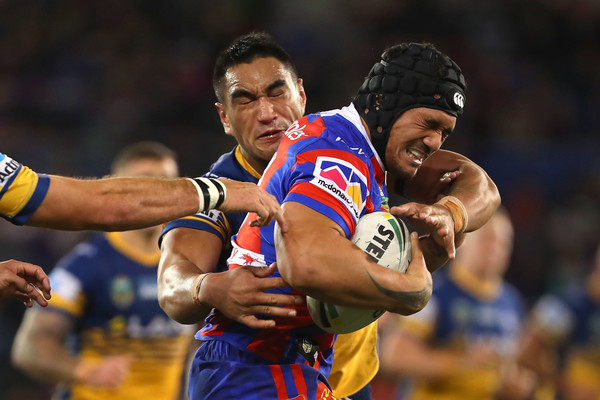 If Saifiti’s pass had been a little bit haphazard, then Meaney’s pass could have been pure chaos, sailing into a part of the field where there were no Newcastle players around to easily contain it. In one of the great moments of the night, however, Sione Mata’utia stormed forward and into the gap, arriving at the ball so belatedly that all he could provide with the quickest of catch-and-passes to send the Steeden out to Shaun Kenny-Dowall in the right corner. 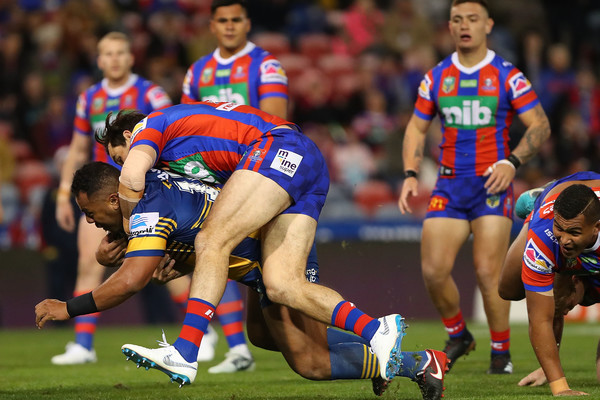 As it turned out, however, the scramble of this sequence of play ended up working in the Knights’ favour. Not only did the desperation force Mata’utia into one of the deftest catch-and-passes of the season, but the fact of him continuing Meaney’s play was so improbable that the Eels hadn’t caught up to the idea that SKD might be a real contender on the right edge, meaning that the big winger only had to reach up his hands and slide past George Jennings to put down four more points for the home team. 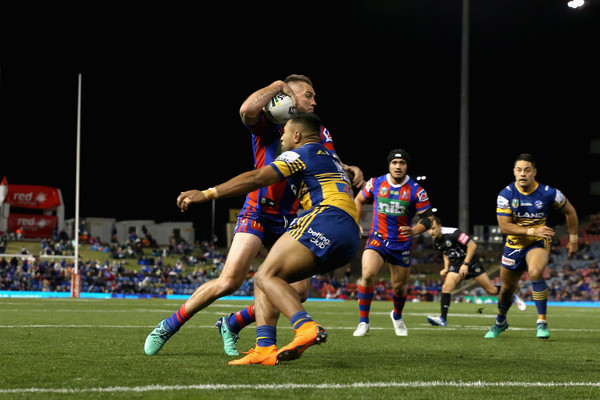 With Sio missing the conversion, the score was set at 10-10 when the siren rang out. However, the Knights continued to build on their momentum in the second stanza, starting with a superb kick bomb from Pearce. Once again, two chinks in the Parramatta armour set up Newcastle for points, as French found himself pushed over the sideline, and then Moses was pinged for a slow peel. Backing themselves, the Knights chose to tap and go, rather than kick for goal – a gesture of conviction that ended up winning them the game.

That calm conviction carried over into the next try as well. Not only were these the simplest four points that the Knights had scored all night, but they were also the first points that hadn’t been dependent upon luck in some way. All it took were a pair of pitch-perfect passes from Levi and Heighington for Pearce to put his body on the line and speed through Mannah and Moses to score directly beneath the posts. While Pearce had made his presence felt in the first half, the elegance and simplicity of this try finally made it feel as if he’d really returned, and with Sio booting through the goal, the Knights were now a converted try ahead.

As it turned out, however, this was their last try, since some more Hayne magic levelled the score a couple of sets later. This time, Hayne found the footy on the left side of the field, off a short ball from Jennings, before showcasing the single best sequence of footwork and dexterity in the entire match. Shifting the ball from hand to hand, Hayne kept on moving back inside and outside, getting around SKD, Watson (twice) and then Meaney, working the line before he found Norman at just the right moment. 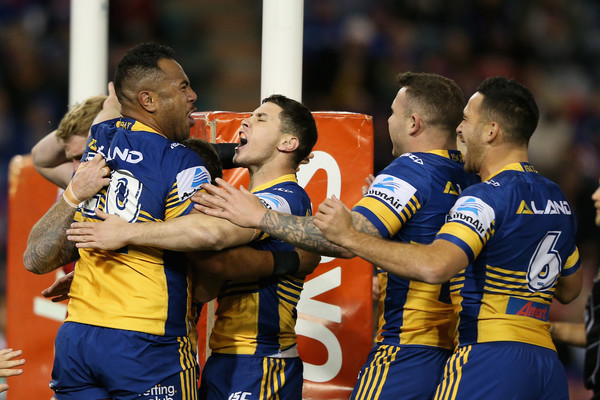 With such a brilliant platform laid by the ex-49er, Norman had more than enough space to make it to the line. While Norman read the play and timed his postion perfectly, this was one of those sequences where the try assist was more spectacular than the try – a glimpse of the Jarryd Hayne of the late 2000s, and the kind of player whose command of the football was so serene and effortless that his form left every other player on the park – even Mitchell Pearce – in the dust. 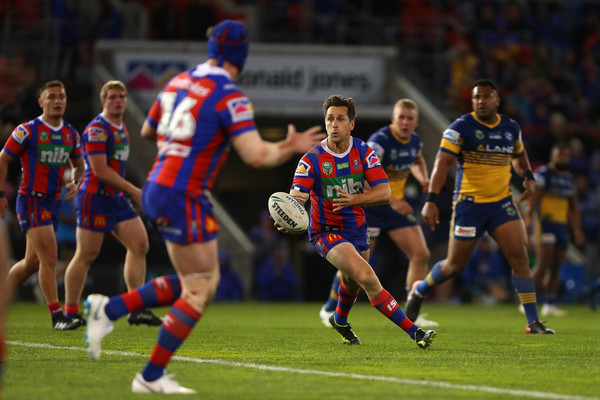 It was doubly disappointing, then, for the Eels, when Newcastle came away with a two-point win, thanks to a penalty kick from Sio on the back of a ball strip from Nathan Brown at the one hour mark. For the last twenty minutes, Parra tried and tried to come back, but Newcastle tightened their ranks for one of their hardest-won wins this year. The Eels will be looking for some closure – and more of the same from Hayne – when they take on the Bulldogs on Thursday at ANZ Stadium, while the Knights will be keen for a bigger win margin against the Titans on Saturday.