Penrith have had their fair share of depleted lineups during the 2018 season, but they were still sitting at fourth on the ladder when they took on the Sharks at Panthers Stadium for the first game of Round 18. This was their most depleted game of the season so far, since Maloney, Cleary and Peachey were all being rested after Origin, Mansour was still out with  his cheek injury, Edwards with his shoulder injury, McKendry with his knee injury and DWZ with his hamstring injury. 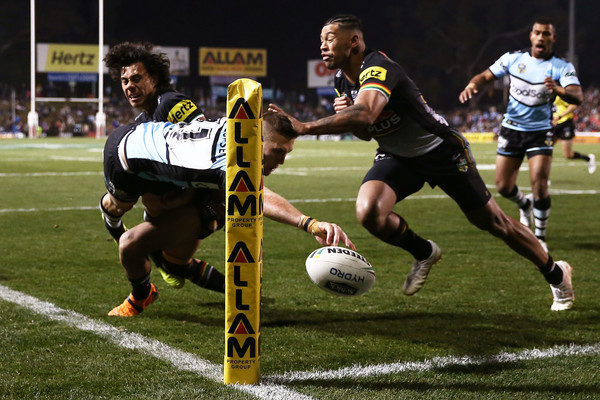 Matt Moylan also felt a bit like a missing Panther, since this was his first time returning to the foot of the mountains since making the switch to the Shire, leading to a fair share of boos from the crowd when he trotted out onto the park for the first time. Despite those odds, however, Penrith started well – or rather the Sharks started poorly, as an opening error from Moylan and penalty from Andrew Fifita paved the way for a damaging linebreak from James Tamou, who stormed up through the ruck six minutes in for one of his best runs of the 2018 season. 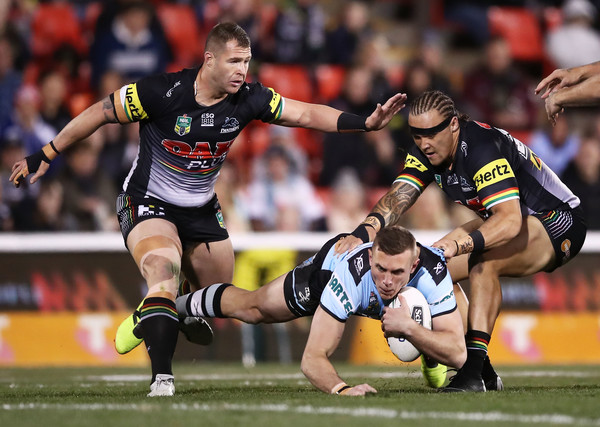 Ramming his way through the middle third of the field, Tamou felt like he was channeling Inglis, moving his massive frame with such ranging ease that it almost felt as if he was running in slow motion. The Sharks were caught by surprise by this opening surge from the Panthers, and at the back end of Tamou’s run, an offside penalty from Scott Sorensen on the right edge of the Cronulla defence gave the mountain men six again. With Paul Gallen not square at marker a couple of tackles later, Jarome Luai kicked through the first two points of the night. 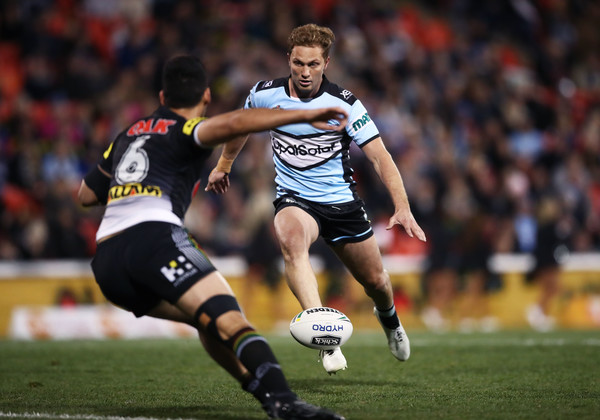 The Panthers got another good chance twelve minutes in following a one-on-one strip from Waqa Blake, but their momentum was quashed by a bad call from the referee, who deemed Sione Katoa (Penrith) to have knocked on despite interference in the play-the-ball from Cronulla. This was a turning-point, as a left foot kick from Moylan on the fourth tackle of the subsequent set got the Sharks their first dropout of the night. Three tackles into the next set, Wade Graham mistimed a try-assisting catch-and-pass to Edrick Lee, but it was still clear that Cronulla were consolidating. 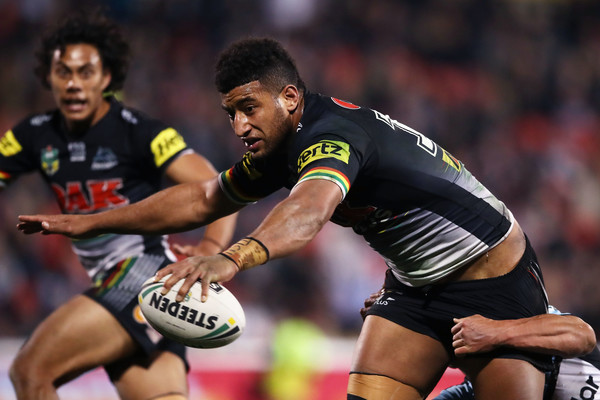 Penrith now briefly rallied, with Tamou building on his magnificent, Inglis-like run with a second linebreak, and a second surge up through the middle third of the field, only for a forward pass from Luai to put an end to tryscoring for the moment. The Panthers survived the next set – just – but the pressure got too much on the one after that. Four tackles in, the Graham-Lee combination worked, but Lee was held up half a metre out from the line by the best trysaving tackle of the night from Penrith. 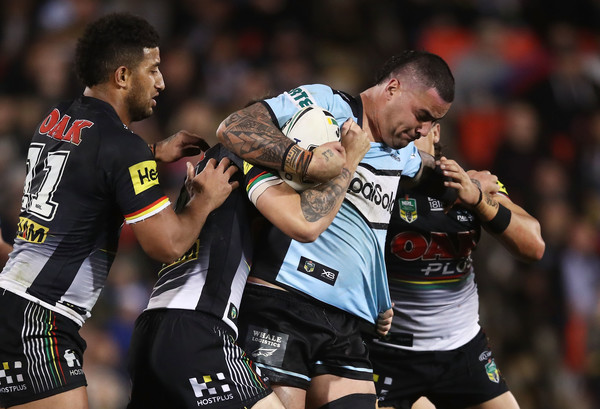 Undaunted, the Sharks shifted the ball rapidly across to the right edge, in a sublime sequence of play that started with a sweeping pass from Moylan. From there, Matt Prior ran into the line to straighten the play, before sending the Steeden across to Jayden Brailey, who popped it over to Valentine Holmes in turn. The Cronulla fullback now made the quickest of catch-and-passes to Sorensen, who offloaded just before hitting the ground to send Sione Katoa (Sharks) across untouched. 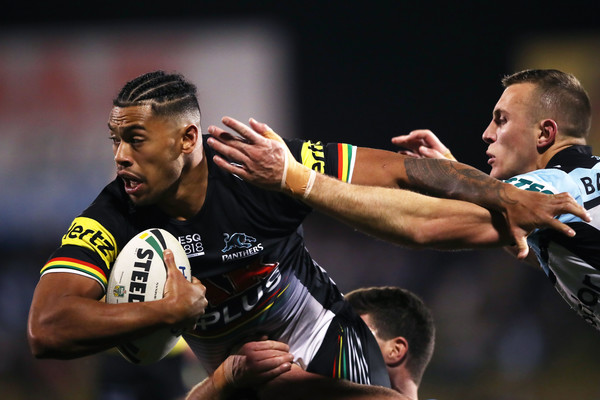 There was some controversy from the crowd about whether Holmes had lobbed the footy forward, but the speed of the catch-and-pass, combined with the tackle that ended it, made it difficult to tell for sure whether Holmes was within the law. The Sharks were now circling, as Tyrone May discovered a minute later, when he chipped the ball down the field but found Holmes stealing the chase, scooping up the footy and heading back down the field, almost breaking his way through the line. 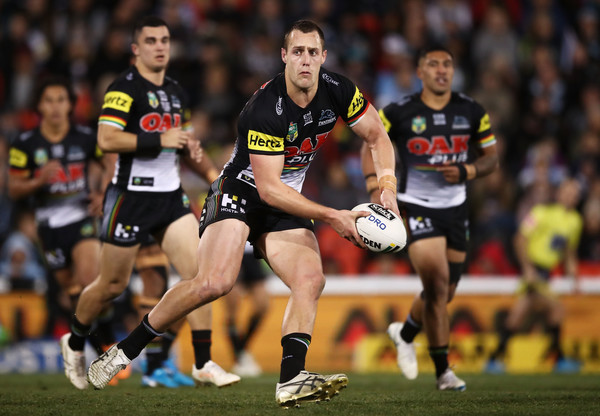 The game continued to work against the Panthers, as Blake was pinged for a dangerous tackle that was clearly accidental, and didn’t give his team any advantage in possession or field position. Penrith got through the set after that, but only just, with Sorensen and then Bukuya held up centimetres away from scoring. Eleven minutes out from the siren, Caleb Aekins lost the footy under a torpedo kick from Moylan. Full credit has to go to Chad Townsend too, whose kick chase put additional pressure on the back three, forcing the stand-in fullback to take the full brunt of Moylan’s boot. 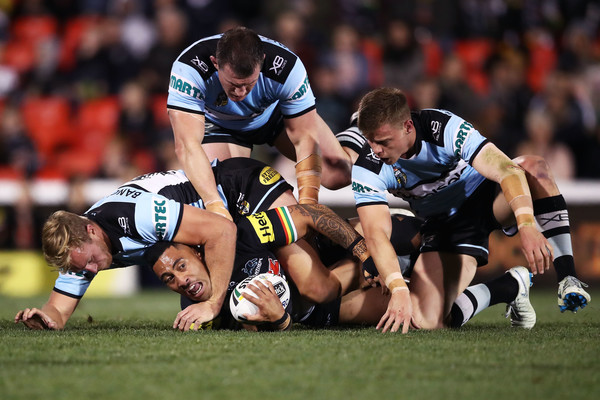 Finally, it seemed as if the Sharks had worn the Panthers down, and forced them to concede that they were operating without so many of their key playmakers. However, in one of the sudden changes in fortune that can make rugby league so exciting, Penrith got the footy back on the first tackle and made their way back down the field, where a grubber from Viliame Kikau forced Holmes to boot the ball into touch, getting the mountain men their first dropout of the night. 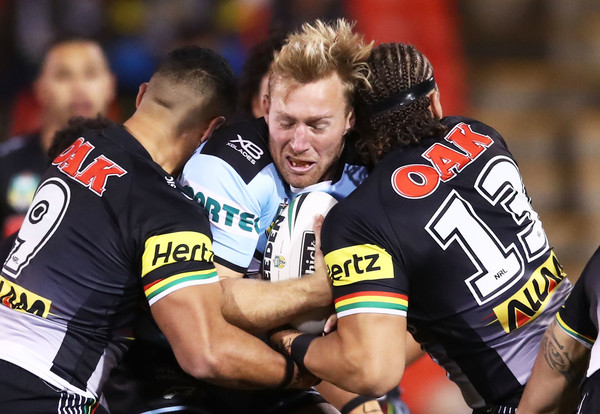 It all came to nothing, though, since it was now Penrith’s turn to hand over the Steeden on play one, thanks to an error from Moses Leota on the thirty metre line. The Panthers had had their chance, and missed it, and at the other end of the field Moylan sent a cut-out pass to Graham, who popped the ball back inside to Holmes, who hit the ground and somersaulted over to score the next four points for the Sharks. It was a dazzling display of dexterity, and more than enough to sustain Cronulla as the final six points wound down without the scoreboard changing. 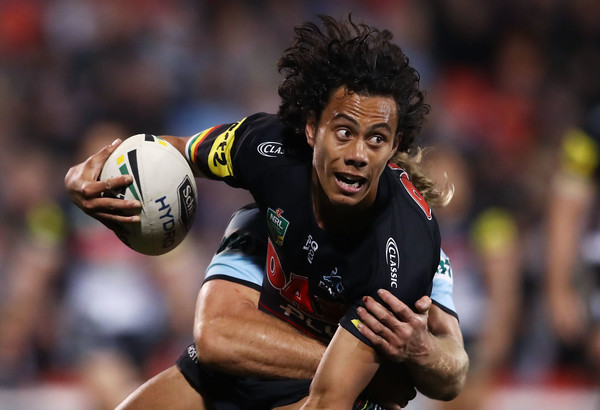 Two tries were scored in the next quarter – one from Penrith, one from Cronulla – but in combination they spoke to the ease with which the Sharks had managed to regain the narrative whenever the mountain men seemed in danger of claiming it. After the best tryscoring opportunity for Cronulla in the first ten minutes culminated with an error from Kurt Capewell, the Panthers executed a superb sequence over to their left edge, sending the ball through Luai and May for Blake to score in the corner. 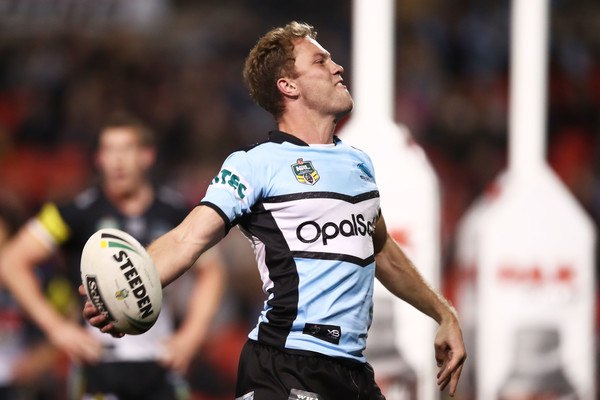 The highlight of this sequence was Luai’s footwork, which allowed him to get around Townsend before shifting the football back in front of the Cronulla halfback to Blake. The rest of the away team were disheveled and disorganized by that spectacle, and yet the Sharks got their own back six minutes later, when they more or less repeated their last try. Once again, they combined a mid-range outside ball with a shorter inside ball, but this time it was Townsend who started the play, sending the footy out to Sorensen, who popped it back in for Moylan to skip over Luai and then slam through Akins at speed to notch up four more points. 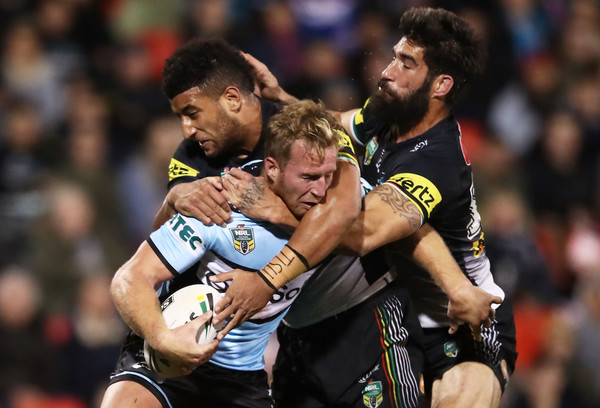 You couldn’t think of a better way for the Sharks to self-correct than by simply repeating the formula of their previous try. Yet the fact that these four points were bookended by Townsend and Moylan gave it a special quality as well, since Townsend had been the casualty of Blake’s previous four points, and Moylan was persona non grata with the Penrith crowd, who were painfully reminded of his skill and strength when he sailed over for these four points. For that reason, this was the first point when the Sharks decisively felt as if they’d won the game, especially once Townsend booted through his third conversion to bring the scoreline to 6-18. 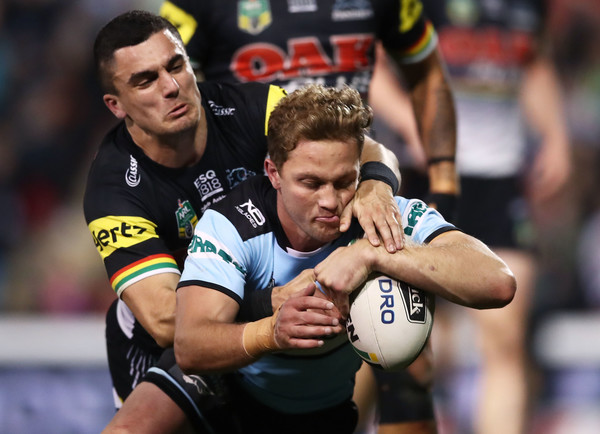 Yet something shifted about fifteen minutes out from the end, as the Panthers started to find a second wind. Whether it was Moylan running straight into the referee, or the awareness that Penrith have been the best second half team in 2018, the mountain men gathered their ranks and started some of their most focused sets of football all night. That all crystallised when Christian Crichton prevented Lee grounding a Holmes grubber, gaining his side a much-needed dropout. 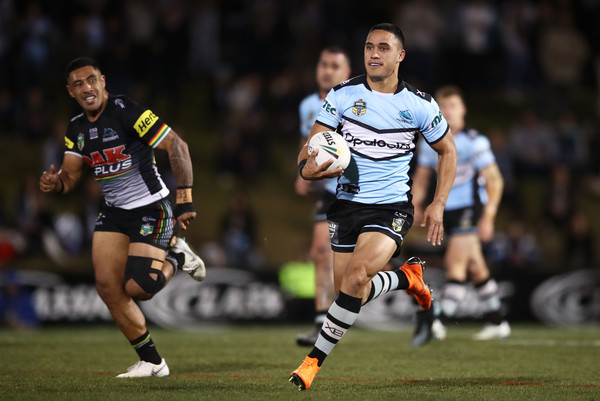 It was bizarre that Tamou had only just been brought back onto the field at thos point, given his massive performance in the first stanza, but his presence had an immediate impact, as he took the first tackle after Holmes chose to go short on the dropout, Warriors-style. Corey Harawira-Naera took the tackle on the second, and then steamrolled through Matt Moylan on the third, as if to show the Cronulla side that Moylan’s sublime try wasn’t going to be the last word on the game. 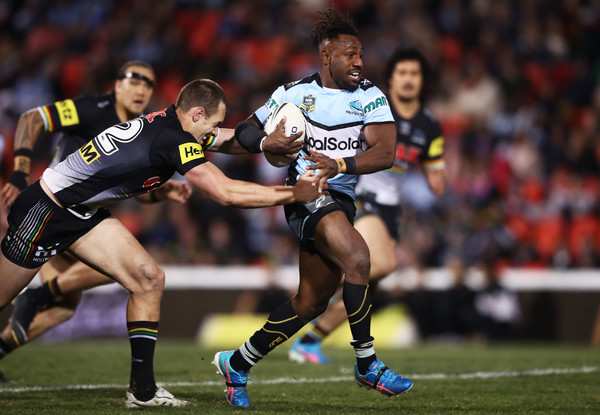 For a moment, it seemed as if we might be set for another barnstorming Penrith finish, as some more brilliant footwork from Luai sent Crichton across on the Panthers’ right edge a set later, only for the young winger to lose the footy under some well-placed pressure from Lee. If they’d scored, the mountain men might have taken the game to golden point, but this would turn out to be their last major tryscoring opportunity, and the Sharks cemented their win with a final try from Townsend, off a sublime linebreak from Moylan, three minutes out from the end of the game. 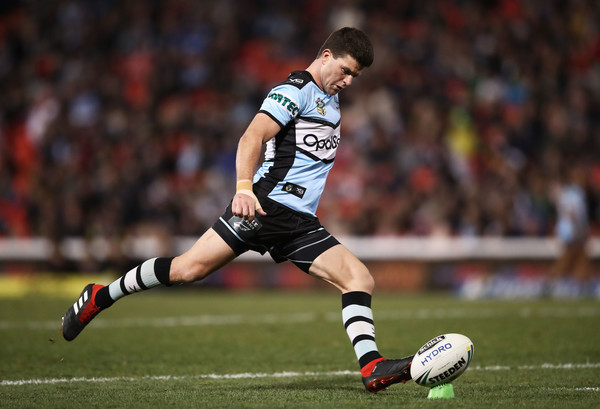 The match thus offered all the drama you’d hope for from Moylan’s first fixture back at Panthers Stadium, even if so many of the key Penrith playmakers were absent. With Peachey, Cleary and Maloney back next week, the Panthers are going to be keen to make up for this loss with a muscular performance against the Broncos at Suncorp, and should feel pretty motivated by almost winning here with such a depleted outfit on the field. Meanwhile, the Sharks will be hoping to cruise over the Raiders in Cronulla on Friday night for the second time in the 2018 NRL season.