The Cowboys were playing out of their element in Canberra on Saturday night, with temperatures dropping below zero and even the home team shivering in their jackets on the sidelines. The game started with a bang for the Raiders, with Jordan Rapana almost scoring on the left edge a couple of minutes in, only to scoot around to the other side of the park and collect a crossfield kick from Sam Williams a couple of tackles later.

Despite Antonio Winterstein wrapping his arms around Rapana’s right leg as he caught the football in mid-air, the Canberra winger managed to pivot away from his North Queensland counterpart to slam the ball to ground, in a novel variation on the gymnastic dexterity he typically displays on the try line. It would be the start of a barnstorming game for Rapana, whose agility returned intact after a couple of weeks of hamstring problems, and whose ability to pull off such a contorted play without injury spoke to his strength and stamina at this particular moment.

While Jarrod Croker’s conversion might have bounced off the left post, the Cowboys now suffered a series of errors that paved the way for the next Canberra try. First, Enari Tuala showed his inexperience, misreading a cut-out pass from Te Maire Martin that ended up bouncing off his chest. Then, Lachlan Coote sent the football out on the full while aiming to get his team a scrum and a short reprieve. By the ten minute mark, the Raiders had completed every set, while the Cowboys had only completed one set.

The next Canberra try was also preceded by some brilliance on the left edge from Rapana, who broke through the line, was tackled, but then had a second go at scoring. By this stage, Rapana was really rolling, demanding the full force of the North Queensland defence to hold him up – and even then, they weren’t able to stop him standing, but had to deflect him to the ground right in front of the chalk and then pile on top. Two tackles later, Michael Oldfield scored in the same spot, off a try assist from Croker, who had almost been taken off the park due to a leg injury shortly earlier.

A slight lull now ensued for the Raiders, with Aiden Sezer – who had taken over kicking duties from Croker – failing the second conversion, and Dunamis Lui making the first Canberra error of the night. It was followed by a offside penalty for Joey Leilua, and while the Raiders were able to auto-correct – Nick Cotric helped to force a handling error from Granville right on the line moments later – the Raiders had showed the Cowboys a chink in their armour, giving them the confidence for their first tryscoring sequence.

Unlike the two Canberra tries, which had been masterpieces of vision from key playmakers, the first North Queensland try was a gesture of organisation and consolidation – just what they needed to get back in the game. The play started with Granville, and then moved through an offload from John Asiata, an outside ball from Jonathan Thurston to Te Maire Martin, and then finally an inside pass from Martin back to Coote, who put down the first four points for his side, crowning a particularly focused period of play for the North Queensland spine. Despite the total Canberra dominance over the first quarter of the night, it was now only a two point game, as Thurston slotted through the easiest conversion of the match so far, in what was probably the high point of the night for North Queensland.

The highest point – literally – came soon after with a contest between Kyle Feldt and Jarrod Croker in the air. Not only did Feldt beat Croker as decisively as Rapana had beat Winterstein twenty-five minutes before, but Croker was penalised for what was ultimately an inadvertent tangle of bodies under the high ball. Yet the Cows didn’t make the most of their good luck, with some poor timing, and some over-confidence from Feldt, paving the way for one of the most remarkable tries of the Canberra season.

It started at the tail end of a Canberra kick, as Feldt found himself in a one-on-one standoff with the Steeden about two metres out from the dead ball line. By all accounts, it seemed as Feldt could safely shepherd the footy into touch, and so avoid his team a dropout, but he’d counted without the conviction and passion of Blake Austin. Storming up behind Feldt, the Canberra icon reached a hand around and managed to ground the football in the infinitestimal gap of space between Feldt’s boot and the try line. 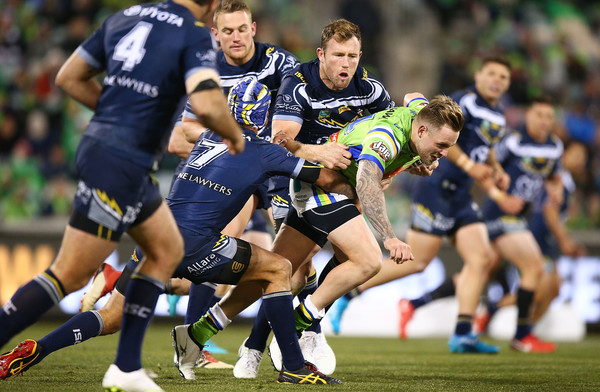 It took the Bunker a while to make the decision, especially since the on field ruling had been no try, but after a few rewinds it was clear that the footy had found grass, and that Austin had pulled off the stealth play of the night. Nevertheless, some miscommunication between Rapana and Whitehead under the high ball saw the Cowboys get the scrum feed, and then another shot at the line, just when the Raiders should have been consolidating with a repeat set as half time loomed.

The first couple of tackles were a bit lackluster, with Martin actually slipping to the ground, on the right edge, on the third tackle. Yet that just made Thurston and Cooper’s linkup seem even more elegant, as JT sent through a skittering grubber just to the left of the posts, and Cooper collected the footy about a metre out from the chalk, before bundling up and rolling low through Croker and Leilua to score the last try of the first stanza. 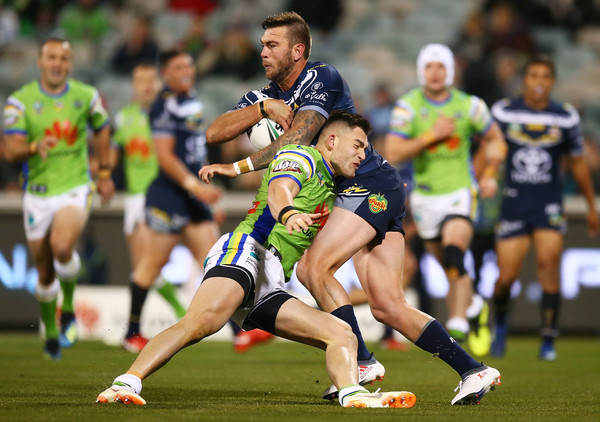 This would also be the last try of the game for the Cowboys, who wouldn’t score once in the next forty minutes. Still, with Thurston booting through the extras, this was a worrying end to the first half for the Raiders, since despite their barnstorming opening it was once again a two-point game. By the time the first twenty minutes of the second stanza had passed without points, their opening pair of tries was starting to feel like a blip on an otherwise evenly-scored game, putting considerable pressure on them to decisively stamp these next forty minutes as their own.

The first twenty minutes were by no means uneventful, since this was probably the most closely contested period of the game. Whether it was a sloppy play-the-ball from Jensen to Thurston, or Linnett blocking Rapana at the back end of a great crossfield kick from Croker, or even back-to-back forward passes from Hodgson that went uncalled, both teams seemed to alternate been desperation and exhaustion as the minutes wound down. The closest tryscoring opportunity came from Josh Papalii, who twist-and-spun over the line after Hodgson’s two forward balls, and was pulled back so close to the turf that he could probably have reached out a hand to get the Steeden down.

With fifteen minutes to go, and in a two point game, nobody could have predicted that the Raiders would now proceed to almost triple their score, making for their most prolific period of the 2018 season – so prolific that it suddenly seemed possible that they might make their way to finals footy after all, since a finals berth was no less likely than this massive resurgence of points late in the second half.

The tipping-point was a penalty for Canberra after Cotric wasn’t permitted to properly play the ball. At the other end of the park, Williams sent through his best grubber of the night, looking on as the bounce utterly defied Coote, who popped it so neatly in Oldfield’s direction that he ended up making one of the best try assists of the game for the Canberra side. This time, the bounce was perfect, allowing Oldfield to slam down a double as effortlessly as if Williams had booted the footy straight to him.

With Sezer sending a beautiful bending ball through the posts from a difficult sideline angle, the Raiders were back to the form of the first part of the match, and finally perfoming proportionately to their massive advantage in field position and possession over the course of the evening. A couple of sets later, Oldfield made it a hat trick, collecting the footy out of the scrum and shrugging off Taumalolo and Bolton to run the full length of the field, setting Sezer up for his easiest conversion so far.

A couple of sets later, another brilliant crossfield kick reignited the opening contest between the two number fives, but this time on the ground. Lunging in towards the football on the Raiders’ right edge, Winterstein tried desperately to ground it, but instead found the slippery Steeden passing straight through his hands – he barely got a touch to it – before Rapana stormed up from behind to score his second try of the evening, with Sezer once again adding the extras to put the green machine twenty points ahead. 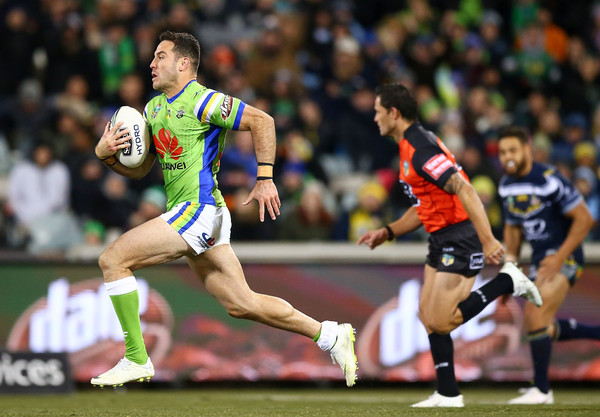 It would have been a resounding enough victory for the game to end here, bookended by Rapana tries, but the Raiders still had four more points in their arsenal. Two minutes out from the siren, after both Cooper and Winterstein had tried to crash over at the other end of the park, Sezer broke through the line off the back of an inside ball – the perfect end to a game where Sezer had done so much to structure the team, and to supplement the string of tries over the last fifteen minutes.

As Sezer booted through his own conversion, nobody in the audience could doubt that this was the game that the Raiders have been waiting for all year, partly because it was a game that played like their year in miniature – periods of watching and waiting, despite clear and obvious strengths, alongside periods of barnstorming brilliance. They’ll need that belief to get them through away matches against the Sharks, Storm and Panthers in the countdown to finals footy, especially since they’re now three wins behind the Warriors, while the Cowboys will be looking to compensate against the Dragons when they return to tropical conditions next Saturday night.