Both Canterbury and South Sydney had a good run in Round 16, with the Bulldogs beating the Knights pretty decisively in Newcastle and the Bunnies coming away with a one point win thriller over North Queensland. While the Dogs had lost by four to the Raiders the week before, the Rabbitohs had enjoyed a bye during Origin week, making them seem that little bit more refreshed when they trotted out on the park. The first big event of the game was a linebreak from Angus Crichton on the right edge, but the ex-rugby player sent the ball over a bit too early to Alex Johnston, who fumbled it instead of scoring then and there. 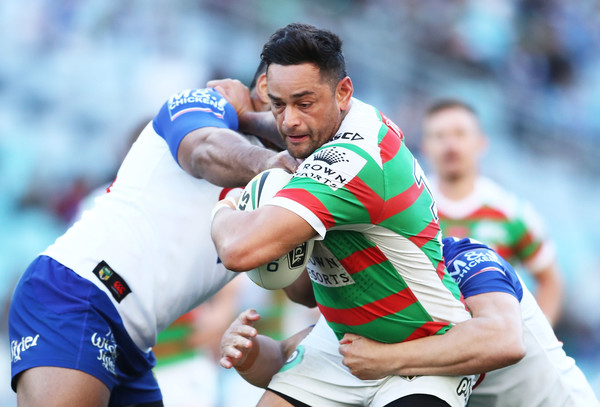 This aborted try gave way to a sustained sequence of errors and penalties, as each side failed to execute a convincing tryscoring formation. It was a particularly bad period for Canterbury, whose game often seemed to be coming apart before it had even begun. On the first tackle after Johnston’s error, two offloads led to the Bulldogs being driven back further towards their line, while David Klemmer was almost dragged over the sideline a tackle later, and lost the football in the process. Midway through the next set, Sam Burgess lost the Steeden directly into Adam Elliott, but the Tathra export didn’t manage to gather it, and allowed Burgess to reclaim it immediately, gifting the Bunnies another set in the process. 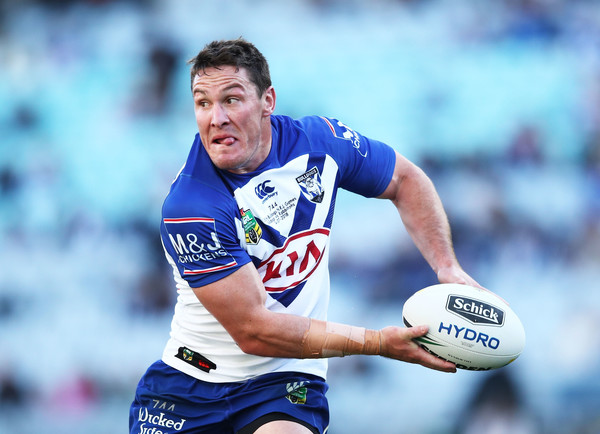 South Sydney weren’t perfect either, since this next set came to nothing when Hymel Hunt – standing in for Greg Inglis – made a mistake. As the errors accumulated for both sides, it became clear that each team needed the other team to make a really decisive or striking mistake to regain their competitive advantage. For a moment, the Dogs seemed to have received this opportunity when Adam Reynolds booted the ball directly into the back of Rhyse Martin, and Cody Walker fumbled while scrambling to recover it. 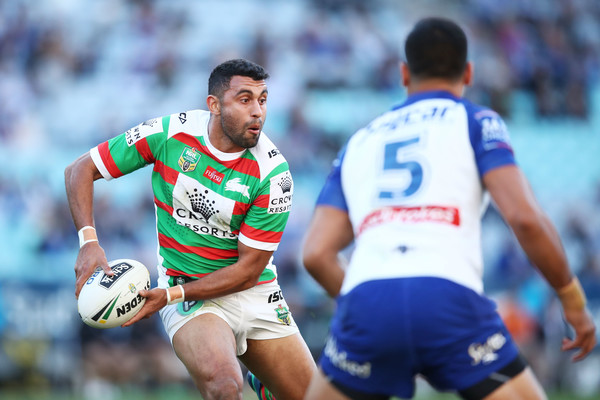 Yet the Dogs were unable to consolidate here, with Will Hopoate being held up for the second time, on the fourth tackle, after having almost crossed over a set before on the back of a Jeremy Marshall-King kick, only to be kept at bay by a heroic trysaving tackle from Hunt. It was to be the first of many near-tries over the course of the night, and at the end of this very set Walker made up for his fumble with a  similar tackle on Kerrod Holland, holding the Bulldogs backliner up above the chalk, and bringing an end to the first period of genuine pressure that Canterbury had been able to exert on South Sydney so far. 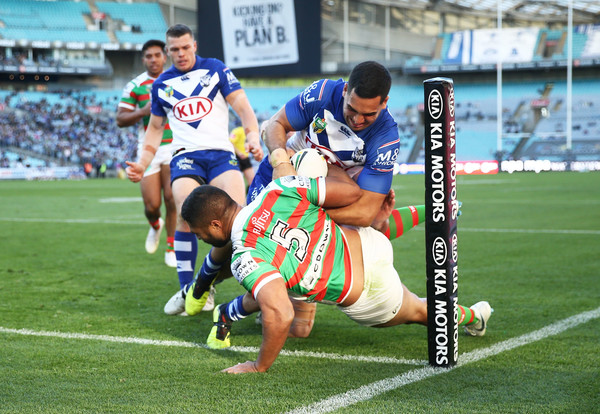 At the end of the next set, Hunt caught Lewis’ high ball in the air, but Walker was penalised for a fairly minor escort, allowing Martin to slot through the first two points of the game. The Bunnies got their next big chance when Damien Cook broke through the line on the fourth tackle, reaching the five metre mark, and setting up the best tryscoring opportunity for South Sydney since Crichton’s opening run. With Lewis penalised for being square at marker, the hosts got even more of a chance, but the wiry halfback made up for his error with a truly heroic trysaver on Sam Burgess a couple of tackles later. 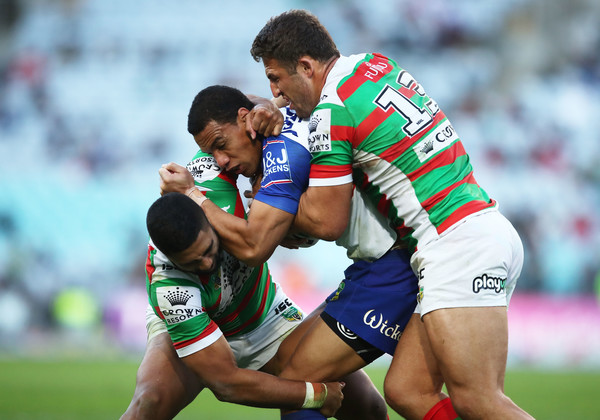 Lewis’ effort steeled the Bulldogs for the next defensive sequence, allowing them to hold up both Robert Jennings and Campbell Graham in turn. At the end of the set, Reimis Smith collected a kick bomb from Reynolds and just made it back into the field of play, ending one of the most dangerous South Sydney sets in some time. Yet Reynolds’ boot delivered fourteen minutes out, thanks to a spectacular torpedo bomb that had three or four really dangerous bounces to it, and almost defied Josh Morris from scooping it up before the cardinal and myrtle kick chase arrived. 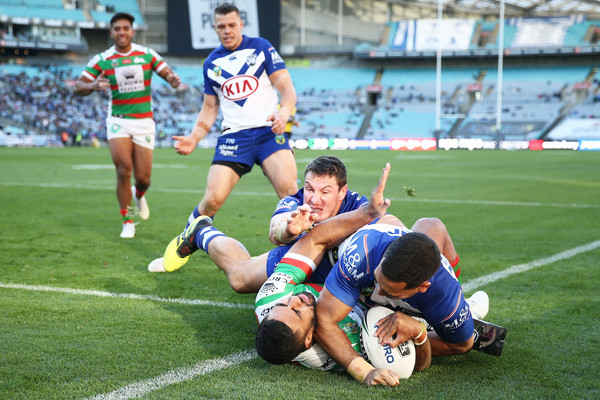 While Morris did manage to contain the football, he wasn’t totally secure, and so a big tackle from Campbell Graham and Dane Gagai managed to dislodge it. Finally, the Rabbitohs were rolling, and the next set played more like a training run than a genuine contest, with a series of deft passes out the left edge sending Jennings over in the corner before the Dogs even had a chance to organise their defence. No team in the NRL scores more tries out of scrum plays, and you could see why that’s the case here, since the Bunnies moved so deeply into the line, and so rapidly out of the scrum, that they felt as if they were moving by rote, and could have been executing this sequence blindfold. 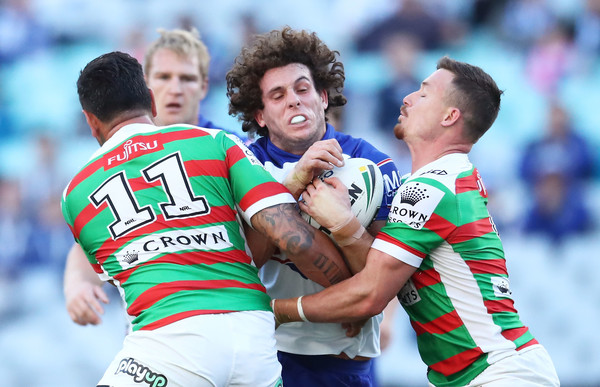 A sweeping sideline conversion from Reynolds sealed the deal, but this was the mere prelude to one of the Bunnies’ best passages of ball movement in weeks. It started off with a trademark run from Cook, who was brought down by a low tackle at speed from Lewis, but not without spinning around and offloading to Walker, who popped the footy across to to Reynolds in turn. The South Sydney halfback now made one of his best runs of the year. His best acceleration over the last ten metres was fantastic to watch – like seeing the energy of the whole Bunnies outfit lift after a fairly staggered opening. 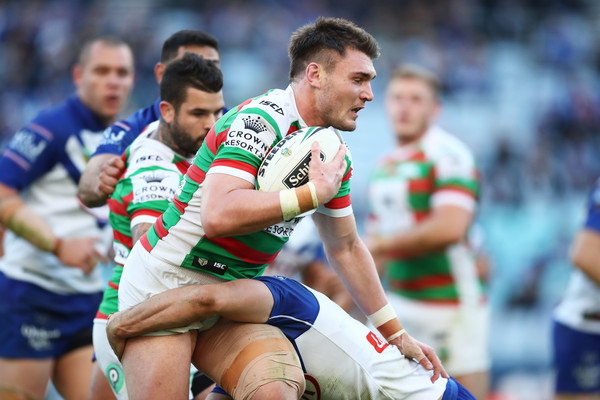 Once again, Reynolds booted through the conversion, while a series of big trysaving efforts from South Sydney – most spectacularly Cook on Martin – prevented the Bulldogs making any more headway over the opening stanza. Eight minutes into the second half, Reynolds got his first penalty shot after Holland was pinged for not being square at marker, before sending through yet another visionary kick to bring the Bunnies to three points, and an 18-2 scoreline once he had added the extras. 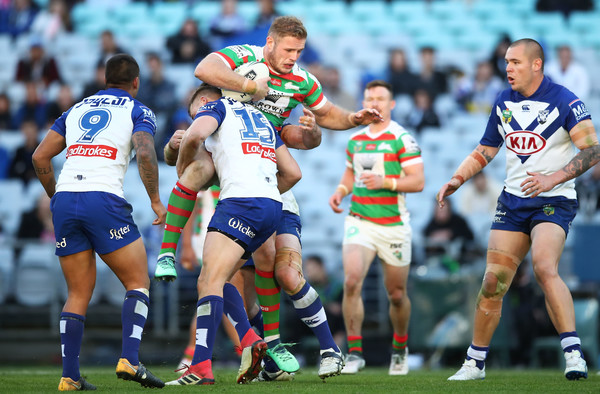 This kick couldn’t be more different from his earlier torpedo effort, but was equally brilliant – a perfectly weighted boot on the last tackle that predicted exactly where Jennings would find it, and so set up his no. 5 for a rousing double. While technically a grubber, it was much more buoyant and leisurely than a typical grubber, seeming to slow the game down as Jennings reached the corner an age before Holland, Smith and Hopoate converged on him. Usually, Lewis is the halfback who manages to slow time before kicks – he’d actually stopped short before some of his last tackle options in the first half – but Reynolds showed that he could bend time around the boot just as well here, continuing a passage of exemplary leadership from the halves. 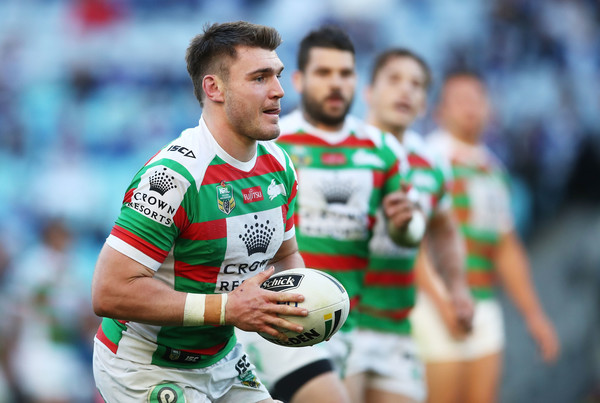 Fortunately for the home team, the Dogs got one moment of real brilliance to match the scintillating displays put on by South Sydney over the last thirty minutes of football. An error from Johnston and a slow peel from Cameron Murray finally set Hopoate up for the try assist he’d been raring for all evening. Scooting into the corner at the tail end of a series of superb Canterbury passes, Hoppa actually held the footy directly in front of him for a full second to draw in Walker, before sending across a basketball pass to Smith. So perfectly timed was the pass that the Bulldogs’ no. 5 didn’t even have to move, but just knelt to the ground to claim the four points. 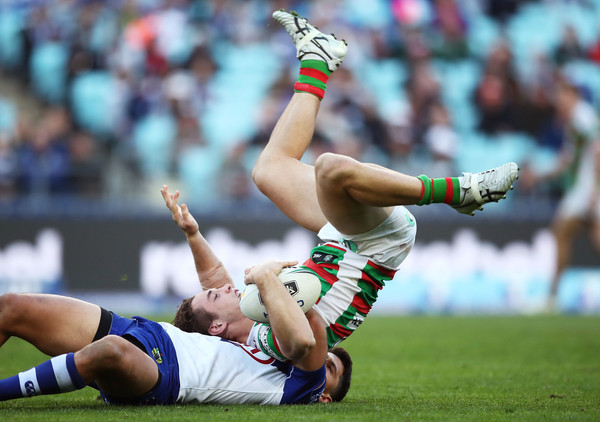 It was the second try for Smith in his first four games of NRL, and while Martin might have missed his first kick of the year – it was a difficult angle and a slight wind had started to blow – the Dogs really got rolling over the next five minutes, enjoying a good period of possession that ended with two successive penalties from the Rabbits. The first came from John Sutton for a dangerous tackle, and the second from Dane Gagai for crowding, but a handling error from Holland and incorrect play-the-ball from Josh Morris meant that Canterbury were never able to capitalise. 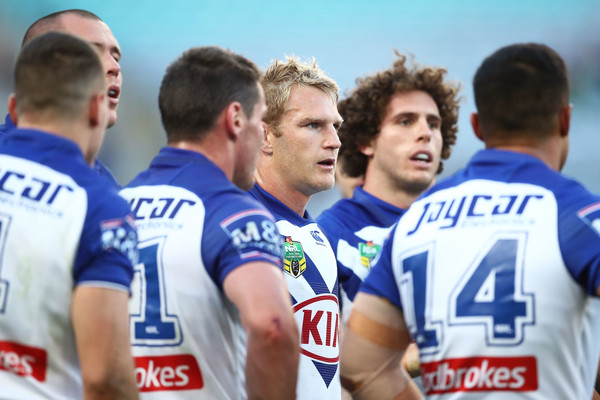 The next big chance for the Bulldogs came a couple of sets later, when JMK tried to score right on the line, only for Sam Burgess to reach out from the very back of an accumulating tackle with a massive left arm effort to knock the ball from the Canterbury hooker’s grasp. From there, a complex sequence ensued, in which Aiden Tolman regathered the ball, only to slightly knock it onto Walker before making contact with Nu Brown as well. If Hoppa’s try assist had encapsulated all the Canterbury potential, then this passage of play captured everything preventing Canterbury achieving their potential – a burst of promising energy that ended in chaos. 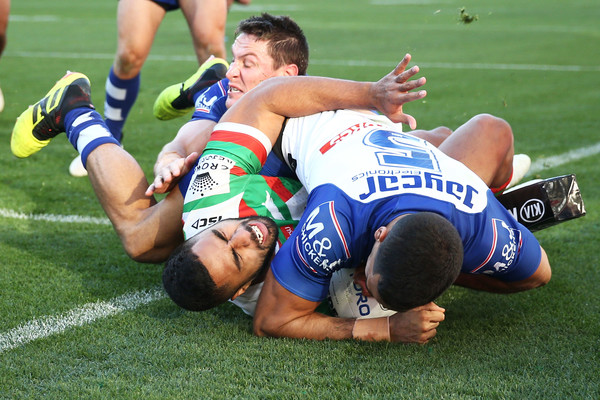 Marshall-King wasn’t done yet, however, almost breaking through the line and then offloading to Smith on the left edge of the field. The stage was set for a barnstorming run up the sideline from the young winger, but he didn’t quite make the catch, returning the advantage to the Bunnies once again, who now proceeded to consolidate following their momentary lull in the wake of Smith’s try. It started with a hospital pass from Sutton to Reynolds, who only just gathered the footy before slaming into Lewis. The ball then moved through Cook, Reynolds, Johnston and Walker before the Bunnies started to shift it back to the inside again. 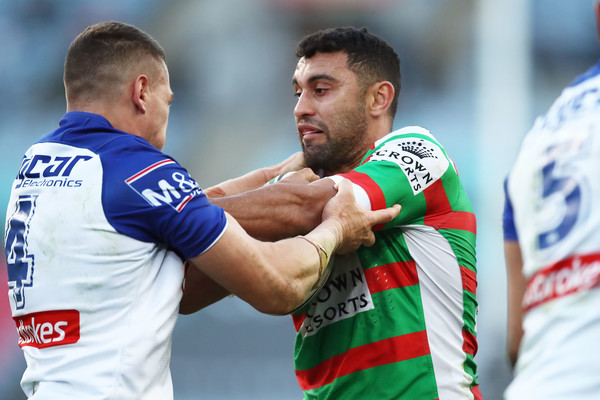 A couple of tackles later, Souths retried the movement up the left edge, and this time it worked, as Walker sent the footy across for Jennings to put down a hat trick and his sixteenth try this year, making him the top try scoring player at this point in 2018. While Smith almost got there in time, his attempted tackle ended up being an advantage for Jennings, who tumbled over the big winger’s body and was kept up in the air as his opponent skidded along the grass beneath him. 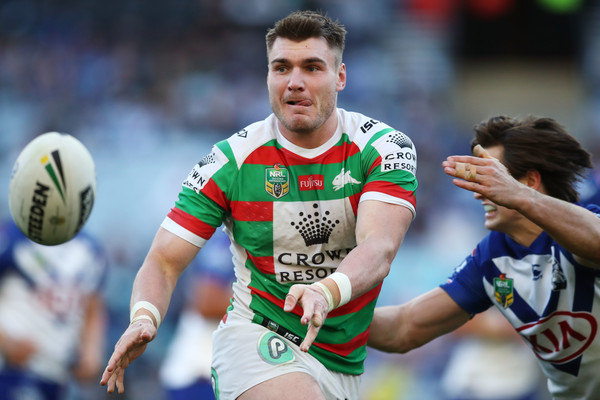 It was a dazzling conclusion for the away team, and for Jennings in particular. They’ll be looking for an equally barnstorming performance, then, when they take on the Tigers at ANZ Stadium next Saturday night, once again as the visiting team. Meanwhile, the match exposed some real chinks in the Canterbury-Bankstown armour – chinks that the Berries will be looking to plug when they meet the Eels for the Battle of the West at ANZ on Thursday night.