Only four points separated Cronulla and Canberra at Shark Park on Friday night – the perfect conclusion to a nail-biting game in which both teams made a pretty compelling argument for coming away with the win. The Sharks had a strong opening, choosing to tap after a strip from Josh Papalii, but didn’t manage to score on the following set, after a loose carry from Scott Sorensen a couple of tackles in let the Raiders off the hook.

That frustration was eclipsed by a disastrous sequence for Canberra on the next set, where a floating bomb from Wade Graham utterly defied Brad Abbey, who made not one but two attempts to contain it – first in the air, then on the ground – before Valentine Holmes regained possession at the end of a daring kick chase. A moment later, Jordan Rapana was sent to the bin for a professional foul, and yet Cronulla now stuffed up another opportunity, with Jayden Brailey kicking too hard on the last play.

At the other end of the park, the Raiders came alarmingly close to a dropout, with Holmes only just carrying the footy back into the field of play under considerable pressure from the visiting team. It was a worrying sign, given the number of teams who’ve benefited from being a man down over the last few weeks, but fortunately for the Sharks, the Raiders weren’t able to consolidate on their luck either, as Sam Williams kicked so directly to Edrick Lee at the end of the next set that you could have been forgiven for thinking the big winger was still in Canberra colours.

From there, the Sharks nosed around the left edge of the field for a bit – their preferred area so far – before Andrew Fifita got them on the board with a mammoth one-man effort. Fending Josh Hodgson as if he wasn’t even there, Fifita was actually held stationary by Dunamis Lui and Josh Papalii, before accelerating through them once again to score beneath the posts. Recalling his famous grand final try in both its strength and improbability, these were Fifita’s first four points this season, and you could see the relief and ecstasy written on his face. 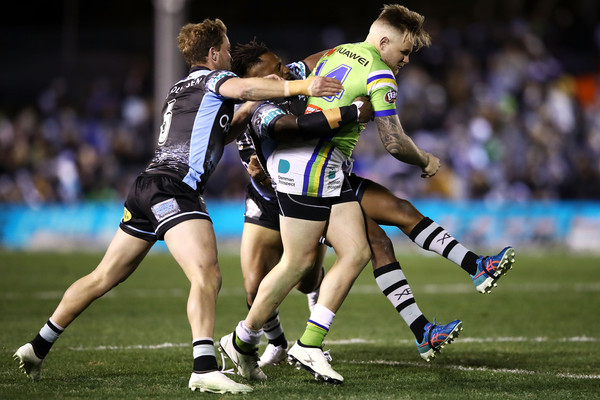 Inspired by Fifita, the Sharks now shifted their attention to the middle of the field, pummelling the Canberra ruck so mercilessly that they started to feel a bit myopic, especially when Sorensen charged down the middle in total oblivion to Sione Katoa unmarked on his right side. Crucially, this heightened aggression didn’t prevent them taking their two after a crowding penalty from Blake Austin, but as luck would have it, the heavy wind meant that Chad Townsend’s boot didn’t deliver, bouncing the ball off the uprights.

A sense of frustration was starting to creep over the Sharks, since while they might have started strong, neither tapping nor taking the two had ended up working for them. They needed to score, and score again soon, especially with Rapana back on the field. A couple of sets later, three superb passes sent Ricky Leutele over on the left edge, all of which were built on the back of some good organisation from Townsend and Matt Moylan in the centre of the field. 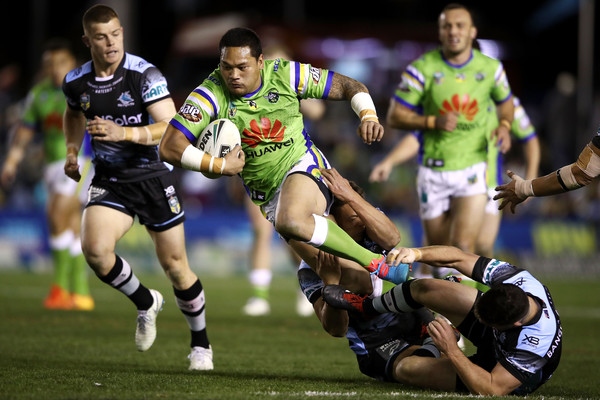 The first pass came from Graham, who caught the footy under pressure, bobbled it, and still somehow managed to sent it across to Holmes. The second came from the Cronulla fullback, who caught-and-passed with the kind of preternatural speed that has led to him seeking out the NFL as a career option in 2019. The third came from Lee, who put in a massive right-arm fend on Rapana while remaining right on the sideline, before offloading across to Leutele to score.

Full credit has to go to Leutele as well, not just for the putdown, but for recognizing that if he’d received the footy from Holmes – as initially looked possible – he would have stood in danger of knocking it on. Stepping back into the limelight, he was rewarded for his sacrifice a few seconds later, when Lee sent the football on to him in turn, for the second try of the night for Cronulla-Sutherland.

The Sharks had been restless on this left edge all game, while the Raiders had been just as restless to clean them up on this left edge, meaning that these four points – six, once Townsend added the extras – needed a particularly emphatic response from the visitors. They delivered a a few sets later, when Rapana muscled his way up to the line and offloaded the football out to Leilua, who flipped it back inside to Abbey to cross over, untouched, for the Raiders’ first four points.

Canberra couldn’t have scripted a better try to get them back in the game. Not only did it revive the Lepana magic, but it gave Rapana the opportunity to make up for his time off the field, since he effectively orchestrated the play. Moreover, it provided Abbey with some much-needed catharsis after his double fumble earlier in the match, which had been all the more painful given the way he’d been shown up, positionally, by Holmes in the fullback jersey.

The Raiders’ relief didn’t last long, however, since Holmes was the next to score, accelerating the Sharks’ attack with a great kick five minutes out from the end and then crossing over on the next tackle. Brilliant players make their tries look easy, and so it was here, as Holmes collected the footy on the right edge and dummied once before scooting around Aidan Sezer to slam down his fifteenth try of the year so far.

Cronulla weren’t done yet, though, as a forward pass from Abbey to Rapana got them one last chance before the siren rang out. In a kind of compressed version of their earlier string of passes, Townsend sent the footy over to Graham, who flicked it out the back for Lee to collect it. On the next tackle, Graham regained possession, before slamming through Abbey, Rapana, Leilua and Whitehead right on the line.

So strong was the Canberra pack defence that it seemed that the replay would at least suggest some ambiguity to Graham’s putdown, so it was astonishing to see how cleanly and confidently he reached a hand out from the tackle, suspended it in the air, and then planted it to ground, retaining control of the football long after he’d scored, and long after the tackle had reached its moment of maximum contact.

It was a vision of assured ball security, making it doubly dispiriting for the home crowd when Graham didn’t return from the sheds, having apparently sustained a groin injury that he was wary of exacerbating over the second stanza. Meanwhile, a poor pass from James Segeyaro to Aaron Woods meant that the Sharkies started the back half much as the Raiders had started the first half, setting up Austin for a quick tap-and-go that saw him slam over the line, drawing in half the Cronulla defence. 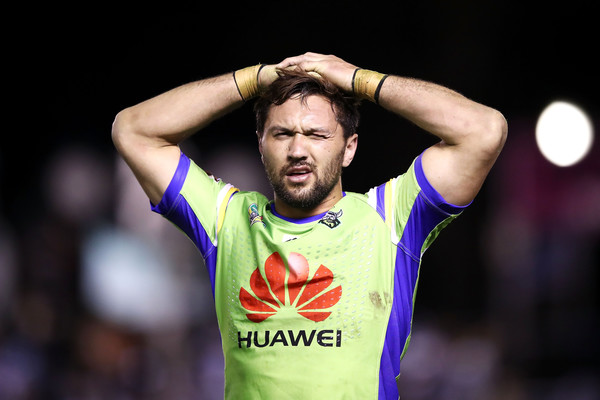 As it turned out, Austin had a backup plan, popping the footy backwards to Leilua, who ran up through the vacuum that had opened up behind Austin as Cronulla had rushed in to defend him, for what was probably the easiest Canberra try of the night. It all happened so quickly that the Sharks were forced onto the back foot, suddenly fighting for their lead with Graham off the field, starting with a desperate trysaving tackle from Holmes on Hodgson a couple of sets later. 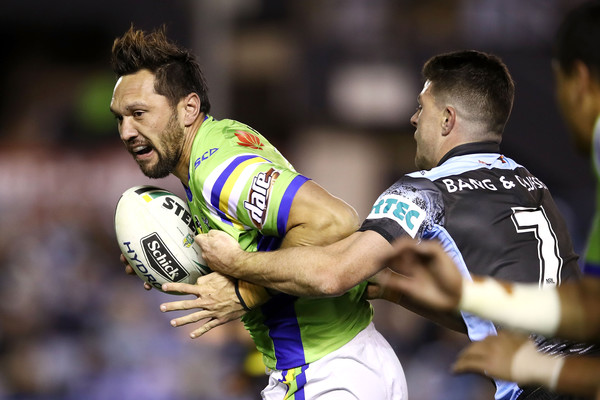 Meanwhile, the Raiders were congealing, as Rapana stepped around Lee and palmed off Moylan to send Whitehead through the line on the next set. Moments later Leilua made it a double, getting through and under Fifita, while Sam Williams clocked up a difficult sideline conversion, part of a pretty strong debut with the boot. The momentum of the game had totally changed, in a stark reminder of Graham’s importance, as the Raiders started to play like a totally different outfit, jacking into the late game acceleration that the Sharkies normally claim at their home ground. 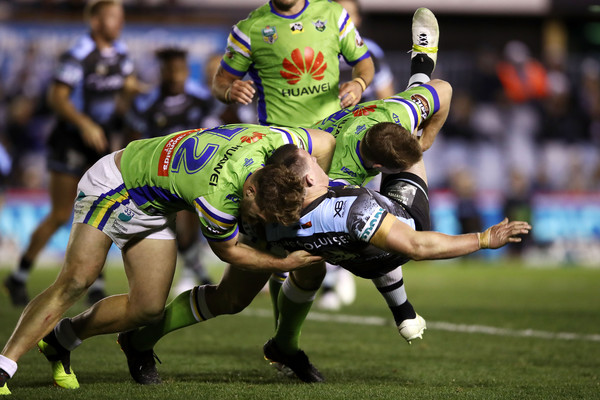 The high point for Canberra came shortly after, when Cronulla got down their end for the first time in the second stanza – thirteen minutes in – only for Bateman to level Gallen, and force him to cough up the footy, in one of the biggest tackles of the night so far. While the Sharks regathered a couple of sets later, their attacking options felt disheveled and messy compared to the opening half, paving the way for one of their messiest and most controversial tries of the 2018 season.

In essence, the try came down to whether the footy had been touched by Jesse Ramien on its way over to the right edge, where it was scooped up by Katoa, who scooted around behind the uprights to get it to ground. Incredibly, the Bunker ruled that this hadn’t been a knock-on, despite pretty clear evidence that it had bounced off the Cronulla centre’s bicep on its way to the edge of the attack.

More incredibly, the whole play had been shaped by miscommunication between the referee, the touch judge and the players, with the touch judge raising the flag as if he’d spied a knock-on, and Sutton lifting his whistle to his mouth – whether he blew it was unclear – leading the Raiders to relax their attack in anticipation of a changeover. Playing right to the whistle, Katoa ran through a non-existent defence, scoring the stealthiest try of the Sharks’ season, and probably the most contentious match-winning try of 2018 so far, since Canberra would only score four more points. 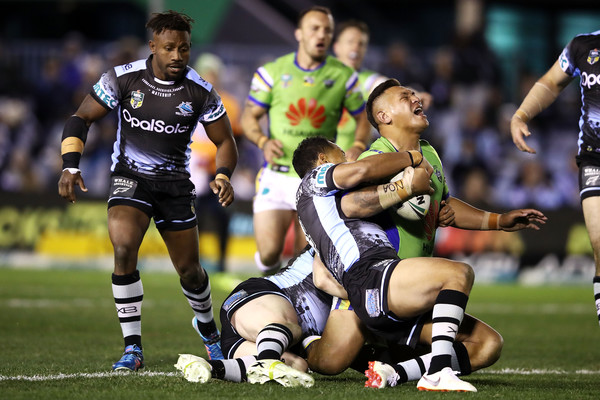 They came from Rapana, four minutes out by the end, and while the Raiders might have rared for an accelerated finish to match Holmes and Graham’s double effort in the first stanza, the game stayed with the Sharks. Shane Flanagan had run a pretty big risk in keeping Graham off for the second half, but it had paid off, as much from luck as from anything else, since this had been a very different Cronulla outfit over the back forty minutes. On the other side of the Steeden, this was easily the most frustrating loss in a very frustrating season for the Raiders, who will be looking for a way to reassert some pride when they take on the Storm at AAMI Park next week.