The Titans still hadn’t got over their 38-0 loss to the Broncos in Round 17 when they met the Knights at McDonald Jones Stadium on Saturday afternoon, having lost to the Roosters as well the week before. Only a try ended up separating the two teams, in a hard-fought contest that started with about ten minutes of fairly consistent sets, with only a dropped ball from Konrad Hurrell and some escalating field position for the Knights towards the end of this period doing much to disrupt the back-and-forth momentum.

The Newcastle possession paid dividends eleven minutes in, when a series of repeat sets culminated with a kick from Nick Meaney that initially looked to be a bit strong, skidding through Ash Taylor’s legs and well on its way to going too far, only to ricochet off Brenko Lee at exactly the right angle for Mitch Barnett to collect it on the line. Seizing his opportunity, Barnett gathered the football and ground it before Michael Gordon could get to him, cementing the first four points for Newcastle.

It didn’t take the Titans long to respond, however, thanks to a deft pass from Hurrell a couple of sets later that saw Gordon careen down the left edge for about fifty metres before he was finally brought to ground. While Nathan Peats made some good metres up the middle of the field, Gold Coast shifted the Steeden back to the left at the end of the tackle count, forcing Nathan Ross to boot the ball into touch at the tail end of a well-placed kick from AJ Brimson.

With a slow peel from Aidan Guerra on the first tackle, the Titans chose to kick for touch, consolidating immediately with some rapid movement out to the right, culminating with a great pass from Gordon and a rapid catch-and-pass from Brenko Lee that saw Anthony Don get the football down one-handed as Mitchell Pearce flew through the air to bundle him into touch. While Ken Sio might have missed the kick, keeping the score level at 4-4, the Gold Coast had exposed a chink in the Knights’ defence, and regained some momentum over the next couple of sets. 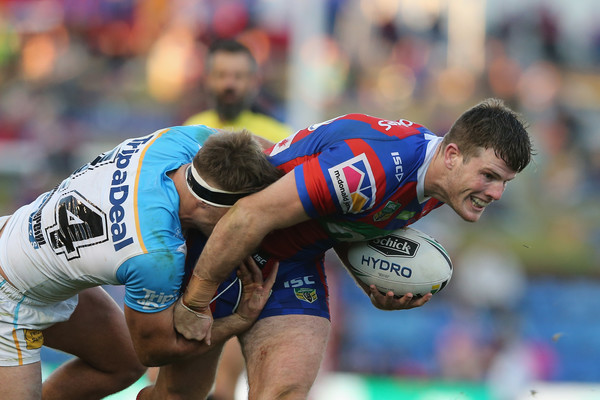 With two tries on the board, there was a bit of an arm wrestle for control of the game over the next couple of plays, as both teams made a series of big gestures to try and reclaim dominance. First, Pearce kicked on tackle two, only for Fitzgibbon to knock the football on while trying to ground it, due to a great chase and some tough pressure from Brimson. Then, the Knights got their own back, as Ross helped spearhead a pack defensive effort that saw Shaun Kenny-Dowall, Conor Watson and Fitzgibbon slam Philip Sami into touch on the Titans’ left edge.

Shortly after, Jarod Wallace charged down a promising Pearce kick after the ex-Rooster had been held down without a Gold Coast penalty a couple of tackles before, while Meaney responded by putting enough pressure on Gordon a set later to force him to cough up the high ball, forcing Don to scoot around and act as second fullback. In order to reclaim the game, one of the teams had to internalize all this back-and-forth momentum into the rhythm and structure of their own attack.

That’s just what the Titans did a couple of sets later, in one of the more memorable set pieces of their 2018 season. The play started with a rapid pair of passes from Peats and Taylor that saw the Steeden move to the outside of the field, where Kevin Proctor sent it back inside just as quickly, where it sailed through Mitch Rein before finding Peats once again, who had nothing but open space ahead of him, but still came to ground just a metre short of the chalk. 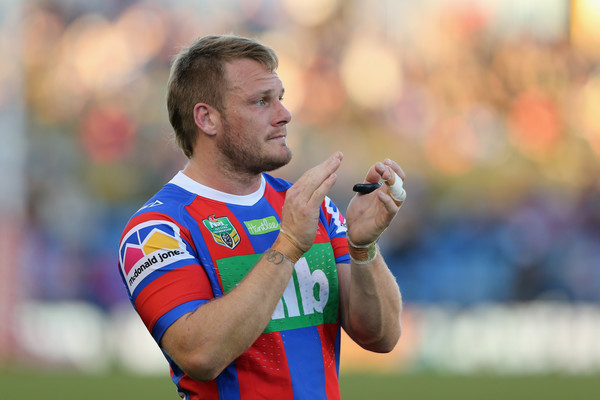 Nevertheless, Peats managed to continue the inside momentum of the previous play, lobbing the footy back to his left where it bounced off Ross’ forearm and into the arms of Moeaki Fotuaika, who crossed over for the second Gold Coast try of the night – a nice way to make up for an average last-tackle kick earlier in the match that had bounced lopsidedly into touch. This time, Taylor added the extras – the first kick points of the afternoon so far – bringing the Titans to 10-6 as the last ten minutes grew near.

For a moment, the Titans looked set to consolidate, thanks to an inspired kick from Taylor that bounced off the uprights and came very close to providing them with a chance to cross over once again. Some strong defensive work from Ross put an end to that, however, while Chris Heighington responded by earning his team a penalty midway through the next tackle count, and taking a quick tap as soon as the whistle blew to get the blue and gold army five metres out from the line by play two. 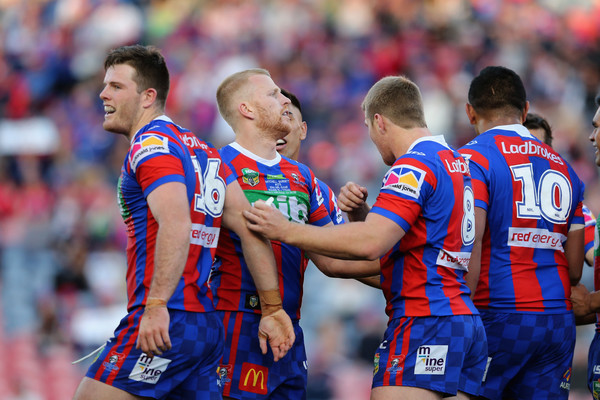 From here, Newcastle were all conviction, as Danny Levi tried to barge his way through the Titans’ right edge defence before surprising them with a rapid play-the-ball that saw the Knights shift the Steeden over to their right side just as quickly. They only lingered there for the briefest moment, however, before Pearce sent through a beautiful crossfield kick that Meaney leapt up to catch on the full, outplaying both Taylor and Sami before slamming to ground beside the posts.

In this vision of perfect, fluid communication between a young gun and veteran player, and between a Newcastle import and a Newcastle native, the Knights had the last word on the first stanza. While they might have still been two points behind, due to a penalty kick from Gordon at the thirty-third minute, this moment of consolidation played no small part in the confidence they showcased from the beginning of the second half – the confidence they needed to come away with a  six point win over a Titans outfit still smarting from their zero game against Brisbane.

Nevertheless, Gold Coast were the next to score, following on from a well-timed pass from Taylor and a double pump from Brimson, which put Sami across in the corner five minutes into the second stanza. On the restart, the Titans got their own turn to benefit off a ricochet, following Barnett’s effort in the first minutes, as Taylor kick bounced off Corey Denniss and allowed Taylor to regain possession before passing it across to Don, who crossed over for his eighth career double. 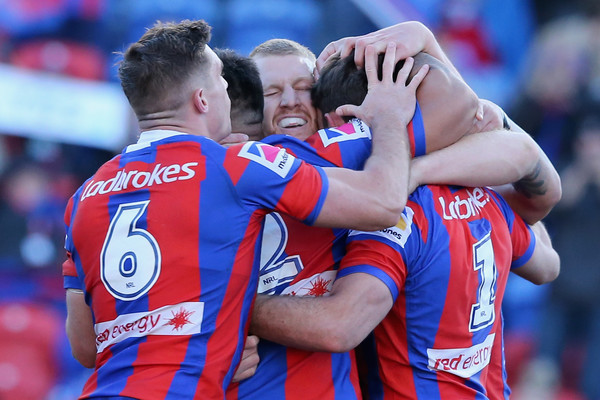 The Titans were now fourteen ahead, but these would turn out to be their last points of the night, as Newcastle commenced a tryscoring bonanza that saw them clock up twenty before before the game finished. For a second, it looked as if Gold Coast might be the next to score, though, after Hurrell knocked the high ball backwards before the Knights could get to it. If one of the Titans had managed to cross over they might have wrested the match beyond the Knights’ grasp, but luckily for the home crowd the red and blue army managed to regather quickly here, and prevent another four points being scored off the back of Don’s previous try.

Towards the end of the next set, Newcastle got six again. A couple of good runs from Barnett and Herman Ese’ese looked promising, only for Peats and Lee to hold down the fort with a strong trysaving tackle and a deft recovery of the football respectively. Still, with a penalty and a quick tap from Daniel Saifiti midway through the next set the Knights got another option to make the most of some additional field position, as Fitzgibbon signalled their determination by slamming to ground a foot from the chalk on the second tackle.

The Titans’ momentum plummeted further when Brimson was taken off for an HIA after running into Conor Watson. Earlier in the match, Heighington had been removed for a dislocated finger, and the symmetry of both teams having now lost a man seemed to steady the Knights as they waited for Brimson to be led off the field. For the last ten minutes, the Newcastle forwards had been raring for a twist-and-spin, and Fitzgibbon delivered a moment after play resumed, slamming through Rein and Keegan Hipgrave off a short ball from Levi for the gutsiest putdown of the game.

It was now Newcastle’s turn to score tries in rapid succession, as Levi clocked up a second try assist to help Barnett get a double in his fiftieth game for the club. The sequence played out like an intensified version of the contest between Barnett and Gordon that opened a game, as the big second-rower slammed the Steeden down moments before Gordo stuck out a boot to try and deflect the football from his grasp. Once again, Sio added the extras, narrowing the Titans’ lead to two points as the final quarter of the match got underway.

Sio then levelled the score a couple of minutes later, with a penalty kick following a second effort from Jack Stockwell. Between some verbal dissent from Wallace and the spectacle of Peats having his head bandaged following a nasty tackle, the Titans’ grasp on the game seemed to be slipping more and more by the minute. Yet while the Knights had built some serious escalation, there would only be one more converted try in the match.

It was still an elegant finale, though, as Watson found himself with the football at the tail end of a superb sequence of Newcastle field position, heading to the edge of the field as Shaun Kenny-Dowall crossed inside behind him, and then flicking the footy back for the best set play of the evening. Timed to perfection, it suggested a Newcastle outfit that would remain unflappable – and they did, notching up one of their most assured wins of the season, despite the close scoreline.

The Titans therefore have to wait another week to get some closure following their loss to the Broncos two weeks ago, and will be looking to make the most of a home ground advantage when they take on New Zealand on Sunday afternoon. Meanwhile, the Knights will be looking to consolidate further when they travel to Townsville to take on the Cowboys, who will also be desperate to make the most of their home ground after losing to St. George at 1300SMILES this round, as the end of Johnathan Thurston’s storied career draws near.