It was a torrent of tries for Melbourne against the Raiders at GIO on Saturday night, providing some catharsis for the purple army following close wins over the Warriors and Sea Eagles the fortnight before, in a pair of low-scoring games. With 44 points on the board, the Storm scored almost twice what they had in those two matches combined, while on the other side of the Steeden the Raiders were coming off a devastating loss to the Sharks in the Shire – a loss that may have played some part in Ricky Stuart’s eccentric decision to shift Jordan Rapana and Joey Leilua to the left edge of the backline.

For all their desperation, however, this would be a pretty drab game for the green machine, who started off with an apparently endless string of penalties that allowed the Storm to dig in deeper and deeper. The first two came from Luke Bateman, who was called offside shortly after kickoff, and then made a slow peel, setting up Cameron Smith for the first penalty kick of the evening.

To be fair, the Raiders were a bit unlucky with the next penalty, which occurred after Leilua made some metres up the left edge and popped the footy out to Rapana, who sent it back inside to him in turn. It had all the markings of a classic Lepana moment, only for Leilua to cough up the ball following an early tackle from Nelson Asofa-Solomona. Looking directly in his partner’s direction, Rapana noted the error immediately, and tried to remonstrate with the refs, but the call went Melbourne’s way. 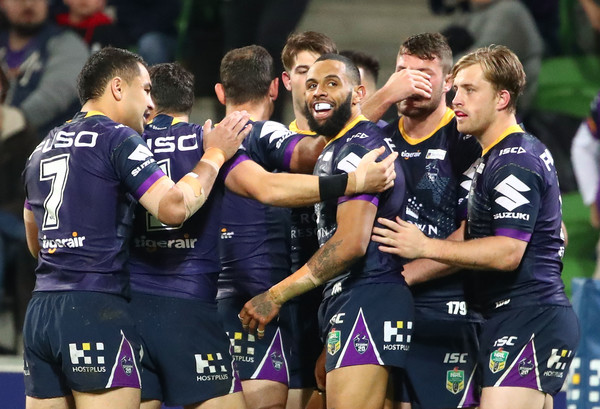 A couple of tackles later an unusual pass from Billy Slater sent Felise Kaufusi over on the Storm’s right edge. In slow motion, you could see that Slater had only just maintained possession of the Steeden as he sailed it over Sam Williams’ head – it was almost a loose carry – but Smith lost no time in getting himself reading for the kick, confident that it would be called a try, as indeed it was after video review. 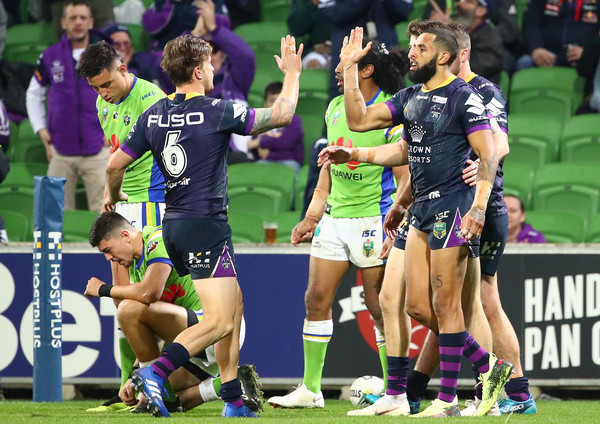 It had been a tough period for the Raiders, but they did get the chance at some sustained field position shortly after, as a long pass from Cameron Munster led to a rare handling error from Josh Ado-Carr halfway up the field. Long after the Steeden skittered over the sideline, you could see the frustration on the Fox’s face. A couple of tackles later, Slater was forced to gather up a Josh Hodgson grubber in goal, as Canberra prepared to make the most of the first dropout of the night.

Yet while Slater might have been forced into some clutch defence before the dropout, his presence of mind in cleaning up the football, and not knocking it on, arguably outdid anything the Raiders had been able to bring to their game over the preceding minutes. No real surprise, then, that the dropout ended with a fizzle, since while a knock-on from Will Chambers initially promised a repeat set, a lost ball from Joseph Paulo two tackles later meant the Storm got possession once again. 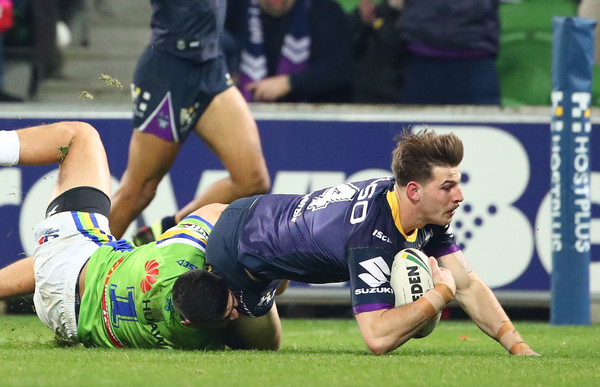 Two more penalties now occurred in quick succession, the first for Iosia Soliola for being offside, the second immediately after, thanks to some verbal dissent from Josh Papalii. Nothing looks quite so vulnerable, or galvanizes the opposite team, quite like verbal dissent, and moments later, Munster scooted through the line for one of the best solo runs of the Storm’s season – a left foot pivot, a right foot pivot, a right arm fend on Bateman, and then a final left foot pivot to get past Nick Cotric and score beneath the posts.

The Storm were now fourteen points ahead – but, then again, they were only fourteen points ahead. If the Raiders scored, they had a chance of getting back in the game, since the scoreline didn’t really reflect how categorically the Storm had run rings around them, even though it eventually would. For the moment, however, Canberra got some headway as Soliola caught the ball right on the line and dodged out of a tackle from Curtis Scott to score in the right corner with the Fox on his back.

Nevertheless, this didn’t build any momentum for the Raiders, as Williams missed the conversion as the rain started to drive down, and Leilua made a mistake in the play-the-ball two tackles into the restart. The last thing the visitors needed was an unforced error, but things got worse when the Storm proceeded to put in one of their most probing and organized sets of the whole night.

Both Slater and Welch looked close to crashing over on the third and fourth tackles respectively, while Smith controlled the play beautifully, most dramatically with a 360-degree spin on the left edge to dishevel and disorient the Canberra defence. On the last tackle, Hughes twisted out of an enormous effort from Leilua, balancing on his left foot with the ball in hand before righting himself with a huge cut-out pass to Suliasi Vunivalu, who was sparsely marked out on the right edge. 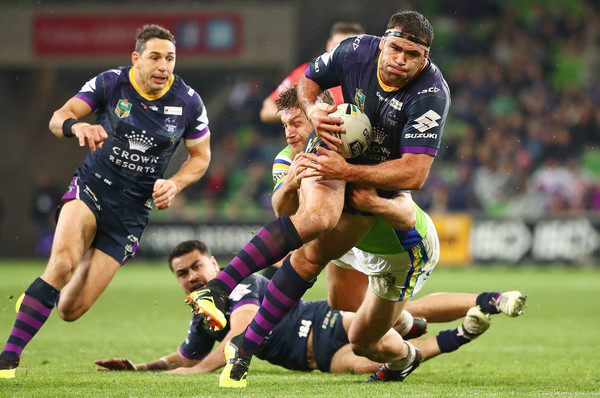 A one-on-one contest between Rapana and Vunivalu now ensued, as the Canberra winger barged over three metres out and tried to slam his opponent into touch. But Vunivalu was too strong, actually using Leilua as leverage to pivot his way over the line, bringing the Storm to 18-4 after Smith followed Williams by failing to boot through the extras.

As the rain bucketed down, the errors started to accumulate again for the Raiders – from Brad Abbey, Dunamis Lui, Liam Knight and finally Blake Austin, whose second effort to send Scott over the sideline set up Scott to score a moment later. All it took was one tackle and a superb string of passes over to the left edge for the big no. 4 to get on the outside of an ankle tap from Soliola, and slam the Steeden to ground before Cotric could dash in to clean things up.

It was a rousing way for the Storm to end the first half, and yet the second half was almost mirror image – four tries scored, three of them for Melbourne. Things started bad for Leilua, who made an error on the first tackle of one of the early Canberra sets, offloading to Rapana on his left, but completely mistiming the pass. On the next set, Smith got the ball across to Slater, who grubbered into the left corner, where Abbey was defied by the slippery Steeden, but Ado-Carr made the most of the wet conditions to slide across the turf for the easiest putdown of the night so far.

It was the Fox’s first try in five weeks, following on from his double against the Knights, making him the equal top tryscorer of 2018 so far, along with David Fusitua. The Storm were just as good in defence, too, as Slater and Chambers stopped Rapana thirty centimetres out from what looked like a certain try, and Munster put in a huge hit-up on Cotric at the end of the kick chase, rattling the Raiders so brutally that Abbey only made about two metres on the next run. 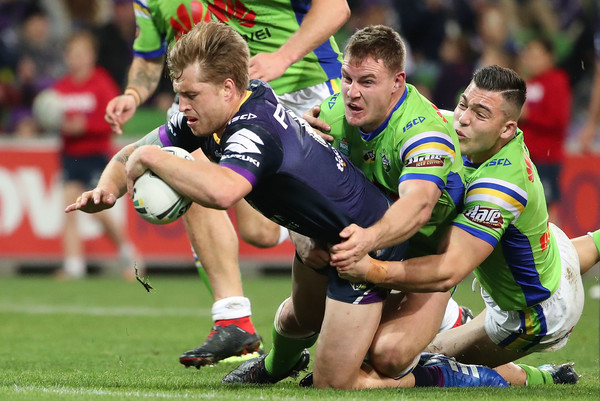 Meanwhile, Hodgson got the official warning after the Raiders received their fourth straight penalty to match their four at the start of the match – this time for a grapple from Liam Knight. Interestingly, it was an error that got the green machine their next and final try, as Paulo lost the footy during a tackle from Kaufusi right on the line, but luckily lost it backwards, allowing Leilua to dart in, pick it up with his right hand, and slam through Smith and Slater to twist around for a one-handed putdown beside the left upright.

You couldn’t blame the Raiders for hoping for a miracle comeback following Penrith’s magnificent effort earlier in the afternoon, but it was all Melbourne from here, as two of their biggest men executed the next four points. Collecting the footy five metres out and directly in front of the posts, Dale Finucane turned a shoulder as if to take the tackle, only to spin the ball back to Nelson Asofa-Solomona to run a diagonal line and burst through Austin and Tapine to score to the left of the posts. 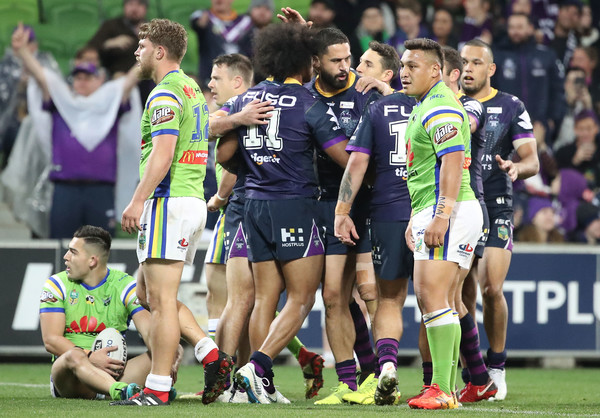 He’d scored in exactly the same place where Leilua had at the other end, and so this seemed to swallow up the momentum of Joey’s four points before the Raiders had any chance to capitalise on them. On the restart, all the Storm’s brilliance crystallised into a perfect passage of play – a kick from Munster halfway up the field, a brilliant pickup and run from Ado-Carr, and finally a pass back inside to Scott ten metres out for the line, where the no. 4 skipped out of an ankle tap from Soliola to put down the most elegant and economical four points of the night. 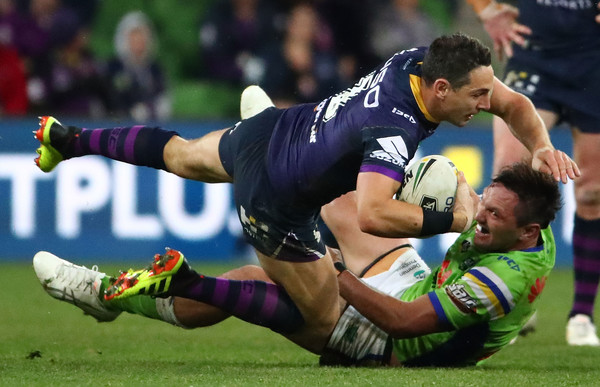 It was a fitting conclusion to one of the Storm’s most decimating games in weeks, and the real closing note of the match, despite the fact that there were fifteen more minutes, and that Smith clocked up a final penalty goal following a flop from Hodgson shortly after. This is the kind of form that Melbourne will be keen to showcase against the Bunnies at ANZ next week, while the Raiders will be looking to heal their disappointment when they take on a resurgent Panthers outfit in Penrith.