The Cowboys were coming off a loss to the Dragons, and the Knights off a win over the Titans, when they met in Townsville on Friday night. The team with the best completion rate in the competition had travelled north to take on the team with the worst completion rate in the competition, and it showed over the first eleven minutes, with the Cows only completing one set while the Knights racked up the opening two tries in quick succession.

The game started with a North Queensland error, as a strip from Jason Taumalolo on Jacob Lillyman got Mitchell Pearce the platform for a superb crossfield kick at the other end of the park. With Te Maire Martin cleaned up in goal, the Knights got a repeat set, and two tackles later some deft passing from Pearce and Jack Cogger sent Lachlan Fitzgibbon through a yawning gap between Johnathan Thurston and Kane Linnett. All it took was a left foot pivot to dispose of Martin’s last line of defence for the big second-rower to level his tryscoring tally of 2017. 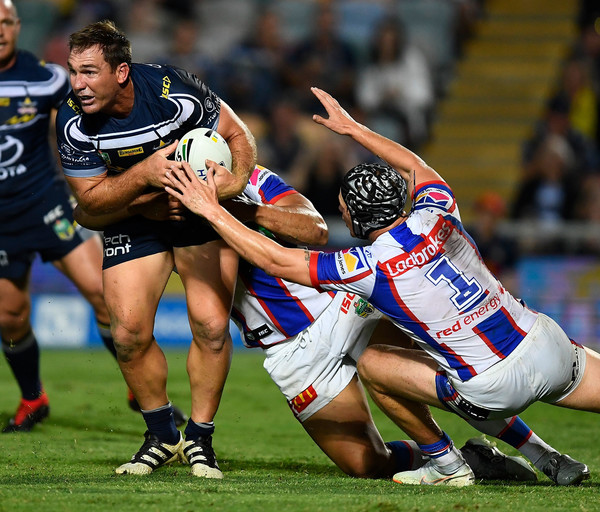 Newcastle almost got another second-tackle try when Kalyn Ponga broke through the line a couple of sets letter, before getting the ball across to Mitch Barnett. The no. 12 bobbled the football for the briefest of beats, and then regathered it, but it was enough time for Kyle Feldt to scoot across and slam him to ground before he could score. Nevertheless, a lost ball from Thurston on the next set, under pressure from Cogger and Danny Levi, got Newcastle possession once again.

From there, the Knights quickly capitalized, gaining additional field position after a hand in the ruck from Jake Clifford just as Barnett was putting through a quick play-the-ball. A tackle later, a short ball from Levi sent Aidan Guerra across, between Jake Granville and John Asiata, for one of the most humiliating tries to be scored against the Cowboys this season. Missing their tackle right on the line, they’d allowed the ex-Rooster to slam through untouched from five metres out, and with Ken Sio adding the extras, once again, the visitors were now two converted tries ahead.

The Cowboys now needed a surge to avoid their worst game of the season, and they got their opportunity a few sets later. It started with a great take from Martin under a 40/20 attempt from Pearce, and continued when Levi was sent to the sin bin for a hand in the ruck on the next tackle, following an escalation of Newcastle penalties over the preceding ten minutes. Levi was clearly frustrated, not even running a straight line to the sideline, but that just made the Cowboys feel like they had the upper hand.

Sure enough, four tackles later, they scored, thanks to some good work on the right edge from Taumalolo and Asiata to make up for their relatively poor form earlier in the game. Once they’d got the footy over the left of the Cowboys’ attack, Thurston had a runaround with Gavin Cooper before sending an enormous cut-out pass across for Justin O’Neill to score in the corner. This was just the decisive gesture the Cows needed from Thurston, and when he curled through the conversion it felt as if they were well on their way to a genuine comeback.

The comeback would eventually arrive, but it would arrive much later, and be much narrower, than the home crowd were hoping for at this stage. At the start of the next set, Taumalolo and Asiata undid their form again – Taumalolo by only just managing to get the Steeden back into the field of play following Ken Sio’s kickoff, Asiata by coughing it up on the next tackle, gifting the Knights possession right in front of the posts, rather than an opportunity for Thurston to execute something special on the restart.

A slow peel from Jordan McLean got the Knights a penalty kick, although there was a bit of momentary consternation amongst the Newcastle camp as to why the North Queensland prop’s infraction hadn’t resulted in a sendoff too, given that the Cows had received a formal warning of their own earlier in the match. Still, Newcastle were now beyond a converted try lead, while a second linebreak from Ponga, combined with a well-timed kick over the sideline, affirmed they could hold their own despite having a man down.

With eleven minutes on the clock, Pearce undercut that a bit with a rare error, kicking the footy out on the full just when the Knights were on the verge of consolidating again. Nevertheless, Thurston and Cooper were unable to repeat their runaround this time, while Pearce won the battle of the veterans with J.T., reading his grubber so well that it was almost as if he’d planned and kicked it himself. The moment the Steeden left Thurston’s boot, and deflected off Herman Ese’ese, Pearce stormed over the try line and gathered it into his chest, losing and then recollecting it, before diving back into the field of play, determined to avoid a dropout.

It was a heroic play from the ex-Rooster, and a rallying-point for the team, made all the more dramatic by the blood that continued to drop down his face from a head cut sustained earlier in the game, which was proving resistant to bandaging. A huge tackle from Linnett on Cogger initially looked like the necessary rejoinder from the Cows, but it was pinged as a shoulder charge, and North Queensland now found themselves defending fifty metres back up the field.

Four tackles later, Cogger once again sent Fitzgibbon over the line, as Ponga lingered behind the play to lure some of the Cowboys defenders off their line. In the combination between Cogger and Fitzgibbon, and the way that Fitzgibbon was able to slice through the North Queensland defence as if it didn’t even exist, these four points combined the best of the two opening Newcastle tries, bookending the first stanza and cementing the Knights’ control and command over the game as a whole. 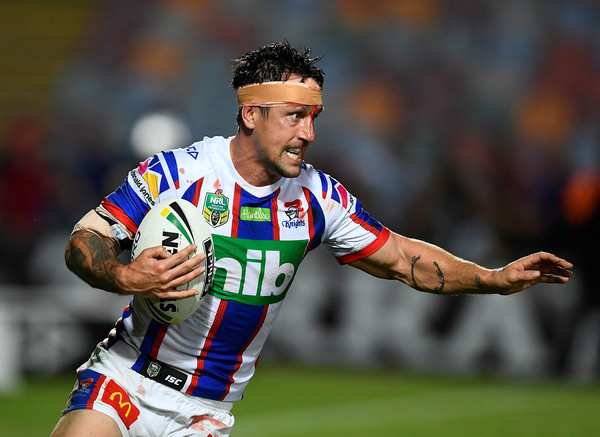 Meanwhile, the Cows continued to struggle, as errors from Cooper and Thurston in the last two minutes took the edge off their try-assisting combination for O’Neill. A pass from Thurston to Cooper went awry five minutes into the second half as well, but with Barnett coughing up the ball a moment later North Queensland seemed to tap deeper into their inner reserves of strength, as Thurston now helped orchestrate the passage of play that turned the game back their way. 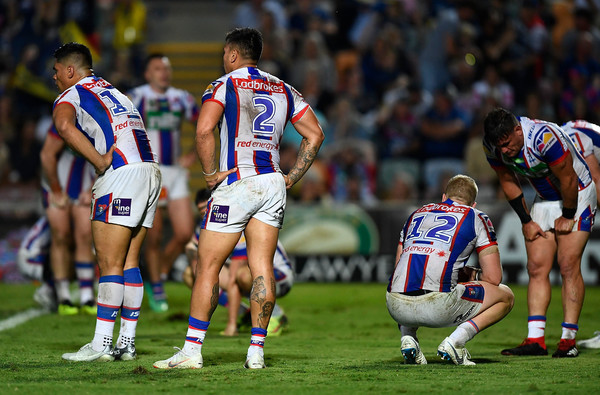 On the next set, Scott Bolton twisted and spun to ground right beside the posts, challenging a couple of waves of Newcastle defence until Fitzgibbon showed he could be as crucial in trysaving as in tryscoring. The second-rower was not only the last line of defence, he was the only significant defender by the time that Bolton had got within grounding distance, keeping the ball off the turf with his left leg before scooping his right hand beneath it once Bolton had stabilised his position.

Thurston now showed why he’s so brilliant at organizing games, resuming the Cows’ momentum immediately with a left foot grubber that trapped Sione Mata’utia in goal, forcing a goal line dropout. An inside ball from J.T. almost sent Martin across on the third tackle, and an outside ball did send Coen Hess across on the fourth tackle, as the big North Queensland second-rower simply steamrolled over Ese’ese to compound Thurston’s immaculate timing with just the display of speed and strength the Cowboys needed to get themselves back into the game.

Sure, Thurston’s conversion kick might have ricocheted away to the right, but he made up for it with a dazzling passage of the play on the restart, sending the footy across Martin’s chest to Linnett, who made the most of a disheveled Newcastle defence to pop it across to O’Neill on the left edge of the field. For a moment, O’Neill looked as if might try to run the length of the park, but he made an even better decision, booting the footy downfield where Thurston was ready to scoop it up and slam it down all in one triumphant moment.

In a season that has been so frustrating for Cowboys’ fans, and so out of keeping with the scale and legacy of Thurston’s impact upon the game, there was something incredibly cathartic about this passage of play, especially because it meant that J.T. was now fourth on North Queensland’s all-time top tryscorers’ ladder. This time, he got the conversion to put the home team within two points of the Newcastle lead, as the first stanza started to feel like a distant memory, or even a separate game.

All that momentum would only result in one more try, but it was a crucial one, not simply because it finally put North Queensland ahead at the seventy-seventh minute, but because it came from Gavin Cooper, who needed a bit of a comeback himself after an uncharacteristically messy night of football. Just as important, the Cowboys prevented the Knights scoring any more points, tightening their defence as they prepare for three fairly challenging weeks of rugby league.

Indeed, with games against the Broncos, Roosters and Sharks, this win might be critical in preventing the Cowboys getting the wooden spoon during the 2018 season, along with two of the most important points that they have scored all year. Meanwhile, the Knights will be looking to recover and resume the stunning form they showcased in the first stanza here, when they take on a Tigers outfit revived by wins over the Rabbitohs and Dragons next weekend.