Errors were the difference in the Knights’ home game against the Tigers on Friday night, with both teams clocking up three tries and two conversions, but the Tigers adding four penalty goals, kicked by Esan Marsters, and a final field goal, kicked by Luke Brooks. The first Newcastle mistake came in the first second, when the ball was booted into touch by Ken Sio, who was taking over kicking duties while Kalyn Ponga was nursing his injured ankle. 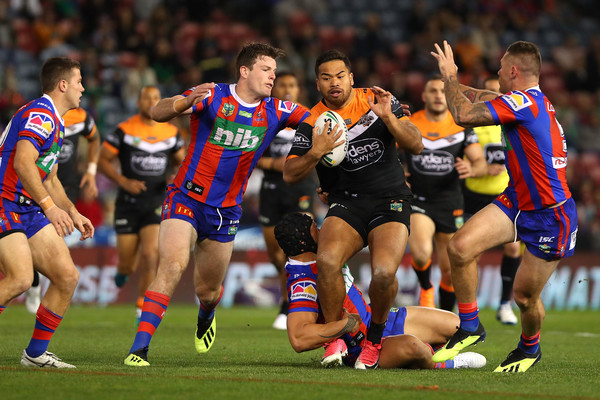 The next error followed short on its heels – a flop from Danny Levi that saw Marsters shoot through the first penalty goal a minute into the match. For a couple of sets, the football moved fluidly up and down the field but a pair of back-to-back errors from the two halves starts a bit of a disrupted period for both sides. First, it was Benji Marshall who coughed it up on the fourth tackle, thanks to an awkward pass from Brooks. The Tigers tried to make up for it with their defensive response, but a slow peel from Ben Matulino two tackles in ended up having exactly the opposite effect. 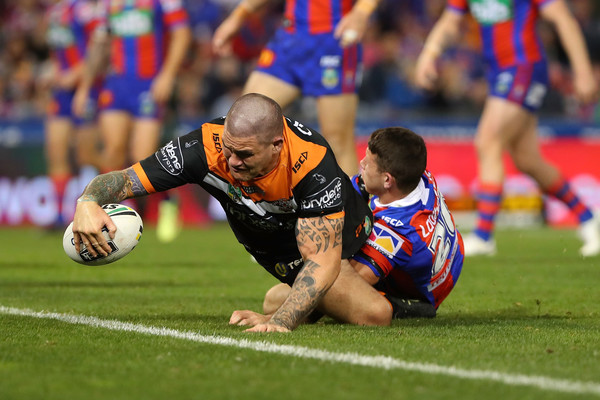 Nevertheless, Mitchell Pearce ended the set by knocking on just as Benji had a minute before, this time off the back of a good pass from Danny Levi. Once again, the Tigers were too enthusiastic in defence, with Mbye now making a high tackle on Ponga just after the Newcastle fullback had gathered up one of Benji’s best kicks of the night. An even more disappointing fumble came moments later, when Lachlan Fitzgibbon was tackled just as he was sending a try assist across to Sione Mata’utia, who would probably have managed to twist and spin if he’d received it. 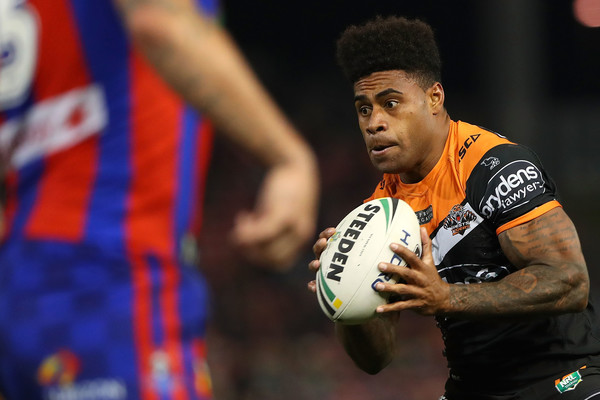 The first dropout of the night gave the Tigers the platform they needed to score, after Robbie Farah slinked through a grubber that Ponga was forced to send into touch. On the next set, Kevin Naiqama skidded right along the ruck, and Farah skidded left, where a short kick from Benji initially appeared to have been cleaned up by Ponga. At this crucial moment, however, Sione Mata’utia was pinged for holding back, and the Tigers had enough momentum to comfortably tap and go. 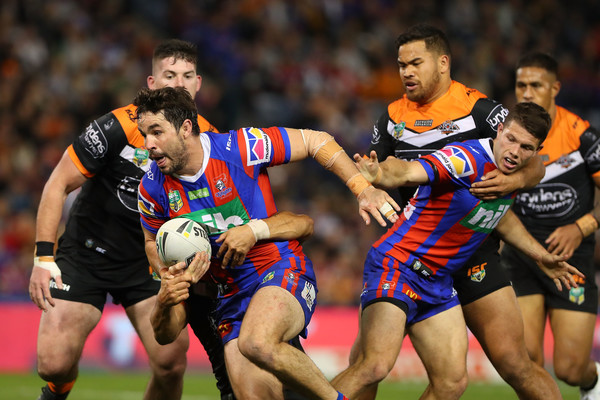 They crossed over a tackle later, thanks to a deft pair of passes from Farah and Brooks that saw Russell Packer get hold of the football at the ten metre line. Fitzgibbon was there to meet him, and actually stopped him in his tracks, but the big Newcastle second-rower seemed to be expecting an offload, rather than a run at the line, so he was taken by surprise when Packer slipped out of his grasp and traversed the remaining ten metres for a twist-and-spin from ten metres out. 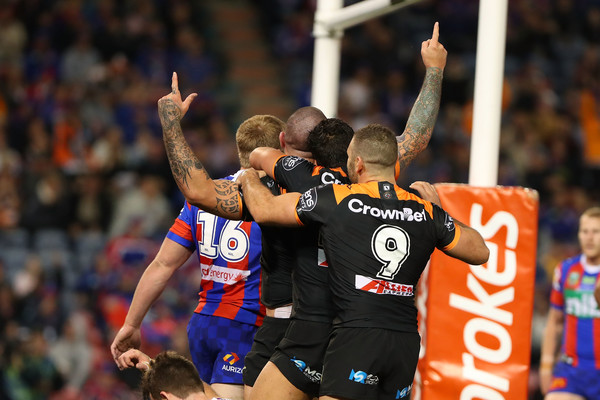 The twenty-minute mark was closing in and the Knights hadn’t made any kick metres to speak of, so it was relieving for the home crowd when Pearce sent through a 40/20 shortly after. While Mbye might have cleaned it up at the last minute, it was a sign of strength for the Knights, and particularly for Pearce, who had been a bit quiet in the wake of his fumble. 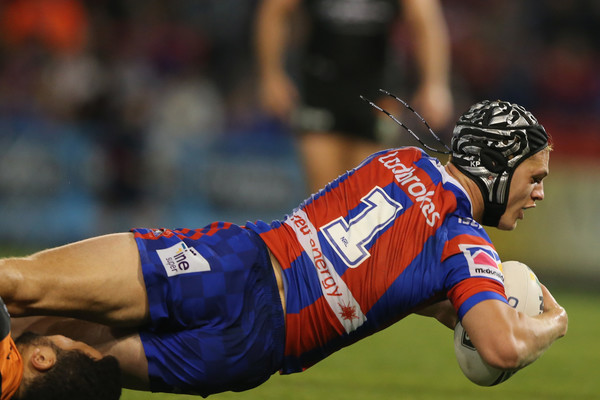 No surprise, then, that it was a crossfield kick from Pearce that set up the first Newcastle try of the night, as pinpoint aim allowed Mata’utia to leap up and gather the Steeden into his chest, with the kind of conviction that, in the replay, made it clear that he was determined to score. Sure enough, he came to ground and quickly pivoted around Naiqama, reaching out an arm to slam the Steeden down with Elijah Taylor desperately clinging to his legs, and Brooks unable to even get a hand to him.

Like Packer’s putdown, this was just the gutsy physicality needed to compensate for all the messy handling and fumbling play that had plagued the Knights’ night so far. Nevertheless, a missed conversion from Sio, an error on the restart from Josh King, a second kick out on the full from Sio, and then a professional foul and sin bin for Sio meant that Newcastle had decelerated again by the time the last ten minutes came around. 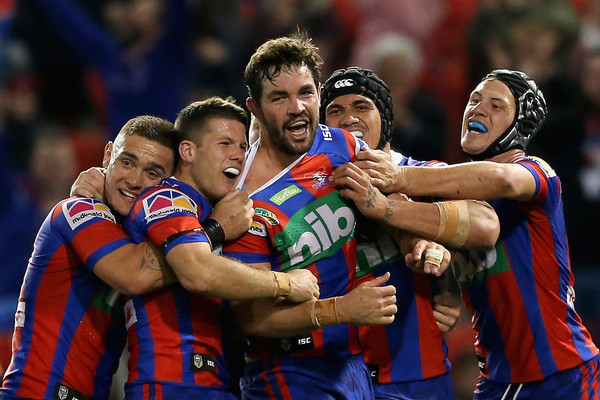 Still, the Tigers also started to lag as the siren drew near. They got a seven tackle set about five minutes out, and made some huge headway after a tap and go from Mbye, only for a bad pass from Brooks to cause David Nofoaluma to fumble the football out on the right edge. It’s rare for Nofa to show frustration, but he had a few words to say to his halfback here, as the Tigers seemed to have sunk back into the messy play of the opening minutes, especially once Sio trotted back without the visitors having scored once in his absence. 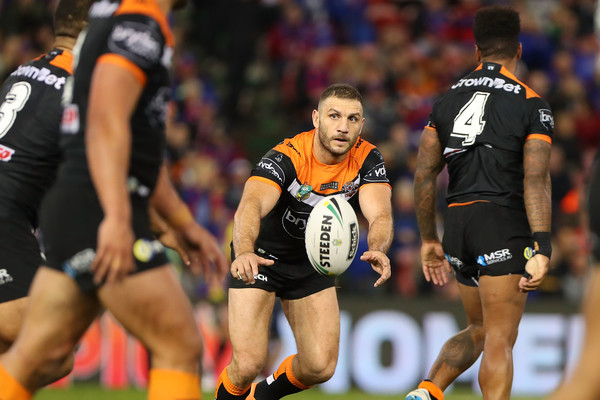 Nevertheless, the Knights’ errors trumped the Tigers’ errors – and a pair of them now gave the black and gold army the platform they needed for one more try before they headed into the sheds. A rare stuffup from Ponga under the high ball was followed by an escort penalty from Jack Cogger, and the Tigers chose to tap and go, crossing over so quickly that it seemed to take even them by surprise. Chalk it up to Brooks, who dummied and ran on the right edge two tackles in, slicing past Pearce and Barnett to make up for his earlier pass to Nofoaluma, and foreshadowing his field goal at the end of the next half. 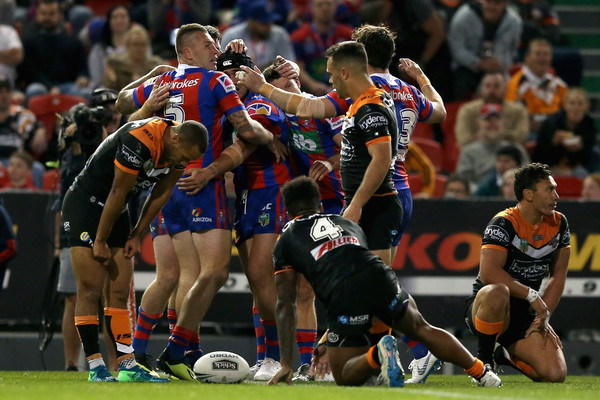 While Marsters might have missed the conversion, the Tigers were still quadruple the Knights at 16-4 – a pretty good place to be considering that they had lost 16-4 to the Bulldogs at ANZ the week before. Determined to double down after Pearce was taken off with a quad injury, the Knights looked close to scoring the first try after they returned to the field, only for the Tigers to showcase the defence that has served them so well in 2018, culminating with a terrific trysaving tackle from Brooks. 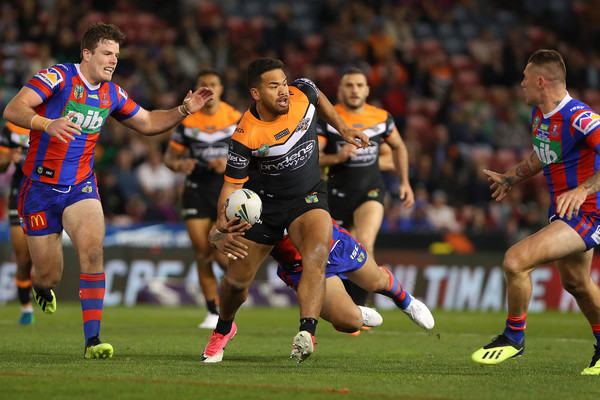 It came at the expense of Sauaso Sue being report for lifting a knee into the tackle, but the Tigers quickly regathered, and got themselves another dropout after Garner dragged Cogger in goal following a grubber from Brooks. Once again, the repeat set led to points, this time on the back of one of the best Brooks-Farah linkups of the year, as the young halfback dummied right and then shot a left-handed offload across to his no. 9, who sailed over for his first try of the 2018 season. 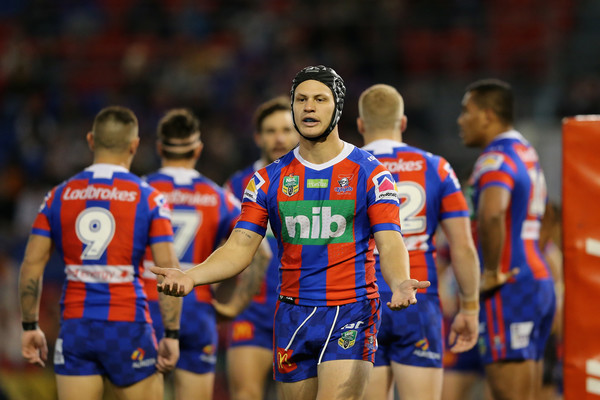 If Corey Thompson had crashed over a couple of minutes later than we would probably have been looking at a Wests Tigers landslide, but with Shaun Kenny-Dowall bundling him into touch, the visitors decelerated once again. On the next set, Mbye lost the football at the back end of a Ponga kick, catching it in the air without a couple of fingers, only to lose it again, and not quite manage to knock it backwards. 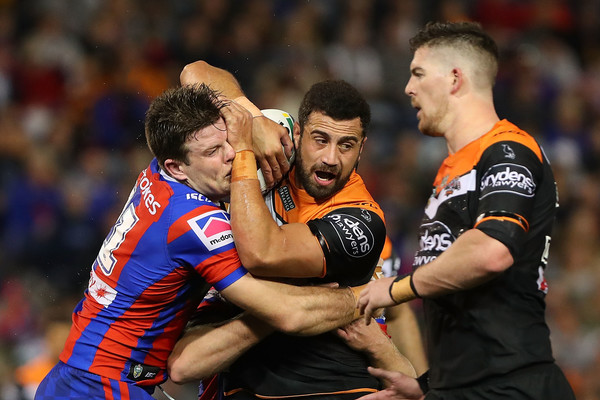 All Mbye needed to secure the catch was another step, and his body language seemed to encapsulate an entire team that had been suddenly deflated in the wake of SKD’s trysaving effort on Thompson. A penalty for Farah soon followed, and when Marshall passed the footy straight to Mata’utia, the writing was on the wall. One tackle later, Ponga mirrored Brooks by dummying and running from the ten metre line, pivoting off the right foot as Elijah Taylor came off his line, and coming to ground with Matulino wrapped around his legs, in a true David and Goliath battle. 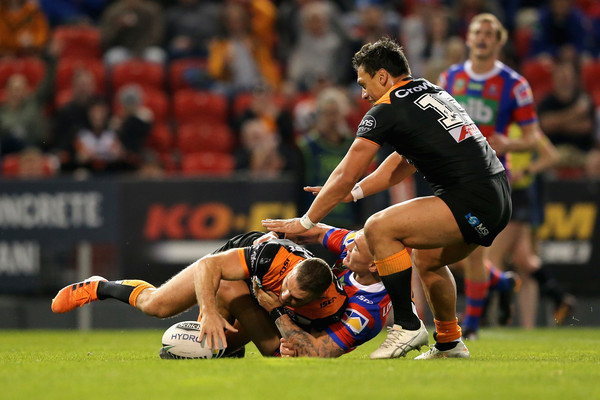 The Knights made it a double shortly after, as a pass from Levi sent Cogger deep into the line, where he sent a short ball across to Aidan Guerra at the ten metre threshold that had proved such a powerful tryscoring platform across the course of the evening. Sure enough, Guerra chose to run the footy, breaking out of a tackle from Marshall and managing to keep his right arm off the ground under a follow-up tackle from Mbye, before slamming the Steeden down when he was sure of hitting the turf. 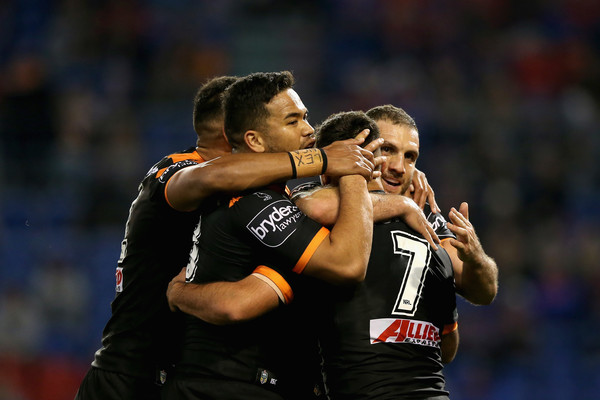 With Sio slotting through the extras, Newcastle were now only a converted try behind the Tigers, and seemed to have gathered enough momentum to coast through to a last-minute in. Yet these would be the last points that they would score, as their errors came back to haunt them in the final minute of the game, when Marsters booted through two final points following a leg pull from Herman Ese’ese. 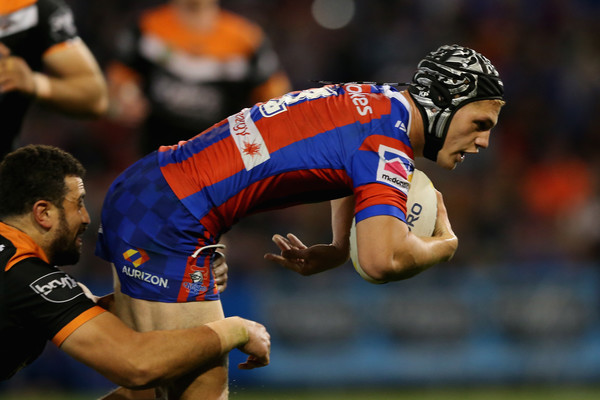 While the Tigers wouldn’t score another try either, Brooks made it clear that they weren’t simply coasting on Newcastle’s shortcomings by slotting through a field goal six minutes out from the end – a fitting end to a game that had seemed to both dramatise and then resolve some of the no. 7’s issues with consistency over the year. With matches against the Warriors, Panthers, Sharks and Dragons, the Knights now have arguably the hardest run to the end of the season, while the Tigers will be looking to continue this winner’s high with a victory over the Raiders at GIO next week.