There’s always footy talk about Jarryd Hayne, but it’s escalated in the last couple of weeks as the former 49er has started to showcase some of the form he promised to bring back to Parramatta at the start of the 2018 season. Whether it’s his desperation to renew his contract, or the cessation of his stomach problems, the Hayne Plane has started to manifest himself again in the last couple of weeks, lending Parra’s horror season a bit of pride and dignity as the year comes to an end. 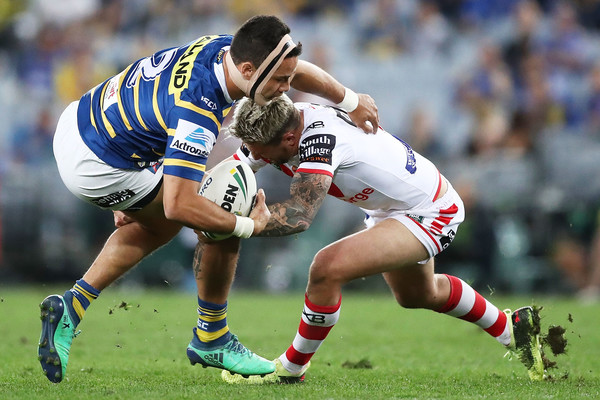 Saturday night’s game against the Dragons was the culmination of this process, as Hayne and Mitchell Moses linked up for two opening tries that together constituted the single best opening of the 2018 season for the blue and gold army. Both came off a strong platform from the forwards, with Nathan Brown sending the footy across to Moses in the opening minute for the ex-Tiger to lob a parabolic harbor-bridge pass across to Hayne to score in the right corner of the park.

Hayne might have had his face strapped for a cut, but it didn’t sway him from scoring again a mere minute later, thanks to a deft pass from Kane Evans, who drifted across the ruck like he was the lithest player on the field, before sending a cut-out pass across to Michael Jennings. From there, Jenko stormed up the sideline, getting the Steeden to his halfback, who made his way to the right corner once again, surveying the situation and anticipating the play as leisurely as he ever has, before passing to Moses, who was coming up inside for support.

In a final twist, however, the young halfback popped the ball back to Hayne, who slammed through a wall of St. George jerseys to score his second try. He’d now scored a full quarter of his 2018 tries in the first three minutes of this match, while the combination of Moses and Hayne that every Eels fan had been hoping for this year had finally showed just how much it could yield. This time, Moses landed the conversion, bringing Parra to a 10-0 lead with seventy-six minutes left to go. 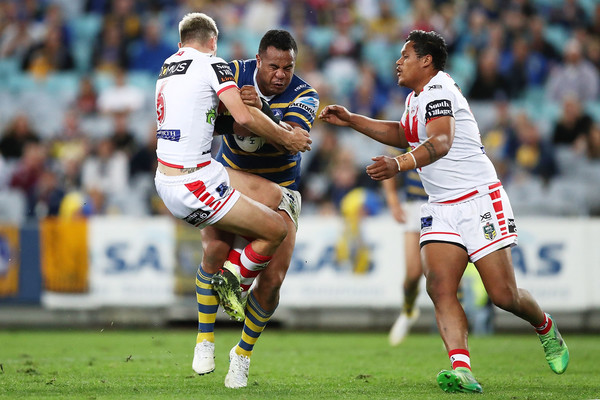 Unfortunately for the away crowd, this was just the beginning for the Dragons, who had clocked up six penalties by the time that Matt Dufty lost the football halfway through the first stanza. An intercept from Nene Macdonald prevented a wide pass from Corey Norman to George Jennings mirroring Moses and Hayne’s efforts on the other side of the field, but even then Macdonald would have probably gathered the football and run down the other end if he’d been firing at full capacity. 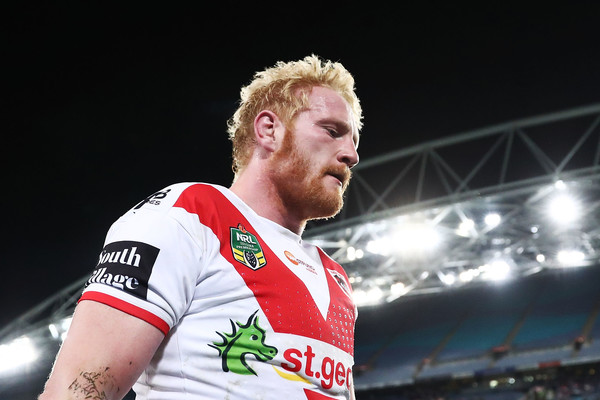 The Dragons got a penalty of their own shortly after, thanks to a mistake from Marata Niukore, in what initially looked as if it might be a bit of a shift in momentum. The next mistake came from the Red V, though, as Cameron McInnes was binned for a leg pull that prevented Moses making a linebreak. Given that the Warriors scored all of their points when Dufty was binned last week, this was a worrying prospect for the St. George faithful, especially because the binning occurred at roughly the same point in the match.

Parra didn’t score right away, but a passage of play now ensued that was even more dispiriting for the Dragons than a mere four or six points, as Gareth Widdop saved a try but dislocated his shoulder in the process. It was a sombre sight indeed to see him led off the field, as the Red V had to cope without their hooker, their five-eighth and one of their biggest forwards in Paul Vaughan, whose look from the box said it all as Widdop was being led gingerly from the park. 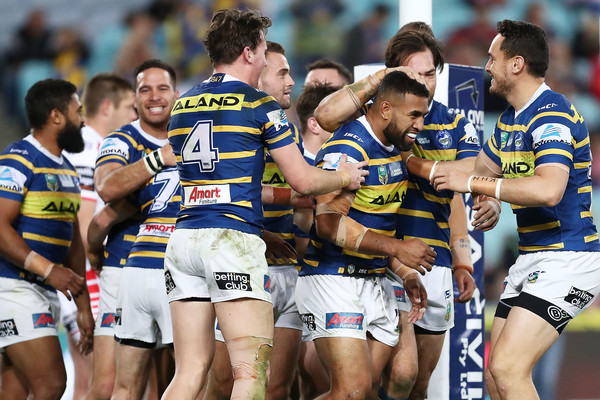 Things went from bad to worse as Euan Aitken made the next mistake and George Jennings scored immediately after, storming through Jack De Belin and Luciano Leilua after some deft decoy work from Hayne provided a distraction. Another penalty for the Dragons now gave both Kurt Mann and Jeremy Latimore the chance to make it right to the line, but once again Hayne was the winner, bringing the football back into the field of play as emphatically as if he was scoring another try.

With Macdonald losing the footy just as McInnes was set to return to the field, it was clear that half time couldn’t come soon enough for the Dragons, who were now watching their finals chances starting to slip away before their eyes. Just to rub salt in the wound, Hayne bookended the first stanza with a hat trick, beating both Mann and Pereira to the bounce after a brilliant fifth-tackle kick from Jaemon Salmon.

By this stage, the Red V were playing for pride as much as for points, and they had to be the next to score if they were to retain any self-belief over the rest of the match, let alone the next couple of weeks. You could almost hear the collective sigh of relief, then, when Leilua successfully wrested the football away from Michael Jennings on the back of a Ben Hunt kick, although without Widdop on the field the scoreline remained at 22-4. 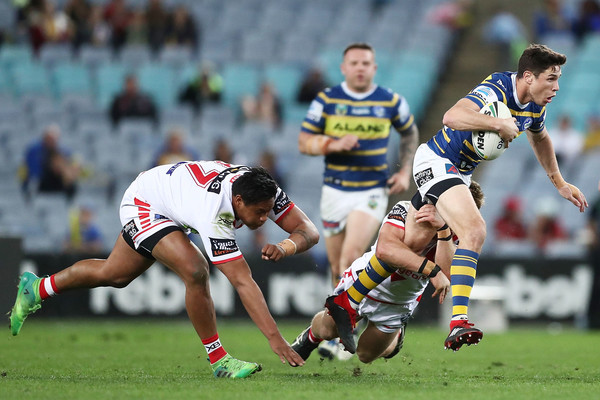 Still, Parramatta were the next to score, in the single most embarrassing moment of the night for the Red V. It started with a grubber from Moses and ended with Clint Gutherson grounding the ball, and yet somewhere in between the Steeden made its way past both Hunt and Dufty, both of whom could have easily booted it into touch, or even made a play at taking it back across the try line, but instead failed to communicate their intentions to each other at this critical juncture.

Even if you’re not an Eels supporter, it would be hard not to find it exhilarating to seeing this struggling team manage to regain some form in the back end of such a challenging season. The mood was contagious when Moses ran half the length of the field a couple of sets later, eluding Aitken before stretching out the football as if he was planning to kick it, deceiving Dufty enough in the process for him to speed past Macdonald and come to earth directly beneath the posts.

You could see all the frustrations of the 2018 season melt away as Moses got up from scoring in triumph, for what has to be one of the most memorable four-pointer of the season, even or especially as it was purely played for pride. With that kind of position, it was inevitable that young Mitchell would add the extras, and so the Eels found themselves with a 34-4 lead over the team that were initially touted as premiership favourites for the 2018 season.

The Dragons got a few chances over the rest of the second half, including a nice chip from Hunt that Dufty almost managed to offload before being tackled by Norman, but there was no doubt the the Eels had the game wrapped up. A final try from Siosaia Vave, and a difficult sideline conversion from Moses, brought the scoreline to a stunning 40-4. No matter how hard their season, then, the Eels can use this match to remind themselves of what they can do in 2019, making for eighty minutes that were every bit as inspiring as the Cowboys’ unlikely victory on Thursday night.