Both the Storm and the Sharks were coming off losses when they met at AAMI Park on Sunday evening. Cronulla had suffered a more devastating defeat – a one point loss to the Sea Eagles, as opposed to the Storm’s ten point loss to the Bunnies – but Melbourne were probably hungrier for the points, given that winning this match would reinstate them at the top of the ladder. It was a bit surprising, then, to see the Sharks dominate the opening of the game, culminating with the first try seven minutes in.

Josh Dugan put in a terrific effort to start, collecting the high ball under considerable pressure from Josh Ado-Carr before offloading to Luke Lewis while the Fox was still wrapped around his legs. Some well-timed pressure from Billy Slater forced Lewis to cough it up, but Holmes steadied things with some impressive dexterity at the end of the next set, when he caught a Cameron Smith kick right on the sideline, and momentarily popped into touch before returning to the field of play to regain possession. 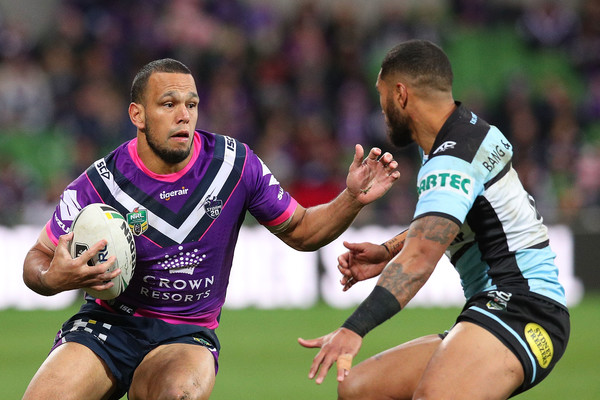 While Dugan might have made an error shortly after, Slater also lost the footy out of the subsequent scrum, handing it straight back to Cronulla, thanks to a two-pronged tackle from Matt Moylan and Wade Graham. Four tackles into the next set, Joe Stimson lost the ball on the back of a big hit-up from Paul Gallen, who made a quick tap shortly after, following a penalty for Nelson Asofa-Solomona for working on the ground. A dance along the ruck from Moylan now combined with a quick play-the-ball for Graham to send Jayden Brailey through a disheveled Melbourne defence for the first four points of the night.

Holmes quickly made it a six point lead, and the Sharks looked set to score again soon, with Lewis almost breaking through the line on the right edge on the second tackle of the restart. By contrast, Will Chambers kicked on the second tackle of the next Melbourne set, and with Slater surprised into being ahead of the football, Holmes was able to make some considerable headway with bringing the Steeden back up the field. 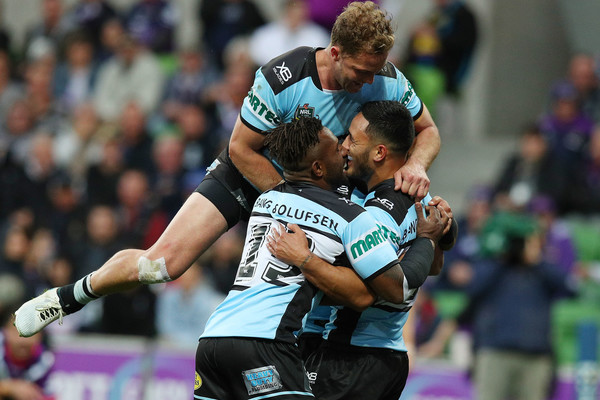 Thirteen minutes in and Melbourne had only had 35% of possession. With Jesse Bromwich losing a flat pass from Cameron Munster right on the line – after the Storm got some additional field position following an early tackle from Matt Prior – this was feeling less and less like a home fixture for the purple army. Chad Townsend now shone at both ends of the field, wrenching the footy away from Munster down the Cronulla end and then cleaning up Ado-Carr at the Melbourne end.

In order to reclaim some control over the game the Storm needed a show of strength, ideally from some of their bigger men. A couple of minutes later, Bromwich provided just that, sticking out his arm for a huge fend on Gallen that set the stage for a linebreak from Slater, who arrived at the ten metre line so quickly that when he grubbered it took Holmes utterly by surprise, as valiantly as the Cronulla fullback might have tried to contain the football.

For the first time in the game, the Storm had really disoriented the Cronulla defence, and Slater made the most of it, sending the ball to the left following a penalty after a flop from Townsend, and forcing the Sharks to cluster their defence on their right edge, before a wide pass from Smith sent the footy back to the centre just as quickly. From there, Slater took control again, sending an early ball to Chambers who got on the outside of Ricky Leutele before executing a superb flick pass to send Vunivalu over.

A missed conversion from Smith meant that the Storm were still two points behind. Over the last ten minutes of the game they came close to two more tries, either (or both) of which could easily have won them the match, given the final scoreline. The first started with a sublime linebreak from Ado-Carr, who collected the footy at the Storm end and then made his way sixty metres back upfield, dodging out of about ten tackles before the Sharks only just managed to contain him. 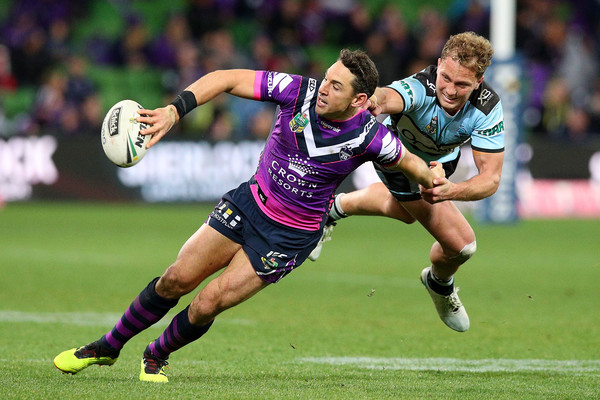 From there, a grubber from Slater should have sealed the deal, but it didn’t sit up well for Vunivalu, forcing something we rarely see from the big Melbourne winger – frustration. A couple of sets later, Slater provided another assist – this time, a harbour bridge pass that sent the Fox across on the left wing – but the try was called back due to a bit of a brainsnap from Curtis Scott, who leapt up in the air to get a hand to the Steeden just before it landed in Ado-Carr’s palms.

These two disappointing moments for Melbourne just seemed to galvanise the Sharks, who now consolidated for their most spectacular passage of play so far. It started with Moylan taking the football so far into the line that by the time Holmes collected it he pretty much was in the line, leading to a few boos from the crowd as he sent it across to Sosaia Feki for a pass that might have floated forward, but was – only just – backwards.

The Feki Factor now put in his best footwork of the season, skipping out of a huge tackle from Vunivalu and somehow coming to land, on one foot, a centimetre out from the sideline, before sending the Steeden across to Holmes, who caught it between Slater and Jahrome Hughes to plough over the chalk for another try. With Holmes adding the extras a moment later, it was a classy way for the Sharks to bring the first stanza to an end – and Townsend added the icing a moment later, booting through a field goal to put the Sharks at 13-4 with two minutes to go.

Still, things weren’t perfect for Cronulla as the siren rang out, as Townsend’s one-pointer coincided with Graham being taken off for a knee injury – a pretty serious situation given how crucial the Sharks’ left edge attack had been to their performance across the evening so far. This was a chink in the Cronulla armour, and the Storm needed to capitalise upon it as soon as possible in the second half, ideally by consolidating the team around one of their veteran playmakers.

That’s just what happened, as Slater scored a try four minutes in that was so rapid and dexterous that it happened before the Sharks had fully registered it – more like a sleight of hand than a set play. All that it took was a bit of left movement and a grubber from Munster – a grubber that seemed to have been kicked directly to Billy the Kid, so effortlessly did he curl around the defence to get it to ground.

Given that Slater had played a key role in both of the near-tries for the Storm that ended the first half, it was particularly galvanising to the home crowd to see him score himself, let alone in such an efficient and clinical way. For a moment, then, the purple army seemed to have regathered and regrouped, not least because the communication between Smith and Cronk, and the misdirection they set in place for the opposition, was the kind of mechanism they excelled at with Cooper Cronk. 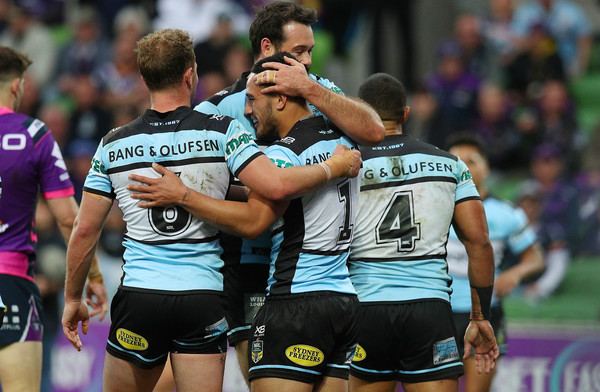 Nevertheless, the Storm gradually decelerated over the next twenty minutes, thanks to three more almost-tries that cumulatively sapped their energy and momentum. The first came twenty-five minutes in, when the Slater-Vunivalu situation was repeated, except that now it was Hughes who sent through the kick, and Slater who found the bounce not working in his favour. Shortly after, some rapid movement out to the left almost sent Scott over, only for some huge cover defence from Dugan, Townsend and Holmes to hold up the big Melbourne no. 4. 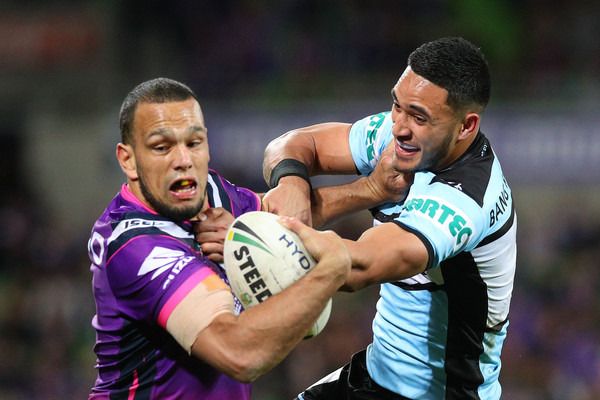 The best defensive moment of the night for Cronulla came shortly after, when Joe Stimson slammed through the line for what looked like a certain try, only for Holmes and Ramien to combine to somehow prevent the Steeden hitting the turf. In slow motion, you could see that Stimson had made two efforts – the first time, Ramien’s propulsion prevented him getting more than an elbow down, while the second time Holmes put in a mammoth effort to hold up Stimson’s hand while Ramien swung a leg around to bring the footy back up when it was a mere millimetre from the grass.

This could have been a momentum-killer for the Storm, but they still had possession, and chose to dig in and double down. An escorts penalty from Leutele, a second effort from Woods, and a strong run from Smith on the second tackle paved the way for a Hughes grubber, which forced Holmes to take it into touch. By all accounts, Melbourne should have scored on the dropout, but instead all their near-misses condensed to Ramien intercepting a pass from Munster, and then running eighty metres down the field before Ado-Carr finally grounded him just outside the ten.

In fact, Ramien busted out of the Fox’s tackle, only to look around, unsure of whether he was permitted to keep running, and then conceded the football when it turned out that he was, and that Ado-Carr was in position to wrap him up immediately. The Sharks didn’t lose any speed, however, with Dugan barnstorming his way through Scott, Chambers, Hughes and Ado-Carr on the next tackle to put down four more points for Cronulla.

It remained a three point game after Holmes missed the kick, although Smith wasn’t that much better with the boot, sending the footy out on the full for the restart. The Storm had to regather, and yet it was one of their oddest sets of the evening that led to the next and final try, as they went backwards sixty metres and then back up the field again, where a flick pass to Vunivalu saw the big winger score in the right corner of the field – a try he’d been raring to put down ever since his opening four points. 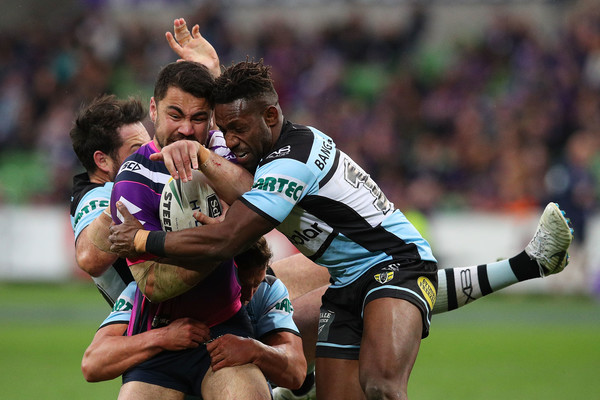 These would be the last points of the night, however, since Smith also botched the extras and the Sharks managed to keep out the Storm until the final siren rang. The purple army will therefore be looking for a decimating win over the Eels when they take them on next week, while Cronulla will be keen to coast on this momentum and rack up a similarly motivating victory over the Cowboys at Shark Park.