It was eight degrees and dropping in Canberra when the Roosters fronted up to take on the Raiders on Sunday afternoon. With rain setting in under a wintry sky fifteen minutes into the match, the home team seemed to sink right into the local conditions, with Ricky Stuart setting the tone by sitting, defiantly, on the sidelines, without a hood or beanie to protect his head against the impending cold. 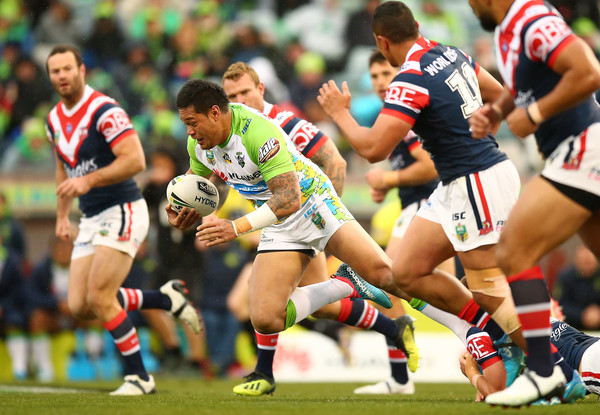 Sure enough, for the first stanza the Raiders ran rings around the Roosters, despite Sydney City not doing all that much wrong. They might have leaked more penalties than the green machine, but for the most part they completed sets and racked up repeat sets pretty well – it was just that Canberra seemed hungrier, especially in the middle third of the park, where they gave the Chooks their biggest defensive workout in weeks. 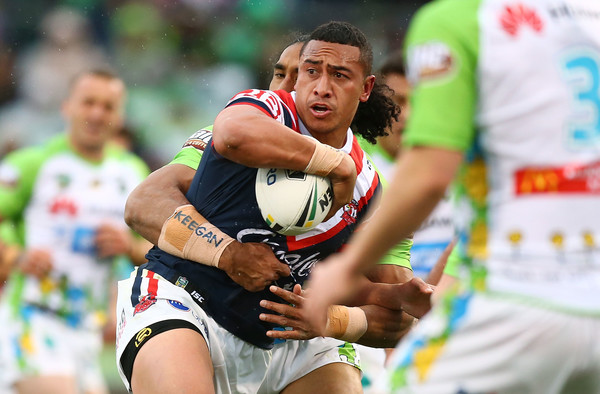 By the time they headed into the sheds, the top first half tryscorers would have been kept pointless by Canberra for only the second time since 1998 – an even more dramatic statistic in that this was also the fifth straight year in which the Tricolors have only met once with the Raiders in the course of a single season. An early kick from Austin set the scene, as Blake Ferguson chose to pop it into touch instead of catching it in the in goal area to gain the Chooks a seven tackle set. 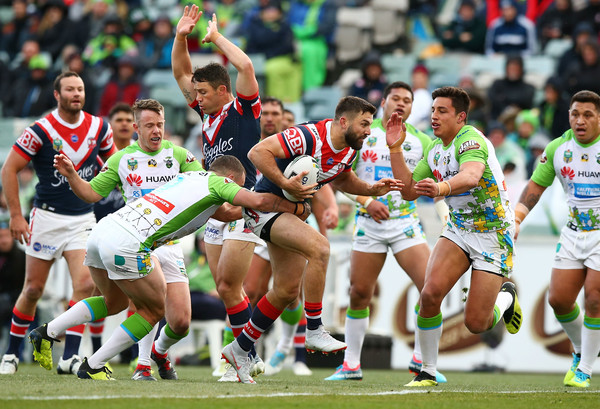 It was the biggest safety play of the year so far, and yet Fergo would have been better to take the risk, since it was only three tackles into the subsequent dropout that Brad Abbey orchestrated a stunning cut-out pass for Jordan Rapana to cross over on the right edge of the field despite James Tedesco’s best efforts to get to him. The Canberra winger has now scored five tries in five games, and with Sam Williams booting through the extras the Raiders were now a converted try in front. 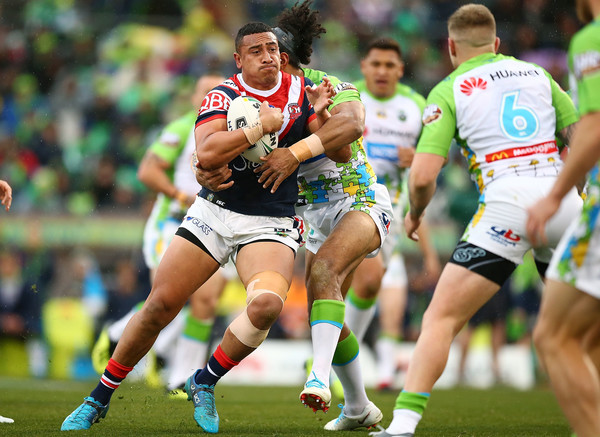 Over the next half hour, Canberra put in one big run after another, as the Roosters’ middle third struggled more than they have in weeks, sending ripples out through the rest of the team. In one particularly hair-raising moment, Fergo caught the footy on his back, fumbled it and regathered it – but only just – while Latrell Mitchell was nowhere to be seen after several of his best weeks on the football field.

With such a powerful effort from Canberra, the onus was on Cooper Cronk as the senior playmaker to step up and provide some guidance and, to his credit, the Melbourne veteran was behind most of the formations that saw Sydney City almost cross over during the second half of this opening stanza. A terrific kick shortly after Rapana’s try split the Canberra defence, and saw Abbey and Teddy going fullback on fullback to ensure the Chooks a much-needed dropout. 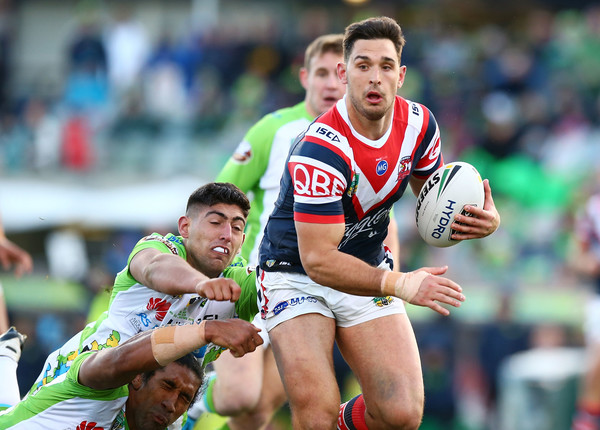 The next set had a few strong moments from the visitors, including Sio Siua Taukeiaho gathering the footy against his chest and slamming against the padding, but once again it was Cronk who focused things with another kick. At first, Rapana seemed to have cleaned it up, only for a tackle from Daniel Tupou to force him to pop it back, leaving the Steeden skittering on the grass where Joseph Tapine scrambled in to clean it up. 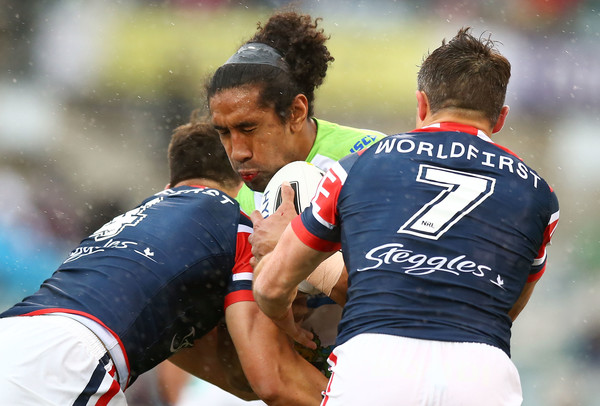 With a second dropout, Cronk had now done as much as he could, but an obstruction error from Boyd Cordner brought it all to a rude finish. The Raiders responded with one of their strongest sets of the night, concluding with a chip from Austin that, combined with the slippery field, saw Teddy slide back into the in-goal area and grant the Raiders another dropout. A few tackles later, the hosts got a penalty after Tedesco was called offside and chose to take a kick – a bit of a conservative decision given they’d scored their opening try off a dropout. 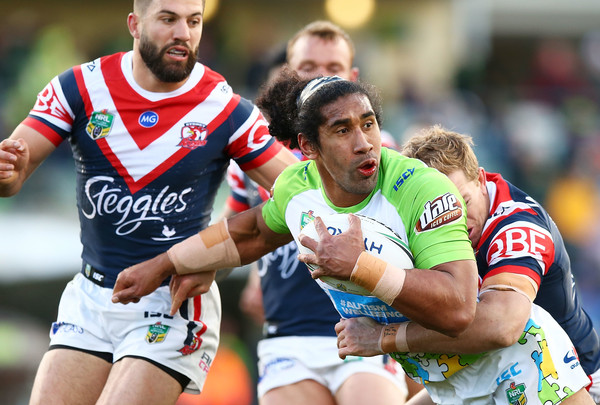 Still, a 10-0 lead was nothing to sneer at, since the best first-half pointscorers of 2018 were now looking at heading into the sheds without a single point to their name. Once again, Cronk forced another Rapana-Tupou clash on the wing, but this time Rapana popped the ball into touch himself, rather than relying on one of his big men to clean it up. Shortly after, Ryan Matterson broke through the line, and would have scored if he hadn’t slid to the ground, offloading the footy to Mitch Aubusson who coughed it up and allowed Austin to regain possession as seamlessly as possible. 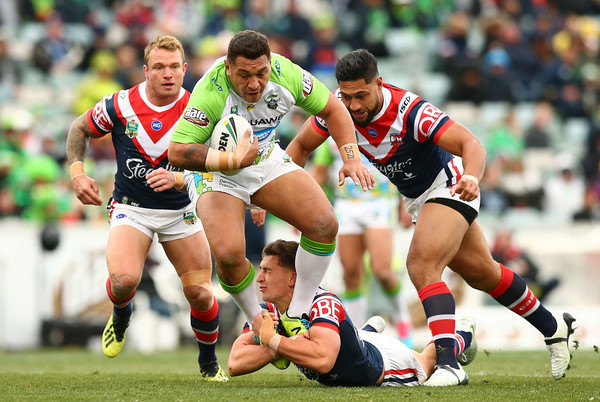 To make matters worse for Sydney City, Canberra got the ball again at the start of the next set – the penalty count was now 6-1 – after Fergo coughed up the footy right on the line. The Raiders didn’t capitalise as much as they might have done on this enormous shift in fortune, although a penalty on Cordner for lifting Luke Bateman above the horizontal saw the green machine clock up another penalty goal to bring them two converted tries ahead of the Chooks as the siren rang out. 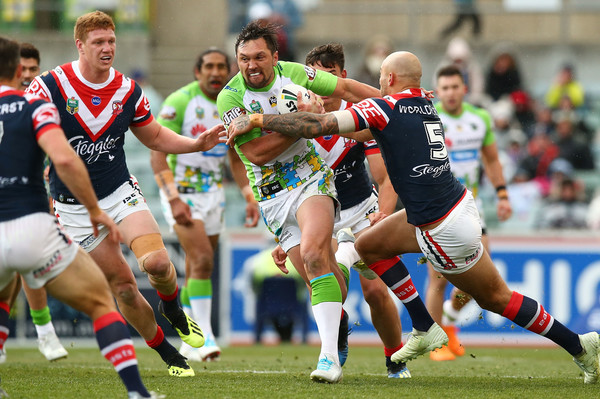 The Roosters had to score – and score fast – when they got back from the sheds. That’s just what they did, two and a half minutes in, when a double pump from Tedesco forced Williams to commit, opening up space for Cordner to crash over for a much-needed try for Sydney City. Meanwhile, Joey Leilua had kept too focused on Mitchell to contribute to the play, and with young Mitchell now adding the extras the score shifted to a more respectable 12-6. 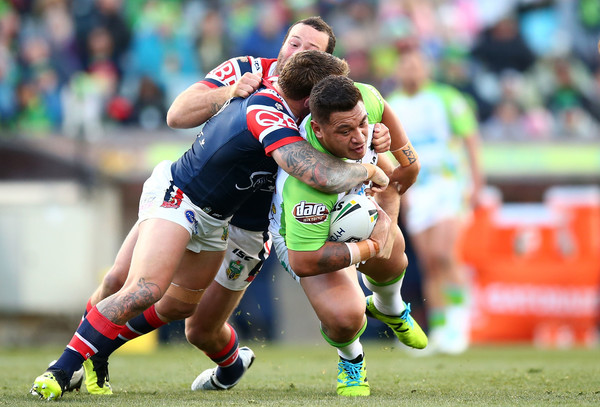 For a moment, it looked as if the Raiders had regained their lead, when Iosia Soliola put in a terrific run to chase down an Austin grubber and get it to ground in the last half metre before Ferguson was waiting for it to bounce into touch. The replay showed, however, that the big second-rower hadn’t been able to complete, fumbling the footy at the last moment for Fergo’s single biggest let-off of the year. 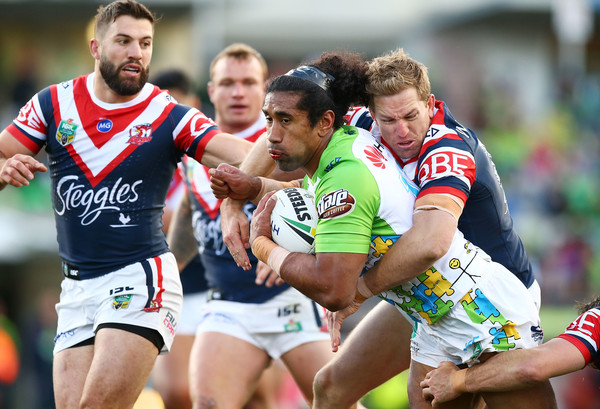 Finally, a few sets later, Mitchell got the chance for his first big run of the night, and the spectacle seemed to dishevel the Raiders, with Austin putting in the brainsnap of the match by kicking on the first tackle after a penalty on Nat Butcher got Canberra some much-needed field position. It was Victor Radley, though, who came up with the chocolates, running in to gather the ball from Jake Friend after a deceptive shift to the left and burrowing through three massive Canberra defenders from ten metres out to stretch out a hand and get the footy to ground. 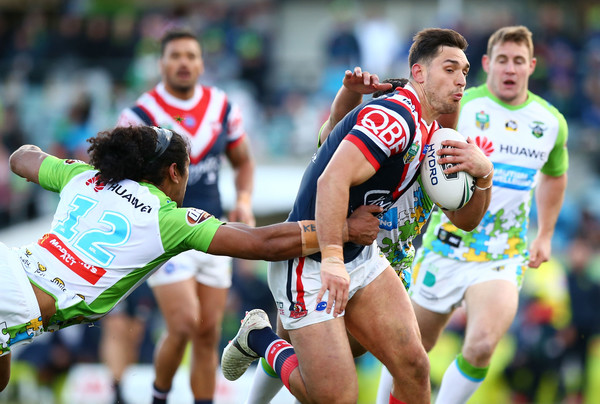 It was a fitting end to an amazing game from Radley, but a hand in the ruck from Jake Friend got the Raiders a penalty kick to bring them two ahead – the last two points to be scored over the course of the night. From here, it felt like one clutch play or heart-stopping error after another, from Havilii losing the footy on the first tackle of the next set, following an awkward pass from Williams, to Soliola tackling and dragging Manu into touch just as he was shaping up to score on the Roosters’ right edge.

If you had to bet, you’d probably say the odds were in Canberra’s favour over these final minutes, and yet the green machine have lost so many games this year in the dying minutes of the match that their lead felt even more precarious than a two-point advantage normally does. The final death knell for the Chooks only came a minute out from the siren, when Cordner coughed up the football, leaving the Raiders one more set to slowly and cautiously make their way back down the field.

In the single biggest upset of Round 23, then, the premiership favourites were beaten after five straight wins by a team outside the top eight with four straight losses, with Canberra only racking up a mere four errors over the course of the entire game. The Roosters will be looking to come back, and come back hard, then, when they take on the Broncos at home next week, in what promises to be one of the best matches of the second last round of the regular football season.