Lachlan Lewis might have been back for the Bulldogs for his birthday, but the Warriors dominated field position for the first part of their game against Canterbury-Bankstown on Sunday afternoon. The match started with two moments from Josh Jackson, the first of which involved him holding up Ken Maumalo in the in-goal area before Kerrod Holland ran in to secure the dropout, the second of which came just after, when a short dropout from New Zealand induced an escort penalty from the big Bulldogs second-rower.

Seeing Jackson’s form turn around so quickly seemed to empower New Zealand, who put in a beautiful sequence at the end of the next set. It started with a twisting one-armed offload on the ground from Adam Blair, followed by some deft footwork from Shaun Johnson to keep the ball in play after being forced over the sideline. A big kick from Issac Luke deflated it all with a seven-tackle set for the Dogs, but an forward pass from Hopoate to Holland got the Warriors the ball back almost immediately.

From there, New Zealand built upon Blair and Johnson’s efforts as if the last minute hadn’t happened, culminating with a repeat set of six after a Blake Green grubber ricocheted off Matt Frawley’s boot. All it took was a dexterous offload out the back from Roger Tuivasa-Sheck to Johnson to set up the first try, as Gerard Beale read the play perfectly to run a diagonal line and collect the Steeden from Johnson on the inside.

Johnson might have added the extras, but his kick was quickly eclipsed by three successive kicks that now determined the shape of the next part of the match. The first came from Lewis, who mistimed his contact and allowed Maumalo to catch the footy on the full in the in-goal area, gifting the visitors a seven tackle set. At the other end of the field, Green made good on that opportunity by showing Lewis how it was done, trapping Reimis Smith in the in-goal area for a New Zealand dropout.

In a final twist, however, the Dogs now proved that they were every bit as capable of regaining the football from the dropout, thanks to a low, skittering boot from Lewis that more than made up for his early misfire, catching Maumalo by surprise on the side of the field and getting Canterbury possession once again. Some great efforts on the left edge from the Morris twins laid the platform at the other end of the field, and when the footy moved back to the middle of the park, Lichaa sent it across to Lewis, who put in the best pass of the afternoon so far to send Adam Elliott across the line. 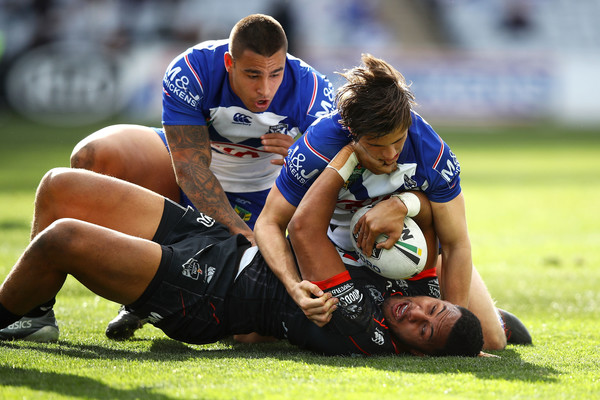 It wasn’t simply a matter of the big Tathra second-rower being in the right place at the right time, however, since Elliott was a good eight metres out from the chalk when he collected the Steeden from his five-eighth. There was more than enough time for the Warriors defence to clean him up, but somehow Elliott steamrolled through them, slamming over Isaah Papali’i for one of the massive one-on-one efforts that would characterize the game as a whole. 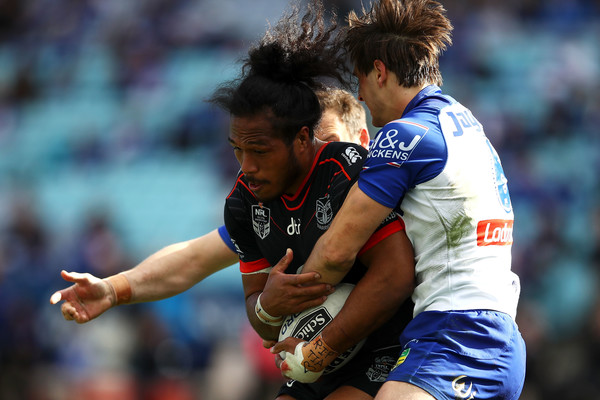 The move looked even better in slow motion, where it emerged that Elliott had been tackled around the waist and brought down about five from the line, only to slam down and reach out a hand to get the footy to ground. It was a superhuman effort, so no surprise that Elliott looked pumped when he got up from the grass, in one of the most hard-won efforts of the back end of the Canterbury-Bankstown season. 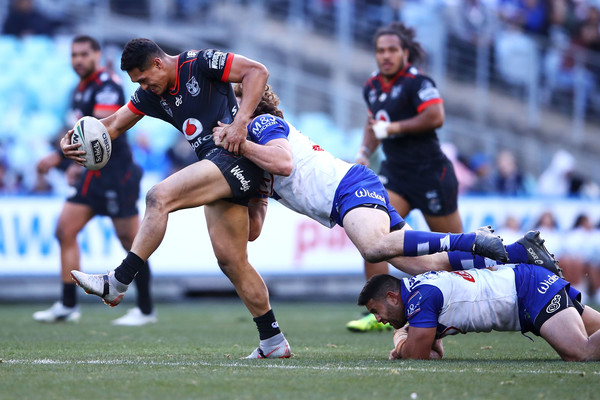 Seeing Elliott demystify the Warriors’ defensive line in this way seemed to give the Dogs a bit more confidence in experimenting right on the line. Combined with their increased flexibility in these last few matches – the flexibility of a team with no finals prospects to play for – that produced one of the most irreverent and provocative tries of Round 23, on the back of a quick play-the-ball from David Klemmer a metre out from the chalk.

Collecting the Steeden from Klemmer, Lichaa moved back and looked around as if to widen the play, only to take a chance on sending a short ball to Reimis Smith, who made up for his dropout twenty minutes before by slamming through Simon Mannering much as Elliott had tramped over Papali’i, in yet another decimation of the New Zealand defensive unit. With Martin adding the extras as reliably as ever – he’s now sitting around 98% – the Bulldogs were a converted try ahead, forcing the Warriors to dig deep as the half-time siren loomed.

A pair of penalties gave them the opportunity they needed – the first on Frawley, for a slow peel and the second on Klemmer for being offside. With that surge in momentum, the New Zealand spine consolidated, as Luke sent the ball through Mannering and Johnson, before Papali’i rivalled Blair’s brilliant offload from earlier in the match by getting the football across to RTS to score in the corner, a nice moment given the assistance RTS had provided up through the ruck so far.

With Johnson adding the extras, the two teams were now level, although a penalty goal saw Martin gain the Dogs a two point lead as they got ready to head into the sheds. All of a sudden, a great pass from Jackson saw Holland break through the line and race up the right edge of the field, before sending the footy across to Hoppa, who drew in RTS and waited until the last minute before sending a one-handed pass back on the inside to crash under the posts for his first NRL try. 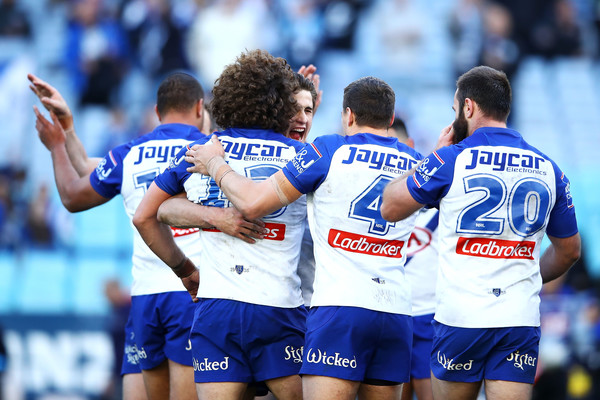 In three minutes, Canterbury had gone from a level playing field to an eight point lead, once Martin added the extras, and yet it wasn’t just the fact of this closing try but the way it was scored that added fuel to their fire. Seeing Hoppa and Lewis, the veteran and the young gun, in combination must have been galvanising, while a hard week in the news for the Hopoate family, and some frustrating decisions earlier in the game for Lewis, made this linkup especially cathartic and climactic.

Sure, enough, the Dogs returned to the field even more motivated than in the opening stanza, looking nothing like a wooden spoon team as they ground down the Warriors, who seemed more and more exhausted with each passing set. Nevertheless, New Zealand were the next to score, thanks to a penalty on Martin for a second effort and, perhaps more critically, a handling error from Hopoate, who cleaned up the footy at the end of the subsequent Warriors set only to lose it under the pressure of a tackle from RTS immediately after getting back into the field of play.

The Warriors now had their first back-to-back set of the second half, and the sustained possession that had reaped rewards earlier in the game. A tackle later, Mannering sent the footy through Johnson and Beale for Fusitua to score in the corner with a typically spectacular gymnastic display. While he’s scored lots of tries in 2018 with his foot in the air, this was one of the most complex and contorted, as the big winger twisted his left foot around to the right as he ground the Steeden with his right hand.

Full credit has to go to all of the previous playmakers as well – Mannering for sensing the space and position that could open out on the right edge, Johnson for running up into and confounding the Canterbury defensive line, and Beale for just doing his job and not attempting anything fancy as he got the footy across to Fusitua. It was a sequence of one-on-one efforts in which New Zealand got the best of the Dogs at every moment, reversing the momentum that the hosts had started to build in the wake of Lewis’ four points.

It felt doubly motivating for the Dogs, then, when Lewis facilitated the next try, gathering the footy and seemingly waiting an age before booting it over to the left corner, where Brett Morris tapped it back for brother Josh to crash over. Nothing congeals Canterbury quite like the spectacle of the Morris twins linking up, and in this case they seemed to be sequestered from the rest of the field, thanks in part to the leisurely timing that Lewis had taken with his kick, a sure sign of the greatness he’ll bring to the footy field in years to come.

Both teams were now starting to ramp things up, and Issac Luke responded with a linebreak and offload to Jazz Tevaga, followed by a shift in play to the Warriors’ right edge, where a double pump and harbor bridge pass from Johnson sent Fusitua over for his second try of the afternoon, bringing him one away from Valentine Holmes’ current standing as the NRL’s top tryscorer of 2018.

One of the most convulsive periods of the game now followed. Whether it was Maumalo pushing Jackson out of the way under the high ball, another handling error from Hoppa, a momentary lapse after an injury to Johnson, or an error from Tevaga under a tackle from Klemmer, both teams seemed aware that the next four points had the ability to make or break the game for them.

For a while, it seemed as if the Dogs were gaining the upper hand, not by virtue of field position or possession, but as a result of their tireless defence through one New Zealand onslaught after another. One especially powerful defensive set ended with Frawley catching the footy in the in goal area and gaining his side a seven tackle set. At the other end of the field, the blue and white army were in great position for a field goal, but Lewis instead opted for a crossfield kick to the right edge, where Smith was penalised for tackling RTS in the air.

With that opportunity wasted, the Warriors started to regather, and a couple of sets later Blair found a gap in the defence right on the line and stormed through, slipping past Lewis and forcing Hopoate and Elliott to come in for a desperate tackle to keep him from scoring. They succeeded, but not without Blair offloading to Petu Hiku just as he was hitting the turf, allowing the ex-Warrington Wolf to slam over the line for four more points, bringing it to a level score once Johnson had added the extras.

What followed was the stuff of legend, as Lewis made up for not kicking for a field goal by putting in the most spectacular field goal of the year – a huge boot that hung in the air for about five seconds before actually clearing the top of the uprights, suffused with the same leisurely sense of assurance that had characterized Lewis’ game. Still, this was a desperate, hard-won effort by the Dogs, epitomized by Holland chucking away RTS’ boot when it came off earlier in the match – a no-holds-barred contest that they’ll be keen to draw on when they take on the Dragons next Sunday.

Meanwhile, this was a major upset for the Warriors, especially given their form in the first half of the match. They’ll be looking for an emphatic home win over the Panthers, then, when they take them on at Mt. Smart Stadium, for the second match in what promises to be a terrific round of footy given some of the results to have come out of Round 23.