The Panthers rocked up at Mt. Smart Stadium on Friday night desperate to come back from their disastrous home loss against the Knights the week before. Demoted from the top four, they needed a decisive victory to regain their momentum as finals footy approaches, while New Zealand were just as keen for a win to cement their position in the top eight. The Mt. Smart home advantage can be strong, and the Warriors tapped into it brilliantly over the first half, dominating possession and game play.

It was forty minutes that Reagan Campbell-Gillard would like to forget, since the big Penrith prop seemed to have a hand in virtually every point that New Zealand put down. An early tackle from RCG got Shaun Johnson the first points with a penalty kick, while Agnatius Paasi took the Penrith no. 10 by surprise with a show-and-go after a quick play-the-ball from Issac Luke, crashing down beside the posts for the first four points of the night.

Ten minutes in, and Penrith finally got their first touch of the football, after having already leaked three penalties. A strip on Isaah Yeoh got them some much needed field position, while a trademark kick from Nathan Cleary got the mountain men a dropout, only for the Warriors to go short and get the footy back immediately, despite some courageous efforts from the young Penrith halfback to contest it.

At the other end of the field, Johnson put in his best kick of the night so far, leading to a complex sequence right on the line that saw Adam Blair get it to ground with one-hand, before the replay showed that a push on Cleary meant that this couldn’t be four more points for New Zealand. It was a massive let-off for the Pantehrs, especially since a sequence of penalties now got them their first really sustained field position of the evening as the twenty minute mark approached.

After three sets on the Warriors’ line, Cleary almost smashed through. A tackle later, Viliame Kikau grubbered and Waqa Blake slid to ground right in front of the Steeden, in what looked set to be a climactic and cathartic end to so much field position and possession. It was utterly deflating for the Panthers, then, when Blake knocked it on, crowning New Zealand’s outstanding opening possession with their best three defensive sets of the evening. 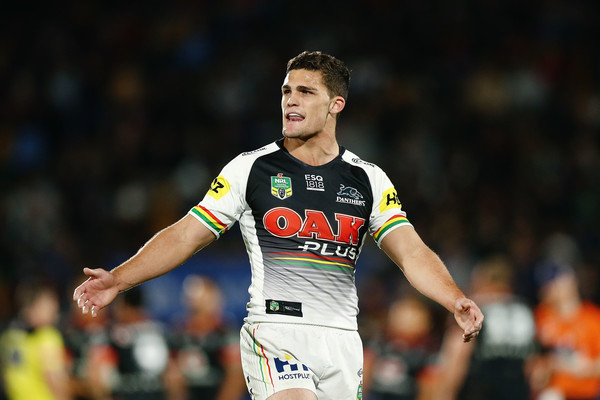 A strip from RCG got the Warriors the platform for their next points, and while it may have been an unlucky call, it made up for the call that Yeo had been stripped earlier in the game, since you could have made a case for a loose carry in both situations. At the other end of the field, some silky handling from Peta Hiku set up Simon Mannering and Shaun Johnson for a pair of catch-and-passes so smooth and seamless that looked as if the ball was simply bouncing along the top of the Warriors line.

It ended with a one-handed putdown from David Fusitua on the right edge, bringing him even closer to being the third Warriors to score twenty tries in a single season. With Johnson’s kick coming off the uprights, New Zealand were only twelve points ahead, but a huge run and kick from Fusitua shortly after set the scene for another try. To his credit, Cleary put in an equally impressive run to clean up the footy right in front of the posts, but a penalty on Tyrone Peachey for holding back meant that the Warriors got the football once again. 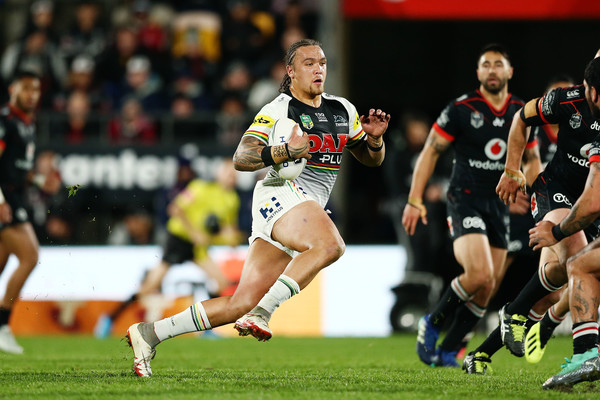 Once again, too, RCG was the casualty on the next set, thanks to some deft work from Mason Lino, who sent the footy over to Mannering, and then scooted around to collect the offload, before ducking out of a tackle from Campbell-Gillard and crash to ground beneath the posts. This time, Johnson’s boot did the trick, and the Warriors were looking at a 18-0 scoreline as the half time siren loomed. 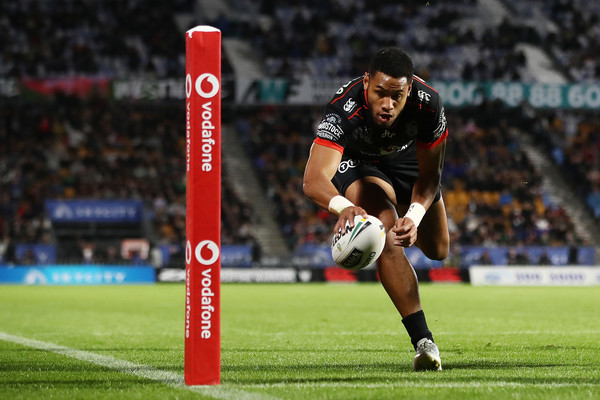 They’d reckoned without Mansour, however, who made the most of a lucky bounce off a left edge Waqa Blake kick by scooping up the footy and getting it to ground with two minutes left on the clock. No doubt, it was a fortunate moment for the mountain men, but a less assured player could easily have got tangled up with the footy as it ricocheted off his legs, imbuing Sauce’s dexterity with just the calmness and focus the Panthers needed to steady themselves as they headed into the sheds.

The Warriors just kept on going when they came back, however, with Fusitua getting his twentieth try of the year two minutes in to beat Valentine Holmes for most tries of the 2018 NRL season so far. It started with a kick bomb from Lino, who got the ball back again after Kikau knocked it backwards and Blair regained possession to send it back to his halfback.

Johnson now stepped into the halves equation, collecting the footy from Lino and dummying a couple of times to give the Warriors’ right edge to consolidate. From there, it was almost inevitable that the ball would make its way to the corner as seamlessly as it had for Fusitua’s first try, and with Johnson steering through the conversion New Zealand were now twenty points ahead of the visitors.

It was a stunning testimony to the power of the Warriors’ halves combination under pressure, and if New Zealand were to win the premiership in 2018 this would surely be one of the games, and one of the moments, that critics would look back to when tracing their late season consolidation. Shortly after, James Tamou seemed to have responded with a linebreak, but an obstruction penalty from James Fisher-Harris deflated his momentum as soon as it had begun.

Nevertheless, the Panthers shortly enjoyed their best period of sustained field position since the opening half, thanks to a succession of penalties from Johnson, Kata and Luke. The first time around, the Warriors had used this situation to showcase their defensive aptitude, so it was paramount that the mountain men were able to come away with points after so much time spent on the New Zealand line.

When Roger Tuivasa-Sheck cleaned up the final Penrith kick, then, it was hard to believe that Penrith had any chance of winning this match, save with one of the magnificent comebacks that characterized their trio of games a week ago. More than any point in the last month, the loss of James Maloney’s ability to garner dropouts and enact creative last-tackle options felt really damaging, with even Cleary’s boot coming up short against such a staunch New Zealand defence.

On the other side of the Steeden, Johnson now showed what he can do when he has a chance to run the ball, breaking through the line and nearly getting over the chalk himself, before lobbing the footy to Fusitua to slam down his second hat trick of the season after scoring three against Manly in Round 14. Running straight over Corey Harawira-Naera, the big winger’s body language said everything about the Warriors’ dominance, and while Johnson may have missed the conversion a penalty goal a couple of sets later brought the scoreline to 30-4.

After so many tries on the right edge, the Warriors’ left edge was the next to shine, thanks to a series of perfectly timed passes followed by a strong hard putdown from Kata, who got on the outside of Peachey to bring New Zealand to 36-4 once Johnson had booted through the extras once again. It was the same scoreline that the Panthers had enjoyed when they took on the Warriors seven weeks ago – a sixty-four point turnaround that made it a point of pride for Penrith to be the next to score.

They were, too, thanks to a terrific pair of offloads that took back some ownership of the second phase play that had formed such a key part of the New Zealand attack. The first came from RCG, in an important counterpoint to the role he’d played in letting through or laying the platform for the first couple of Warriors tries. The second came from Merrin, who popped the ball out while being tackled by Johnson and Hiku, setting up Blake to utterly monster RTS on his way to the left corner.

Merrin turned from try assister to try scored on the next set, busting his way right on the line to notch up four points of his own. They were the last of the night, since while a deft offload from Kikau might have allowed Mansour to glimpse some space up the left edge it was contained, as so many of the Panthers’ attacking formations had been contained, by the steely Warriors defence.

The Panthers now have a big task on their hands in terms of morale when it comes to the last week of the regular footy season, especially in the absence of a coach who was sacked when they were comfortably within the top four. Meanwhile, the Warriors are looking for an equally emphatic victory when they take on the Raiders at Mt. Smart ahead again next week as a precursor for the start os finals football.