A twenty-point loss from the Rabbitohs to the Broncos, and a shock win from the Raiders over the Roosters, made Saturday afternoon’s match at GIO Stadium a bit more of an uncertain prospect than the position of South Sydney and Canberra on the ladder would suggest. Last time they met in Gosford, Greg Inglis put in one of the breakway tries of the 2018 season to help bring his team to a 42-22 win, so the return of G.I. in this match more than compensated for the green machine’s home advantage.

That said, the Raiders made the first big statement of the afternoon, after an Adam Reynolds bomb hit the side of his boot and careened off crossfield without making any significant metres. Taking advantage of the misfire, Blake Austin scooped up the Steeden and put in a massive run, slipping out of a tackle from Campbell Graham and momentarily looking as if he might beat Angus Crichton too, only to be brought to ground ten minutes out from the chalk.

An offside penalty from George Burgess saw Canberra tap and go for another set, but with Sam Williams fumbling the ball on the second tackle the momentum shifted the other way. All of a sudden, the ball was back up the other end of the park, where Hymel Hunt put in a couple of tackle busts on the left edge to almost sent John Sutton over. With the Bunnies racking up a penalty, Inglis got straight back into the leadership game, barking out instructions as the hosts sent the ball back to the middle.

Whatever his advice was, it worked, since a terrific linkup from Damien Cook and Adam Reynolds now saw Cody Walker crash over for the first try of the night. For a moment it looked as if Cook might get the chocolates, nosing around the ruck so rapidly that he seemed destined to break through, only for him to lob the footy back to Reyno at the most unexpected moment. At the other end of the play, Walker showed the same creativity and curiosity, catching the Steeden at speed and then finding an opening to clock up four points. 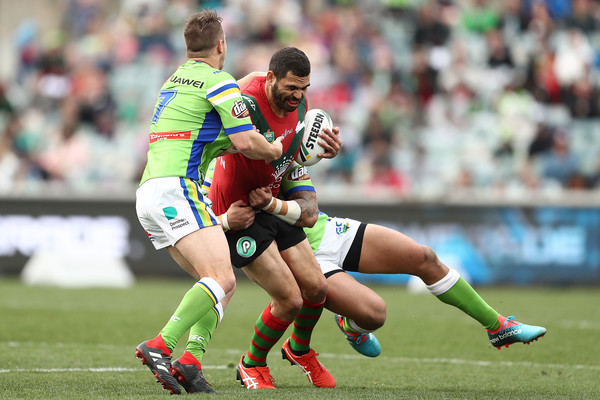 The Raiders regathered with a sustained period of field position, but another handling error – this time a fumble from Brad Abbey at the back of a Josh Hodgson pass – saw Dane Gagai respond to Austin’s opening run, dodging his way out of a seemingly endless series of near-tackles to ferry the football halfway up the field. Walker now went from try scorer to try assister, setting up G.I. for the second try of the afternoon, with a penalty goal shortly after bringing the Bunnies to a twelve point lead.

The spectacle of Inglis kicking the football jubilantly into the crowd said everything about the power of his four points to focus and galvanise his team mates, who have missed his leadership as much as his skill over the last couple of weeks. Yet Canberra now responded with another sustained period of field position, thanks to successive penalties from Tom Burgess, G.I. and Sam Burgess, as well as some good vision from Austin to get the Raiders organized. 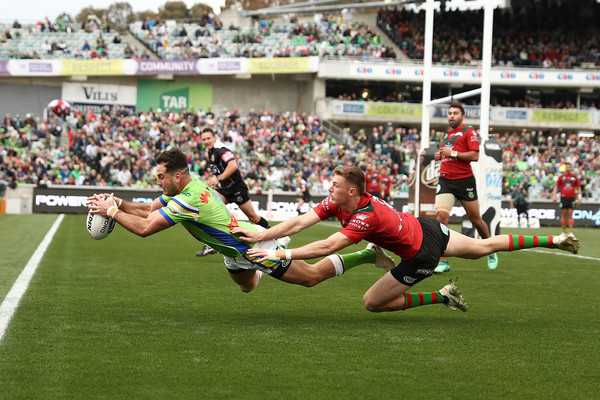 This time, Canberra made more of their possession, thanks to a brilliantly placed kick from Hodgson and a heroic ten-metre sprint from Michael Oldfield, who never gave up on the play but chased it down and grounded it right before the dead ball line, beating both Graham and Gagai in the process. The green machine got several more chances over the next couple of sets, but with Williams skicking straight into Walker the Bunnies started to regain the game, despite a terrific one-on-one strip from Soliola. 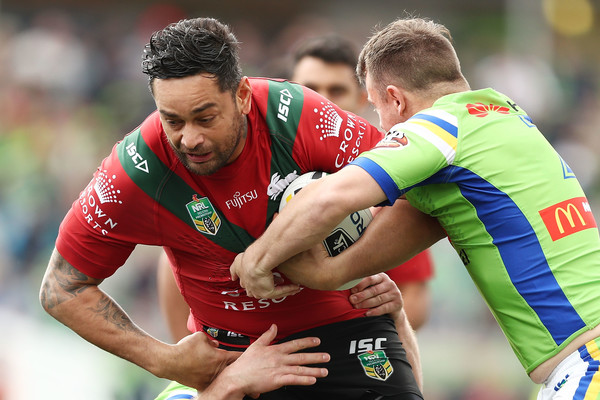 A bit of solid defence ten minutes out from the siren said it all, as Rapana caught the footy on the full right on the line, got out of the South Sydney jerseys reaching for it, and then lobbed it back to Leilua, only for Inglis to slam in and just prevent Joey getting to ground. It was an enormous couple of defensive plays, and spoke volumes about the Bunnies’ conviction at this point, as well as the competitive energy that Inglis had re-injected into the team.

For a moment, it looked as if a big cut-out ball from Williams to Cotric was going to set up a second try for the Raiders before the break, but as Soliola gathered the footy and jogged over the line the play was called back for a forward pass. A knock-on from Brad Abbey at the start of the back forty seemed to continue the Raiders’ gradual devolution away from that brilliant first try, but this turned out to be a turning-point in a different way, as Jason Clark lost the footy on the first tackle of the dropout.

By the second tackle, the Raiders were up to the Rabbitohs’ thirty, and while Murray might have cleaned up a Hodgson grubber right on the line, this was the start of a pretty frustrating period for the cardinal an myrtle. First it was an error from Reynolds and then a professional foul that saw Clark sent to the bin for ten minutes, depleting the Bunnies enough for Oldfield to cross over on the left edge for a double a couple of tackles later, thanks in part to a good decoy run from Soliola to bring in Crichton. 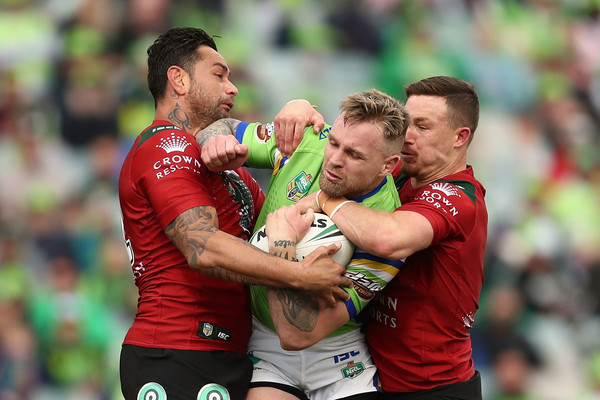 Things were starting to look a bit worrying for South Sydney, especially with Abbey almost pulling off the one-handed putdown of the year right on the dead ball line, so they were pretty fortunate to still be two points ahead when Clark trotted back on to the park eighteen minutes out from the siren. Still, things were wobbly, with a massive kick from Austin defying Walker in the in goal area, and forcing Campbell to come in and quickly clean it up, as both teams seemed to sense that the next try might just be the match-winner. 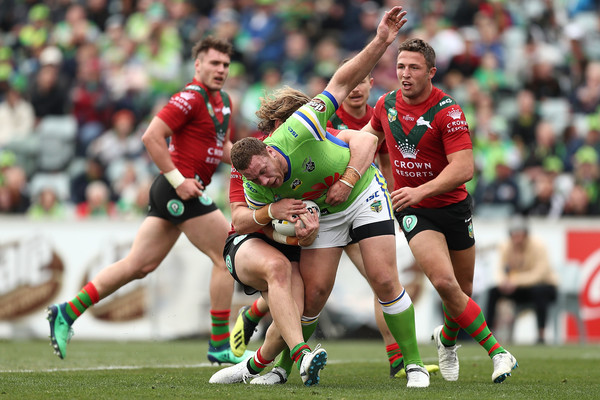 It came quicker than anyone might have expected, thanks to a pair of brilliant passes from the Raiders attack – a wide ball from Hodgson to Austin on the left edge, followed by a double pump from Austin that got the Bunnies right edge interested in the wing, but which Austin now followed with a short ball to send Soliola across the line. From his one-on-one strip, to his decoy run ,to his near-try after the pass from Williams to Cotric, Soliola had been all over the park during this game, so there was something decisive about seeing him clock up a try – a sense that the Raiders would be the next to score as well.

So they were, too, and off the back of one of the most promising South Sydney surges of the second half. Scooping up a kick from Cook about a third of the way up the field, Walker surged forward before sending the footy across to George Burgess, who got it across to Reynolds in turn, only for his halfback to come up with an error at the worst possible time. Moments later, Soliola responded with an equally good run, and managed to gain six again, but it only took a tackle for Cotric to slide past Johnston and crash over to put the Raiders ten ahead once Williams had converted.

Seeing such a promising South Sydney surge give way to six more Canberra points seemed to deflate the Bunnies, and with Inglis starting to show some signs of strain the game was firmly in the Raiders’ pockets. No more tries would be scored, and while this had marked G.I.’s return to the field, it also ended up as a terrific tribute to Austin’s organizational ability for his last home game before he heads to Warrington.

It’s bittersweet to see the Raiders playing such great finals footy now that they’re precluded from progressing beyond Round 25, but they’ll still be looking to keep up the momentum when they take on the Warriors for their last game of the season in New Zealand next week. On the other side of the Steeden, the Bunnies need a decisive win when they take on the Tigers at ANZ Stadium, for what promises to be even more dramatic match than Robbie Farah’s first fixture against South Sydney in black and gold.