It might have been a slow start for the Sharks, but they eventually coasted to a 26-point lead over the Knights for the second last week of regular football. Without Kalyn Ponga and Matt Moylan on the field, both sides felt a bit apprehensive, resulting in a fairly messy opening thirty minutes of football, with so many lost balls and strips that it felt as if were watching a wet weather match, rather than a breezy afternoon at Shark Park. 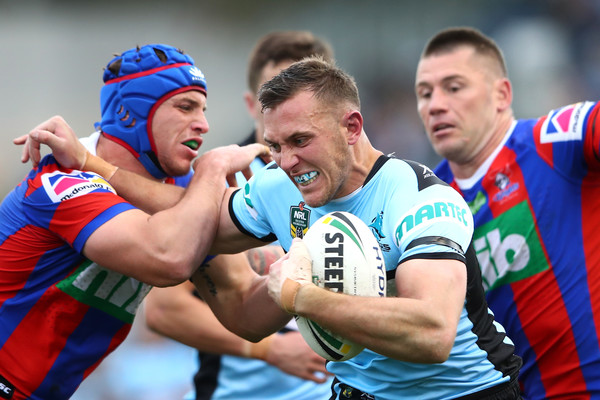 The game started dramatically, with Kyle Flanagan making his first statement with a dangerous tackle on Shaun Kenny-Dowall. The ex-Rooster wasn’t impressed, lobbing the football at Flanno Jr’s head, but when the Knights failing to find touch on the next kick, all that energy went to waste. They made up for it when Danny Levi prevented Jayden Brailey scoring off the back of a Valentine Holmes linebreak eight minutes in, but it came at the expense of a penalty for holding the Cronulla hooker back.

A few minutes earlier, the Sharks had chosen to tap and go from right in front, but they took the conservative option now, as Holmes booted through the first two points of the match from twenty-five metres out. Yet the ball just seemed to get slipperier from here on in, starting with an offload from Andrew Fifita that Flanagan knocked on at the worst possible time. 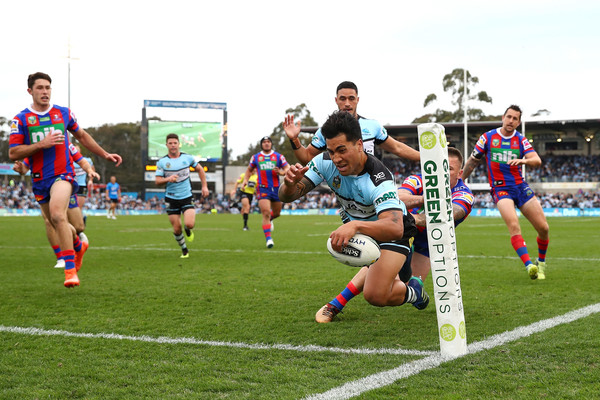 The Knights had a chance to score with two-last tackle opportunities, but both times Cronulla came away on top. The first time, Newcastle ferried the ball across to the right edge, only for Kurt Capewell to put some pressure on Sione Mata’utia and force him to lose it into touch. Yet with Chad Townsend losing the footy on the next tackle the Knights got another chance and, once again, they got the ball back on the last, as  a Mitchell Pearce grubber ricocheted off the defence, only for Edrick Lee to clean things up, for the start of what would be an epic afternoon for the future Knight.

Still, the Sharks couldn’t consolidate, with a kick out from the full from Wade Graham culminating a period of uncharacteristic messiness from the home team. As it turned out, however, the Knights were messier, and an incorrect play-the-ball from Danny Levi at the twenty minute mark gave Cronulla the platform they needed to focus their momentum. With Nick Meaney not square at marker, they got their chance, as Flanagan ran the football and the offloaded to Townsend just as he was hitting the turf.

From there, Townsend sent a massive harbour bridge pass across to the right edge, where Josh Dugan outleapt Ken Sio to catch it on the full, before curving around for a one-handed putdown right behind the posts. The Sharks might have started late, but they’d started with elegance, as Holmes slotted through the extras as seamlessly as if he’d been first kicker all year. Meanwhile, Josh King and Lachlan Fitzgibbon had suffered a grisly head clash as they converged on Flanagan, giving the Sharks a bit of time to catch their breath as Fitzgibbon was examined and then stretchered from the field.

Yet this also gave the Knights some time to regather as well. While the Sharks might have continued to build over the next few minutes – Sosaia Feki put in a particularly epic effort to get into the field of play and avoid being dragged over the sideline at the back of a Newcastle set – the visitors were also starting to develop some momentum as well. Shortly after, Mata’utia got his revenge for Capewell’s tackle with the hit-up of the night on Graham, and that burst of energy saw Newcastle storm through to their first try shortly afterwards.

All it took was a last-tackle grubber from Pearce, which bounced off Fifita in just the right way for Meaney to slam forward and get it to ground. No doubt, there was a bit of luck in it, especially since the replay suggested that the stand-in Newcastle fullback might have lost possession just before he hit the turf. Nevertheless, after the Knights’ failure to capitalise on Pearce’s last-tackle options earlier in the match, this felt like a redemption, especially once Sio sent the footy through the posts.

The Knights’ momentum took a big hit, however, when Connor Watson was sent to the bin about seven minutes out from the siren – not just because of the pressure of having a man off the field, but because the string of errors meant that it was only a matter of time before one of the teams found themselves committing a penalty too many. The fact that Newcastle copped the brunt of an error-prone game seemed to give the Sharks the advantage in these dying minutes of the opening stanza.

No surprise, then, that they took this moment to score one of their most spectacular tries of the night. It started with a superb offload and runaround from Fifita, followed by a barnstorming run from Capewell across the front of the ruck that saw him bust out of a massive Newcastle tackle before coming to ground on the right edge of the field. From there, Luke Lewis pulled in the defensive line, allowing Townsend to get the Steeden across to Lee, who crossed untouched on the right corner. 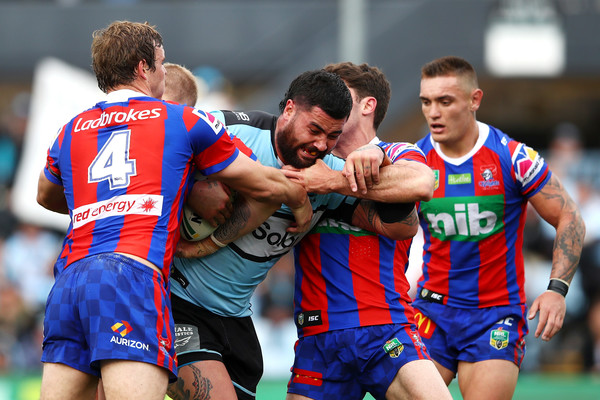 Like a condensed and compressed version of Dugan’s earlier try, this was the perfect conclusion to a first half of football in which so much had turned on Lee, who seemed determined to treat this as a job interview a much as a footy game, proving his worth to his future club in the most dramatic way possible. Things didn’t get any better for the Knights after the break either, as a comedy of errors saw Watson handed the no. 13 jumper (Mitch Barnett’s number) instead of the no. 12 as he prepared to trot back out to the park.

While the Sharks might have only scored one try during Watson’s absence, they scored their next try immediately after his return, thanks to Flanagan and Townsend’s best halves pairing of the afternoon so far. Both ran deep into the Newcastle line before sending the football across to the left, meaning that by the time it arrived at Holmes he was able to get on the outside of the red and blue defence to pop the Steeden across to Feki to place it down on the corner. 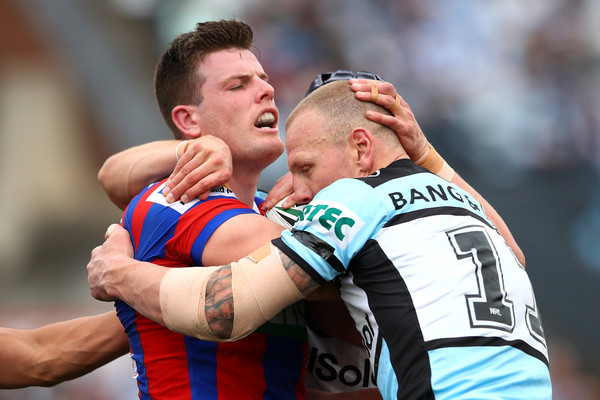 It was all the Feki factor from there, as the Cronulla winger managed to defy SKD, leap through the air and ground the Steeden all in the same elegant motion. This time, Holmes didn’t manage to boot through the extras, but the Sharks were still triple the Knights at 18-6. To make matters worse for Newcastle, a groin injury meant that Watson was off almost as soon as he returned – replaced by Jamie Buhrer – while an offload from Fifita and a linebreak from Flanagan made it clear that Cronulla were raring to score again as soon as possible. 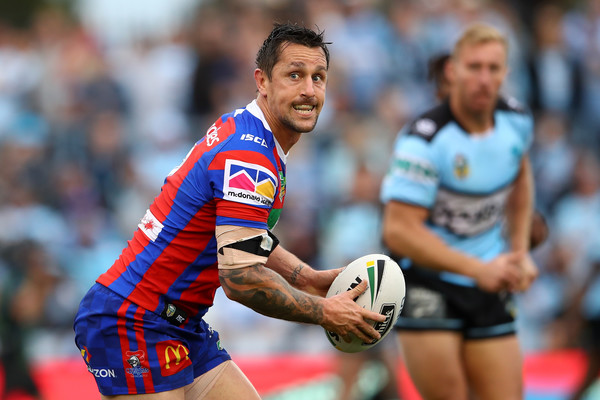 So much momentum had the Sharks managed to accumulate over the previous fifteen minutes that it felt as one more try would lead to a cascade of points that would effectively shut the Knights out from any hope of the win. To have a chance, Newcastle had to score next, and that’s just what they did, with Sio getting some good metres out of dummy half, laying the foundation for a silky sequence of passes from Pearce, Heighington, Yates and King that sent Daniel Saifiti beneath the posts untouched.

Once again, the Knights had a bit of luck, since some of those passes were arguably forward, but they were still twelve points behind the Sharks, who didn’t show any sign of flagging over the next couple of minutes. In fact, Cronulla stole any momentum that Newcastle might have generated on the restart, laying down their next try a three minutes later to neutralise any hope that the red and blue army had started to glimpse.

It started with a chargedown from Graham that saw the Steeden richochet off his torso just as Pearce was booting it out for a crossfield bomb. Three tackles later, Holmes broke through the line to cross over beneath the posts for the single most resonant Cronulla try of the night, and the first moment where their victory really felt assured. Not only did it mirror Saifiti crossing over untouched, but it occurred even more spectacularly, as Holmes showcased his ability to pivot at high speed as eloquently as at any point over the last twelve months. 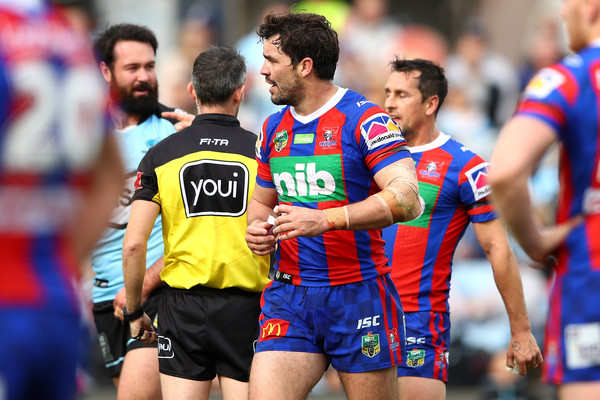 To make things even more momentous, Holmes now became the first Cronulla player to ever score more than twenty points in a single season, exceeding his own record of 19 tries in 2016, which has been shared only by David Peachey in 1999. Another chargedown on a Pearce kick was a good follow-up for Cronulla, only for both teams to sink back into the messiness of the opening minutes, with Holmes and Lee both losing the footy, and Mata’utia getting pinged for a forward play-the-ball under some pressure from Prior. 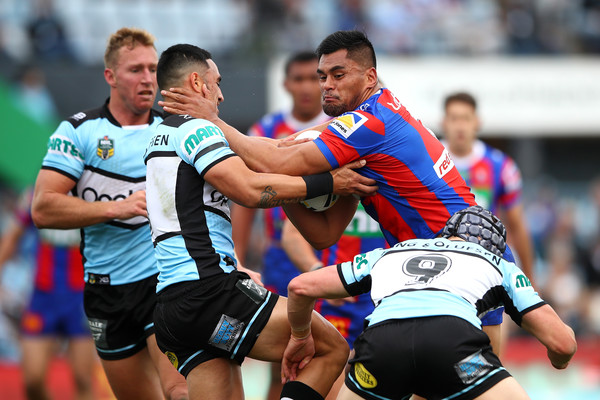 With Barnett placed on report for an accidental crushed tackle on Fifita, Holmes added two more points, putting the Sharks beyond two converted tries ahead. Still, what they really needed was another try, and they got it a couple of minutes later, as Dugan and Lee combined to condense and recapitulate the opening two tries of the game. Positioning himself at the tail end of a crossfield kick from Graham, Dugan smashed the footy back up into the air, and then took a second wing to lob it back to where Lee was waiting, unmarked, to collect it and slam down for another try.

More like a tennis serve than a conventional tap back, Dugan’s linkup with Lee was the moment of consolidation that Cronulla needed, and when Townsend crossed over four minutes out from the end the Sharks had finally reached the level they would have been hoping for a week out from finals footy. Still, this last-minute win looks better on the Panthers than it does on Cronulla, who will be looking for a much more consistent game when they take on the Bulldogs at ANZ next week, while Newcastle will be looking to see out their season in style when they take on the Dragons at home.