No doubt, Friday night’s game was a high stake encounter for the Warriors. They ran onto the field at eighth, but could go as high as fourth if the final round of the regular NRL season went their way. More realistically, perhaps, a win would help them secure a home fixture for the first week of finals footy, while the fact of this being Simon Mannering’s last home game, and possibly his last game, gave the match a special intensity for the New Zealand side.

The supporters seemed to feel it too, since Mt. Smart was sold out and more vocal than at any other point this year, with the rainy conditions and sodden field just seeming to galvanise the Warriors home crowd even more. Yet this was also an important game for the Raiders as well – a last chance for some pride, and a last chance to send some departing players off in style, after one of their most disappointing seasons in recent memory.

In fact, before the Bunnies smashed the Tigers the night before, Canberra looked set to be the first team to score the most points in a NRL season without actually making finals football. They made a terrific effort to show how well they could have done during the opening minutes of this match, completing their first eight sets, and giving the Warriors a bit of a shock in terms of how consistently they defended their line and made inroads on New Zealand territory. 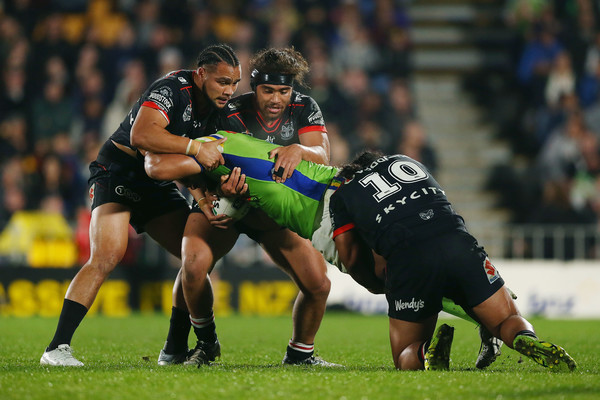 That’s not to say that they didn’t make any mistakes, but they they corrected themselves seamlessly, with a rare error from Nick Cotric, who lost the footy over his head off the back of a Shaun Johnson kick and some pressure from David Fusitua, giving way to a superb intercept from Shannon Boyd that allowed Canberra to regather almost immediately. When a Joey Leilua kick didn’t quite sync up with Jordan Rapana, the Warriors got a seven tackle set, and Mason Lino forced a droput, thanks to some additional work from Roger Tuivasa-Sheck. Once again, though, Canberra got it together and prevented any points being scored.

The consolidation moment for the green machine came about fifteen minutes in. On such a slippery night, it was inevitable that both teams would aim for a 40/20 option, and sure enough Issac Luke kicked on the fourth tackle of a particularly unproductive set for the Warriors, only for the footy to bounce back in towards the middle of the park. Shortly after, Sam Williams tried with more luck, catching RTS out of position as he sliced the Steeden down the left edge for the best kick of the night so far.

The image of Williams’ dexterity, and the contrast with Luke’s botched kick, gave Canberra the extra burst of momentum they needed, so it felt almost inevitable when a flat ball from Josh Hodgson right on the line saw Josh Papalii crash over a couple of tackles later. While he might have been surrounded by Warriors jerseys on all sides, the sheer speed of the pass meant that only Johnson attempted the tackle, for a one-on-one contest that the big Canberra forward was always going to win.

If anything, Papalii used Johnson’s torso to his advantage, bouncing off him, rather than being held up by the tackle in any way, before slamming over the line for a rousing culmination of all Canberra’s early strength and focus. A few minutes later, a misdirected kick from Johnson actually went backwards, forcing Ken Maumalo into touch, and providing the Raiders with yet another opportunity to consolidate their field position.

This time, though, Papalii went from tryscorer to try-enabler, thanks to a small error in the play-the-ball on the last tackle – small enough that it might not even have been pinged in a less significant match. For a small error, though, it had big consequences, since Solomone Kata broke through the line three tackles, skipping over a hit from Jordan Rapan and slamming over Elliott Whitehead right on the line to clock up the first four points for the Warriors.

Full credit has to go to RTS as well, not merely for a perfectly timed pass to Kata, but for a goose step and bounding leap that both momentarily disoriented the Canberra defence and imparted some of its momentum to Kata in turn. In the way it briefly shifted the rhythm of play, it also probably played some part in facililitating the defensive misread that saw Joey Leilua come in to tackle Adam Blair as well, rather than remaining focused on the passage of play between RTS and Kata.

Once again, though, Johnson didn’t quite come through, slotting through what initially seemed like a pinpoint-perfect kick, only for the Steeden to ricochet off the right upright before bouncing back into the field of the play. Still, the New Zealand halfback gets full credit for setting up the astonishing piece of play that resulted in the next New Zealand try, and the single best four-pointer of the night.

At first, Johnson’s short ball to Peta Hiku right on the line looked as if it wouldn’t come for anything, only for Hiku to respond with an utterly uncanny offload – backhanded, one-handed, spiraling, no-look flick pass to Fusitua in the midst of a driving tackle from Blake Austin. So improbable was it that Fusitua himself was completely outmarked out on the right edge, and grounded the ball as easily as if it had been a training run, leaving Cotric with nothing to do but watch as the big Warriors winger lunged over the line.

As the Warriors breathed in and out together afterwards, it felt as if we’d just seen the same total synergy displayed on the field, since Hiku could only have known where Fusitua would be through just this kind of synergy, and sixth sense for where every player is on the field at every time. New Zealand have been the best team for offloads per week in 2018, but this move was a reminder that their supremacy hasn’t just been a matter of quantity, although another botched kick from Johnson held them back, with Williams levelling things with a penalty kick six minutes before the break. 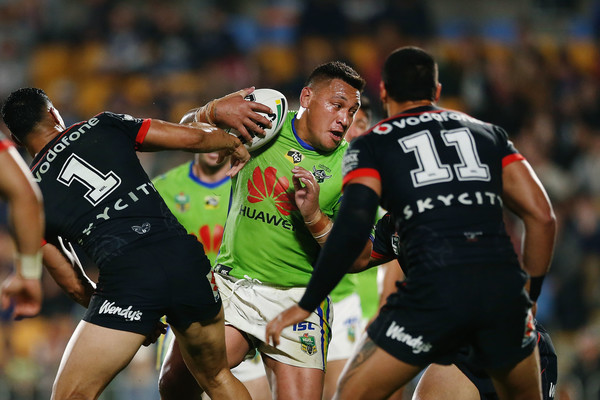 Seeing Mannering taken off with an injury two minutes into the second half was a bit of a low moment for the Warriors, but they paid tribute to their outgoing lock with a try immediately after, thanks to a silky pair of passes from Lino, who burrowed deep into the line, and then Johnson, who was left with enough space to send the footy across to Hiku at just the right time for Peta to slice through the Canberra defence. Whether because the Raiders were expecting Hiku to feed the footy to Fusitua once again, or whether they were taken aback by the speed of the passes, was unclear, but with Oldfield and Cotric in place they had more than enough cover defence to take care of Hiku, or at least force him to shift it across to Fusitua on the edge.

With Johnson slotting through a precise conversion, the Warriors therefore felt as if they’d set their stamp on these opening minutes, especially after a penalty for a Hogdson flop gave Johnson the opportunity to boot through two more points. Shortly after, Johnson was forced to run on the last tackle, setting the stage for a series of brilliantly timed passes and unexpected decisions that nearly got New Zealand the team try of the year, only for the Raiders to clean up the football at the eleventh hour.

In retrospect, Canberra’s ability to shut down this team effort felt like a turning point of sorts, proof that the green machine could manage a resurgent Warriors outfit if they really put some muscle into it. As so often happens, Rapana was the man to spearhead that effort, at the tail end of a last-tackle kick from Hodgson that seemed so destined to scoot into touch that Lino barely bothered to scoop it up as it passed by him, while RTS and Fusitua waited casually for it to bounce over the sideline, confident that none of the Raiders would be able to get a hand to it.

In fact, the body language of the entire New Zealand outfit was pretty relaxed during this sequence, making it all the more dramatic when Rapana jumped from the field of play and curved through the air to pop the footy back into the in goal area, where Kata tried and failed to collect it, before Whitehead got it to ground. At first, Rapana’s play seemed so improbable that it was called no try, only for the Bunker to show that the wiry Canberra winger had in fact managed to remain totally airborne while sending the Steeden back inside, and that he had managed to send it backwards to boot.

It was the kind of freakish try guaranteed to get Canberra back into the game immediately, and with Williams sending through a penalty kick after a hand in the ruck from Tevaga, the Raiders had effectively cancelled out the Warriors dominance of the first half of the stanza, taking the opening 8-8 scoreline to 16-6. They very nearly moved into the lead, too, thanks to a dangerous grubber from Williams, only for Fusitua to ground it first, for a try save that was every bit as important as his try scored, especially given that neither side would score another try.

Instead, two penalty kicks from Johnson got the Warriors a four-point win – the first following an early tackle from Oldfield, the second following a strip from Hodgson. Coming less than five minutes apart, the cumulative impact of these two penalty kicks was pretty visceral, but it must have still been troubling for New Zealand fans that their team was unable to get at least one more try in during the last ten minutes. They’ll be looking for a more resounding victory, then, when they take on the Panthers during the first week of finals footy, while the Raiders have suffered a frustrating loss to cap off a frustrating season, and will be looking ahead to 2019 over the next couple of weeks.