After the Cowboys’ clinical decimation of Parramatta at 1300SMILES last week, it was clear that the Titans had to go hard or go home if they were going to have a chance at coming away from their last match of the season with a win, especially since Cbus Super Stadium felt more like a North Queensland home ground, packed out in blue and gold jerseys farewelling Johnathan Thurston for his final NRL game. The only time Cbus has felt this epic was in Jarryd Hayne’s return from the 49ers, but the atmosphere was far more charged on Saturday afternoon than during that debut.

The Cowboys got the first penalty on the first play, thanks to a slow peel from Jai Arrow, but Gold Coast quickly consolidated, scoring seven minutes in at the back of their strongest set of the night so far. Some good timing and handling from Nathan Peats, Ash Taylor and then Brenko Lee sent AJ Brimson across at the very moment the crowd were rising for their ovation to Thurston at the seventh minute. As the North Queensland crowd roared, the Cows’ defence just seemed to open for the Gold Coast fullback, as all the pro-Thurston momentum went the Titans’ way. 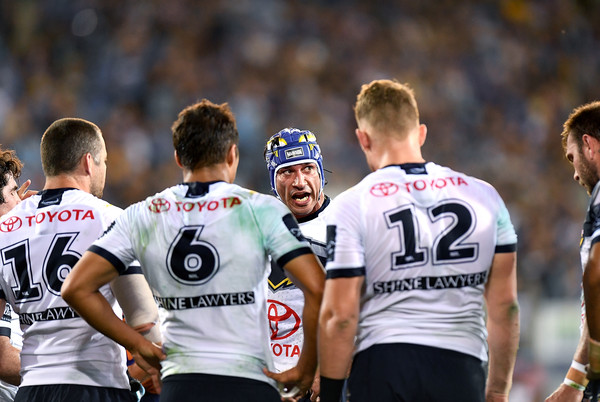 A series of dropouts now followed, the first after Konrad Hurrell was caught in goal. The Cows chose to go short, and the Titans got the ball back, laying the platform for their own repeat set when Hampton was bound up behind the line a couple of plays later. In a stunning one-man effort, Kane Elgey grubbered through the defence on the last tackle, and then followed the footy himself, slicing through Coen Hess and Te Maire Martin as the Cowboys defence started to converge on him.

Elgey’s patience now was even more impressive than his set-up, as he waited for what seemed like an eternity for a good bounce from the ball, leaving it until Kyle Feldt and Hampton were on top of him before reaching out a hand to ground the Steeden. Bookending the Gold Coast season after his last try in Round 1 against the Raiders, it was a perfect farewell before the big half heads to the Sea Eagles, and brought the home team to a twelve-point lead after Taylor added his second conversion. 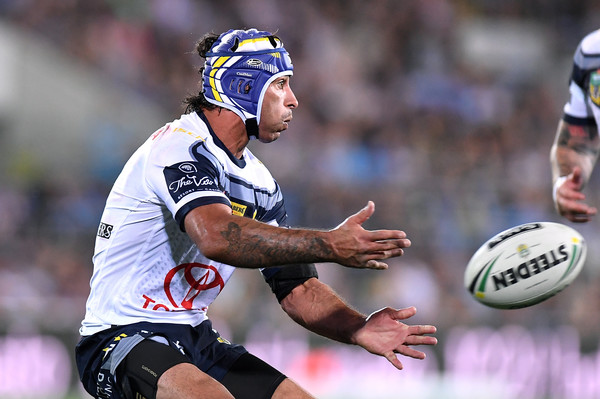 By this point, the Titans had enjoyed 62% of the ball, while North Queensland felt as if they were just trying to prevent any more points being scored against them, rather than glimpsing any genuine tryscoring opportunities of their own. Seventeen minutes out from the siren, a crusher penalty on Moeaki Fotuiaka gave them a much-needed chance, and Thurston made the most of it at the end of the set with a grubber that forced Brimson to clean it up right on the try line.

Once again, Thurston grubbered on the last, but this time Arrow anticipated and cleaned it up perfectly, only for a high shot from Hipgrave on Hampton to return possession to the Cows a couple of tackles later. Yet that just provided the Titans with another opportunity to showcase how well they could contain Thurston’s boot. This time it was a crossfield kick from J.T., followed by a damaging run from Gideon Gela-Mosby, but Anthony Don was better then both of them, cleaning up the North Queensland winger as he caught the footy and then bundling him into touch for good measure.

Shortly after, Brimson cleaned up a Thurston bomb perfectly, paving the way for a huge defensive effort from the Titans eight minutes out from the end. It started with a flick pass from J.T. to the other J.T., who looked for all money as if he was set to crash over, as more and more Titans jerseys slammed in to prevent him from scoring, eventually forcing him to cough up the football as well. 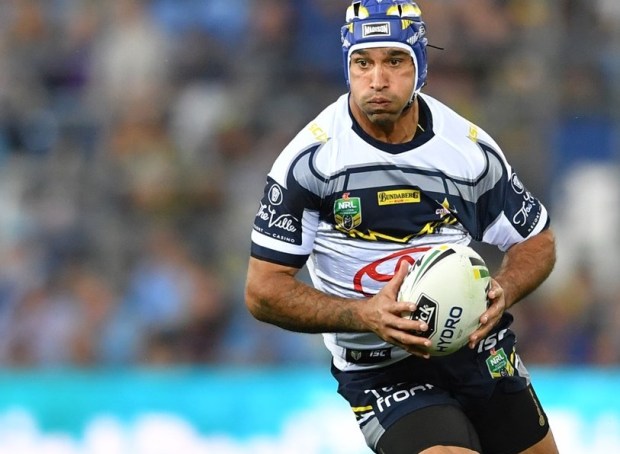 Cometh the hour, cometh the man, as Thurston now put in a defensive effort that encapsulated all the North Queensland frustration at seeing their biggest and strongest player held up by the Gold Coast defence. In the single toughest and best timed move of the game so far, J.T. put in an enormous low tackle on Ryan James, getting in beneath the ribs to bring the stocky forward to ground before he knew what had hit him. 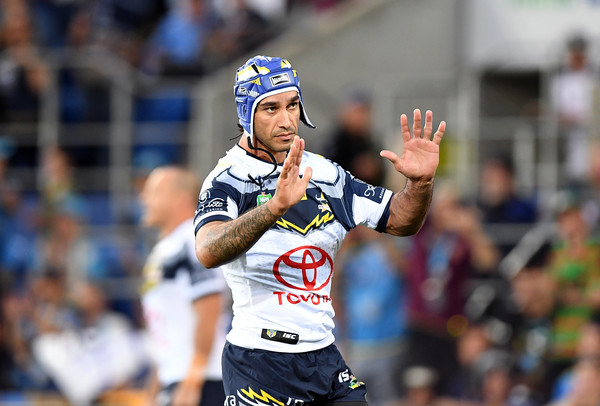 Like Greg Inglis and Latrell Mitchell’s mammoth hit-ups during Origin this year, Thurston’s tackle was a rallying cry for the team and exactly the sign of leadership they needed as the siren loomed, pumping them up with the adrenalin required to lay the platform for their first try of the evening. When it came, it was a similarly gutsty effort, from Shaun Fensom of all people, who simply monstered his way through the Gold Coast line after straightening up the play from Jake Granville.

Finally, the Cows had some momentum, and yet a messy – and uncharacteristic – handling error from Gavin Cooper meant that they barely got a chance at a restart, returning the footy to the Titans almost immediately, who consolidated once again as half time drew near. Three minutes out, Mitch Rein proved that strategy counts as much as strength for close-range efforts, tricking Martin with a massive dummy before crashing over out of dummy half, for a try that felt every bit as decisive as Fensom’s four-pointer. 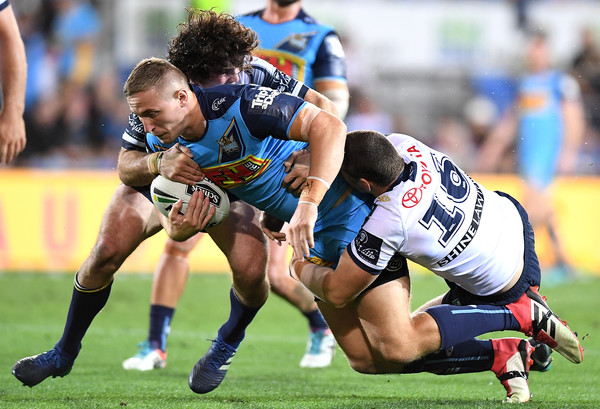 It was imperative, then, that North Queensland score when they come back from the break – and they did, too, thanks to some scrambling under the high ball from Gold Coast that saw Don knock it back onto Cooper, who also knocked it backwards, keeping it alive for Gela-Mosby to scoop it up a metre out from the line. He could have scored then and there, but chose the safer option, sending the Steeden out to Hampton on the left edge to put down the next four points of the night for the visitors.

Once again, though, the Cowboys’ momentum vanished as soon as it had arrived, as an incorrect play-the-ball from Fensom now gave Taylor the opportunity to take the Gold Coast lead beyond a converted try with a kick for goal. It was surreal enough to see Cbus so full, but even more surreal to hear the crowd boo Taylor as he set up the tee, especially in contrast to the rapturous applause that had greeted Thurston as he’d just booted through what might have been the last sideline conversion of his career. 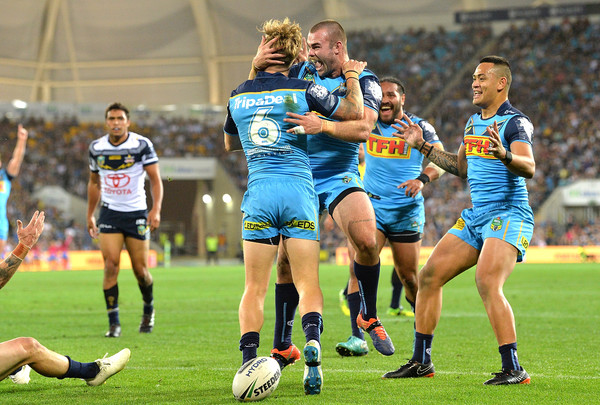 Even if they hadn’t built momentum continuously, however, the Cowboys had built it cumulatively, putting together a performance in a piecemeal but escalating fashion. It didn’t feel so unexpected, then, that they were the next to crash over, thanks to a deft pass from John Asiata, and a poor defensive read from Brenko Lee, that saw Hampton score in the left corner, bringing North Queensland to a two-point deficit as Thurston sent the Steeden sailing through the posts. 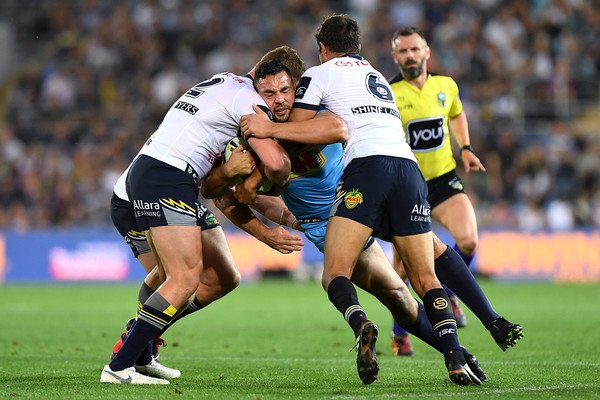 For the first time in the match, the Cowboys had scored two successive tries – and a double from Hampton at that – making it feel as if they were finally contenders. With Matt Scott coming onto the field, they started to really dig deep, putting in a series of massive plays. First it was Scott and McLean driving Hipgrave back into the in-goal area, then it was a huge tackle from Thurston on Taylor that forced him to cough up the footy, in a great sequel to his earlier tackle on James.

Shortly after, Taylor went for a 40/20 only for some pressure from Granville to allow Scott to charge it down, while a grubber from Thurston got the Cows their seventh goal line dropout, and yet another dropout option from Taylor, who’d experimented with both short and long kicks over the course of the night. Finally, it all crystallised with a crossfield kick from Thurston to Cooper to send over the big second-rower, while a big run from Gela-Mosby shortly after clocked up a fourth straight try for the visitors.

A fantastic final effort from Brenko Lee narrowed the scoreline to 26-30, but the Cowboys had still sent out Thurston with a bang, ending a disappointing season with a pair of knockout matches that already had a bit of a flavour of finals footy about them. Meanwhile, this was a pretty good match for the Titans as well, and a really respectable way to send out their season, as well as a rallying-point for when they regather in 2019 for the pre-season and get started once again.