They might have had a bumpy start, but the Dragons would come away from their qualifying final against the Broncos more galvanised than at any point this year, achieving a staggering thirty point victory over the home team that seemed to promise their return to the outstanding form they’d showcased at the start of the 2018 season. They opened with their best line speed in weeks, with Jordan Pereira almost crossing over immediately, only for some quick thinking from Jamayne Isaako to bump the St. George winger into defence at the last minute.

Ben Hunt tried to respond to Milford on the next set and execute a dropout in turn, only to strike the Steeden too hard on the fourth tackle, giving Brisbane another bout of field position. A terrific run from James Roberts up the left side of the field saw the Broncos almost put down the first try of the game, and they took the lead for the first time when a hand in the ruck from Cameron McInnes saw Isaako kick through another penalty goal. 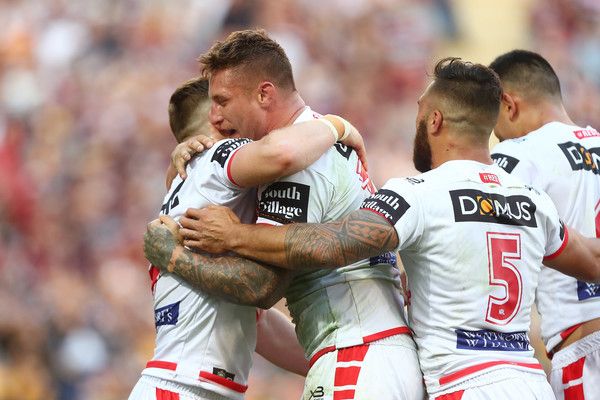 On the next set, Kodi Nikorima broke through the line on the right edge, dummying and dancing around Jack De Belin before looking back to his inside about fifteen metres out from the line, moments before Dufty came in for a tackle. Luckily, Fifita had read the play perfectly, skipping over De Belin on the ground and storming up through the middle of the field to collect the footy from his halfback and slam over the line for the first try of the afternoon, in his first ever round of finals football.

The Dragons started their own comeback on the next set, where Sims made up for his try-enabling penalty by bookending the first four-point sequence for the Red V. Two tackles into the Broncos’ set, a huge hitup from Sims saw Andrew McCullough lose the footy, and it must have been cathartic for the St. George second rower to hear it called a loose carry, rather than a strip. From there, Zac Lomax muscled his way to the line on the second tackle, before James Graham and Hunt shifted the ball across to Sims, in what was quickly shaping up to be a spectacular set play.

Sims put the icing on the cake by collecting the football, and putting in an original take on the twist and spin, not revolving through the defence so much as around the defence, with the result that Nikorima barely got a hand to him by the time hit hit the turf. At the backend of a set that had been established by Sims’ barnstorming strength and determination in defence, this was a move that exuded elegance and an almost balletic grace in the way in which it dismantled the Brisbane line.

Yet with Tyson Frizell coughing up the footy within the Dragons’ twenty on the restart, and Graham taken off reluctantly for an HIA, the surge of St. George momentum was in danger of dissipating. The Red V’s big men needed to step up, and they did so spectacularly a couple of minutes later, at the tail end of a set that started with Frizell making up for his earlier gaffe by launching himself at the Brisbane ruck and very nearly breaking through.

A couple of tackles later, a dummy from De Belin and a quick play-the-ball from McInnes saw Leeson Ah Mau put in arguably the toughest try of the night, literally burrowing himself into the Brisbane defence and coming to ground with a desperate Darius Boyd on his back, followed by a host of other Broncos jerseys. They were too late, however, and with Widdop adding the extras the Dragons were now four points ahead, begging the question of how the Brisbane forwards would respond to this show of adrenaline. 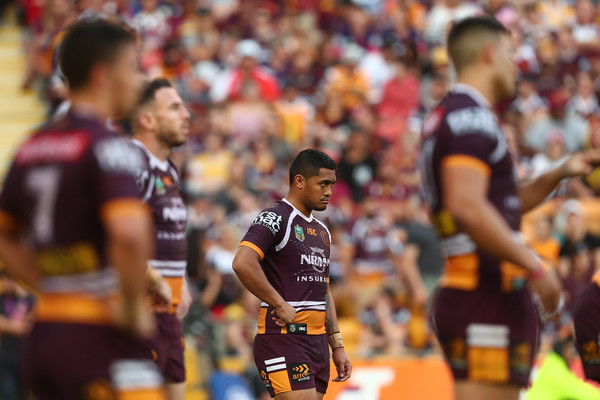 As it turned out, the first reaction was panic and frustration, as Korbin Sims responded with a strip that gave the Dragons a renewed bout of field position moments later. While the Broncos might have survived the next set, Sims compounded his error by lifting Blake Lawrie above the horizontal early in the Dragons’ next assault – a mistake that not only gave the Red V another surge of field position, but exposed a desperation on the part of the Broncos that you rarely see at Suncorp.

A tackle later, Jeremy Latimore poked his nose through the line. From there, Dufty sent a harbor bridge pass across to Macdonald, only for Nene to send it back inside again, as the Dragons tested the Broncos’ ruck for any possible gap they could find. The away crowd went wild when it was Sims who found it, as the big second-rower built off some brilliant timing from Hunt in dummy half to slip around Roberts and slam down four more points on the left edge, before getting up and regaling the crowd with the most triumphant body language of the game so far.

All of a sudden, the disparity between the two teams was condensed to the disparity between the Sims brothers – a disparity that was made even more dramatic by the fact that Tariq had actually started the game with an error, as well as the fact that if Korbin lost the game his next match would be in St. George colours. So intense was the Dragons’ momentum that it felt as if one more try, this half, would be enough to completely ensure them the game, especially since they had already broken their record for first half points scored at Suncorp. 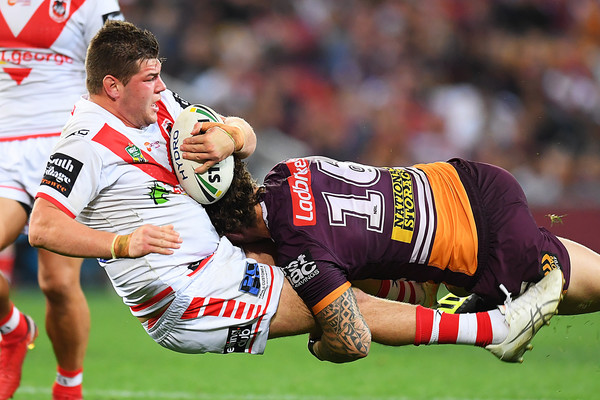 Yet the next try condensed that momentum even more spectacularly than anyone could have imagined, as a quick pass from McInnes right on the line saw Tariq not only score the first double of his career, but actually slam through brother Korbin in the best single one-on-one contest of the round, leaving no doubt about who was the best Sims on the park that afternoon. Around the same time, it became known that Graham wouldn’t return to the field, but the Dragons were so dominant that it barely seemed to matter, since they had distilled all the promise and potential of the first half of their 2018 season into a scintillating display of football vision and determination.

An error from Korbin right on half time – this time for being square at marker – saw Widdop shoot through a penalty kick after the siren had sounded, stamping his team’s signature on the first half to bring the scoreline to 10-28. The Red V got right back amongst it after the break, with Lomax forcing half the Broncos defence to hold him up over the line four tackles into their first set, and Brisbane turning in their worst attack of the afternoon seven minutes in, culminating with Boyd being cleaned up on the last tackle within his own forty. 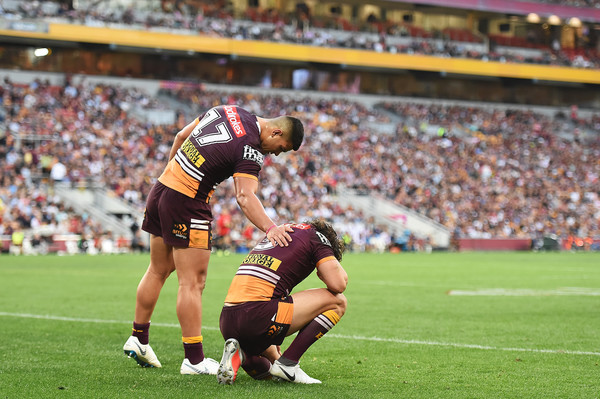 From there, the Dragons consolidated further, with Hunt putting in one of his more creative options of the night by kicking the footy backwards on the second tackle, laying the foundation for Widdop to orchestrate a dropout on the other side of the field by chasing down his own grubber and sending Isaako into touch. The Broncos opted for a short dropout, and for a moment Jordan Kahu seemed to have cleaned it up pretty effectively on the right edge, only for Lomax, who apparently had been especially vocal in the halftime huddle, sending the big Brisbane backliner into touch. 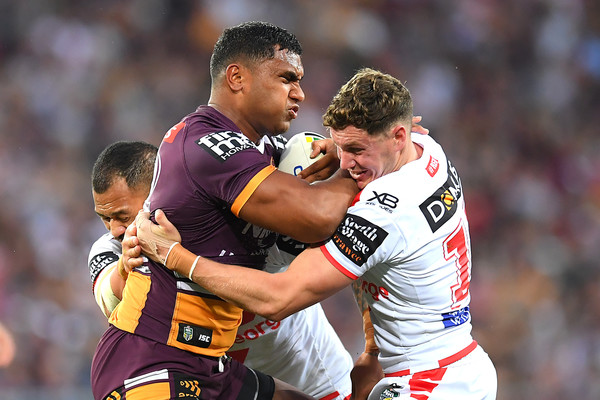 St. George now reached their very apex with a set play out of the scrum that saw Hunt shift the Steeden across to Dufty, who moved fast enough to force Roberts to commit to the tackle, leaving space on the left edge for Tim Lafai to slam to ground right in front of the Dragons away crowd. To his credit, Roberts had managed to recalibrate pretty quickly, but a big right hand fend from Lafai contained him long enough to ensure the Red V four more points before Jimmy the Jet slammed down on top of him.

A heartbreaking period now followed for the Dragons, however, as they lost two of their most critical players to injury, giving the Broncos a bit of an edge, but, perhaps more importantly, calling into question whether they would be able to maintain this sterling performance for the next week of finals footy. First, it was De Belin taken off with the foot issue that has plagued him recently, a fairly serious absence given that Graham had also failed his HIA test immediately before half time.

The Broncos made the most of the shift in momentum, with Boyd responding to Lafai’s stunning run on the very next set. Collecting the Steeden from Nikorima ten metres out from the line, the Brisbane fullback busted through Widdop and Dufty to smash over the chalk, only for Isaako to hook the conversion away to the left. A few minutes later, Nikorima repeated Boyd’s tackle-busting dexterity right on the line, finding himself in much the same position that had allowed him to assist his no. 1, but having a shot at four points of his own.

The gamble paid off, as Nikorima dummied right, and then actually ran right. For a moment he seemed to have been cleaned up by Pereira and Sims in the corner, only to somehow bust through the tackle without committing a double movement, and slam down a resounding Brisbane try to the joy of the home crowd. So unlikely was it that Nikorima would emerge unscathed from these two tacklers that for a moment it felt as if the Broncos had a real chance at the comeback, especially since Widdop was now taken from the field, in the darkest moment of the match for the St. George faithful. 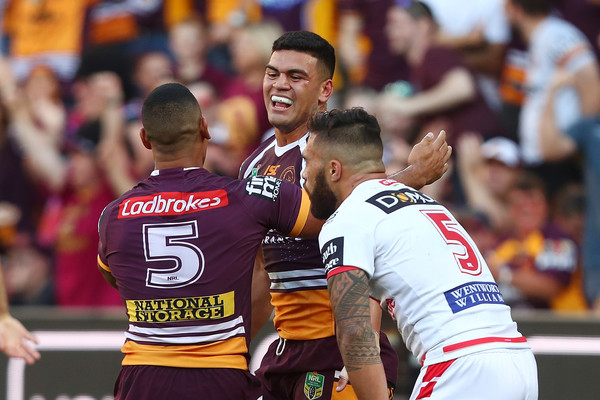 As it turned out, however, the Dragons were far from done. Five minutes aftert providing a much-ndeed burst of energy, Luciano Leilua took the first tackle following a dropped ball from Nikorima got the Red V another set at the sixty-seventh minute. A couple of tackles later, Leilua scored a try off the back of a McInnes grubber, as the visiting team self-corrected and started to exude the same sense of effortless momentum that they’d showcased earlier in the match.

A try from Dufty in the last minute sealed the deal, gaining the Dragons a thirty point victory and their most decisive win of the back half of the 2018 season, if not the whole season. If Lomax had seemed to develop a new maturity as a leader over the course of this particular match, then he stepped up even more concretely in Widdop’s absence, adding the extras for both Leilua and Dufty’s tries, while booting through a penalty shot of his own for good measure following a grapple from Kotoni Staggs.

Add in a 40/20 kick from Hunt at the seventy-third minute, and this was arguably the best game of the year for St. George. No matter their results in the next stages of finals footy, then, this will be a critical rallying point when it comes to their 2019 season, as well as setting the stage for an exciting match the next time that these two teams face each other at Suncorp Stadium.