Like the Warriors before them, the Cowboys coped just fine without their former halfback on Saturday evening, although the new combinations in the team meant that it took them a while to get going. On the other side of the Steeden, this was a second disappointing match for the Dragons following their loss in the Charity Shield, especially since they started with a few promising sets, including the first dropout of the night on the back of a long-range kick from Gareth Widdop.

The repeat set just turned out to be a showcase for how well the Cowboys could defend on both sides of the field, however, as they cleaned up a harbor bridge from Corey Norman to Nene Macdonald on the left edge, before Justin O’Neill made a terrific trysaving tackle on Mikaele Ravalawa after he collected the footy from Euan Aitken on the right. Michael Morgan followed up with a 40/20 – the perfect way to affirm his vision from the halves post-Thurston – and the Cowboys got further field position when Cameron McInnes was pinged for not being square at marker. 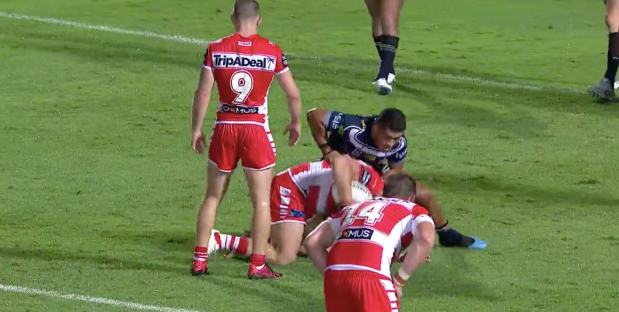 Yet this would be the first of many lost opportunities for North Queensland in this opening stanza, most of them resulting from the new combinations within the side. This time, Josh McGuire wasn’t ready for a Jake Granville pass, and handed the ball back over to St. George, although it didn’t make much of a dent in the Cowboys’ momentum, since some big pressure from Coen Hess led to Norman booting the football over the sideline on the full at the end of the set.

The Cows now made an almost identical error on the first tackle – this time from Jordan Kahu – as the Dragons responded with two big runs to score their opening try of the 2019 season. The first came from Norman, who scooped up the footy after Kahu lost it and ran half the length of the field; the second came from Aitken, who continued to take advantage of the broken play to scoot down the right side of the field. With Granville missing the tackle, the Dragons had their first try, as Widdop curled through one of the gnarliest conversions of the entire game.

This didn’t shake the Cowboys’ composure, however, with Javid Bowen waiting calmly for Norman’s next kick to cross the dead ball line, despite Widdop raring up from behind. With Widdop fumbling the high ball under some good contact from O’Neill, North Queensland got their third chance in the red zone, and Te Maire Martin sent a good ball off the side of the boot, only for some late pressure, and a bit of disorganization in the attack, to allow Widdop to clean it up without much effort.

Over the next couple of sets, the Dragons started to decelerate. Fifteen minutes out from the end, Tariq Sims was forced to kick on the last tackle, but the ball only went half a metre before ricocheting off the North Queensland defence. At the same time, the Cows were still struggling to score, and seemed unable to make the most of their general advantages in field position or possession, let alone the specific opportunities that they got over this doldrums period.

Still, the luck seemed to be on the home team’s side, as when a pressured Morgan kick was twisted backwards in the air, only to lead to a knock-on from Ben Hunt. The Cows now had another chance right on their line, but responded with another botched pass, this time from Granville to Asiata. While O’Neill might have helped Ravalawa lose the footy on the first tackle of the next set, the Cows still couldn’t execute, since while Tom Opacic might have almost made his way to the line with a tackle to go, another chance went begging as Hess was pinged for an obstruction.

Half an hour in, the rain really started to pour down, making ball handling even trickier, and making it even more important for the Cowboys to put down at least one try before the half time siren rang out. With so much uncertainty around their new players, and so many missed opportunities, they needed a couple of big one-man efforts to break open the game – gestures of leadership that could stand in for the rousing role that Thurston would typically play during these lag moments in years gone by

The first of these came from the other J.T., who broke through the line eight minutes out from the end, off a short ball from Asiata, only to be brought to ground by an amazingly courageous low tackle from Widdop. Once Taumalolo got going, however, his momentum infused the whole team, so it was no surprise when a series of deft passes sent Javid Bowen across on the left edge on the next tackle. Widdop’s defence was just as brilliant here and, in combination with the slippery Steeden, almost got the job done, only for the replay to reverse the call of no try and show that the punchy winger had indeed made momentary contact with the turf. 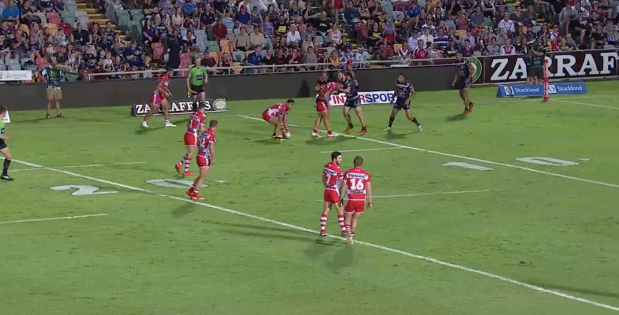 Less than two minutes out from the siren, the Cowboys made their second big show of strength – and from the best man on the park to get under St. George’s skin. Following a pair of dummies from Martin and a bad defensive read from Tim Lafai, Macdonald found himself with the football fifteen metres out from the line. Sending Norman, Sims and Frizell, one of the Dragons’ most prolific former tryscorers now scored his first try against the Dragons.

The conclusion to the first half couldn’t have been scripted better, and if it had occurred ten minutes earlier it might well have led to a torrent of North Queensland points. Yet the game settled back into the doldrums for the first ten minutes of the second stanza, which ended with a brief pause as Frizell went to ground clutching his groin, for what would turn out to be a ruptured testicle. He got back up to play again, however, but the Dragons still couldn’t consolidate, with a promising kick bomb from Ben Hunt two minutes in leading to an awkward error from Ravalawa.

A minute later, Taumalolo returned to the park, reinvigorating the Cows with a fresh injection of adrenalin. After Widdop only just brought the ball back into the field of play on two successive sets, Taumalolo, Scott and Cooper dragged Ravalawa in goal on the first tackle. On the repeat, Asiata fumbled the footy, dummied it, and then seemed as if he genuinely intended to shift it over to Scott, only to take the tackle and offload to Morgan.

If Morgan’s earlier 40/20 had cemented his vision from the halves, then the next passage of play felt like him coming into his own as the skipper in Thuston’s absence, as he ran straight at Widdop before getting low about five metres out from contact to avoid being held up as he got the ball to ground. It took the St. George fullback by surprise, who couldn’t quite contain his adversary, and tumbled away to the side as Morgan put down four more points for North Queensland.

With Kahu off the field, Martin now missed his first goal attempt in the NRL, but he made up for it with a good take under the high ball a couple of minutes later. Still, the Dragons could clearly sense the ex-Panther’s discomfort in the fullback role, and sure enough Sims slammed him to ground at the end of the next St. George set. At first, this seemed like a statement of purpose, but Martin got the last laugh, scoring shortly after on the back of a brilliant offload from Maclean, who came to ground twenty metres out, but managed to keep his arm up and send the footy across to Taumalolo, who stormed through the line before passing to his no. 6 in turn.

Like several other games in Round 1, this slow-scoring affair accelerated in the final five minutes, with both teams putting down a try apiece. The first came from the Cowboys, and started with some good communication between Maguire and Morgan that allowed the North Queensland halfback to send through a pitch-perfect grubber that bounced at just the right moment to land on the chest of O’Neill, who ran into it rather than even having to collect it, to score the last try for the home team. 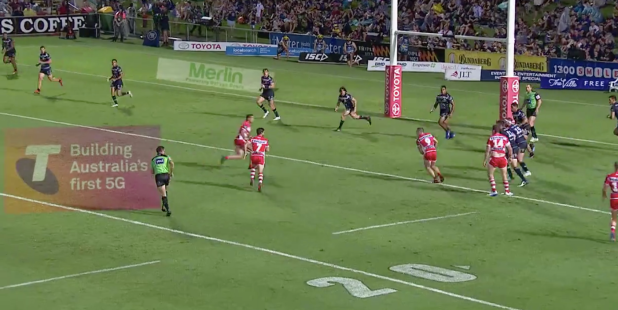 The next was a consolation effort for the Dragons, two minutes out from the end, and started in a pretty unlikely way – with a pass from Hunt that bounced straight between Widdop’s legs. Luckily for the Red V, there was no knock-on, and a couple of tackles later Jordan Pereira crossed over after a touch from Macdonald got the Dragons six again. If they’d won the game, it would have made for great symmetry with their ex-winger’s try at the end of the first stanza, but as it was this was a reminder of how much Macdonald could have done if he was still on their side.

It was a bit of a drab ending, then, for the Dragons, especially given their off-season dramas, and the ongoing absence of Jack De Belin from their forward pack. They really needed a big win to put some of that behind them, which is what they’ll be looking for when they take on the Bunnies at Jubilee Stadium next week. On the other hand, the Cows feel like they’ve put their horror 2018 season behind them from game one, and will be keen to prove that this result was no fluke when they meet Brisbane on Friday night for the first Queensland derby of the year.