It was a rainy affair for the first western derby of 2019, and the 97th since this particular rivalry’s inception. Both teams started strong, with the Panthers showing their home ground edge with a great early kick chase from Nathan Cleary that cleaned up Blake Ferguson before he could make any metres after one of his first efforts under the high ball. Still, Fergo made up for it with a great take under a Cleary kick two sets later, as the Eels started to assert their dominance, opting for an offload-heavy opening that seemed to take the Panthers by surprise.

While the football was pretty slippery, it was still a shock when Dean Whare dropped it seven minutes in, thirty metres out from the Penrith line. With Moses collecting it, the Eels got their best attacking opportunity of the afternoon so far. It took three defenders and the padding to hold up Nathan Brown on the third tackle, while only a low effort from Cleary prevented Marata Niukore getting through on the next tackle. With a flop from Hame Sele, the count restarted, as Fergo had a shot on the right wing, before the Eels centred and straightened their play once again.

They wouldn’t score this time, however, since a lost ball from Daniel Alvaro got the mountain men a letoff. Despite the fact that Maika Sivo was on debut, the Panthers had seemed to be testing Ferguson’s confidence in Parramatta colours, kicking towards him on the last tackle whenever they had a chance. Twelve minutes in, this strategy paid dividends, tempting an escorts penalty from Brad Takairangi. It was now Penrith’s turn to have a fresh set twenty metres out from the opposition line, and with James Maloney kicking on the second tackle they got the first dropout too.

It was doubly disappointing, then, when Dallin Watene Zelezniak fumbled the football at the tail end of Clint Gutheron’s kick, thanks to a dangerous low bounce that was exacerbated by the slippery grass. Twice the Panthers had been defied by the wet conditions, so the momentum was clearly with the Eels now, as Fergo proved his worth in the most spectacular way, leaping up in the right corner to pop a Mitch Moses kick back into the field of play with his right hand.

This time, the linkup with Takairangi was more productive, as the big no. 4 curved around Josh Mansour and banana kicked the football off his right boot. Skittling back in field, the Steeden covered an alarming amount of space – at least for the Penrith defence – sailing past Ferguson before Niukore leapt on it, tucked it into his chest, and executed the gutsiest single putdown of Round 1. Ignoring Mansour around his legs, and muscling through Cleary and Edwards, who were converging from in front, Niukore simply held tight to the footy, trusted his strength, and burrowed it into the chalk.

While Moses didn’t add the extras, this was still a resounding opening from the Eels, who were clearly determined to leave last year behind them from the moment they ran out onto the park. With Hame Sele and Nathan Brown both off with injuries, there was a brief pause in the game, making it even more powerful when Gutherson bookended the next Parramatta set with two flamboyant options. The first was a harbor bridge pass on the opening tackle, the second a chip and chase that Mansour could only clean up by sliding in goal, where he was trapped for a Parra dropout. 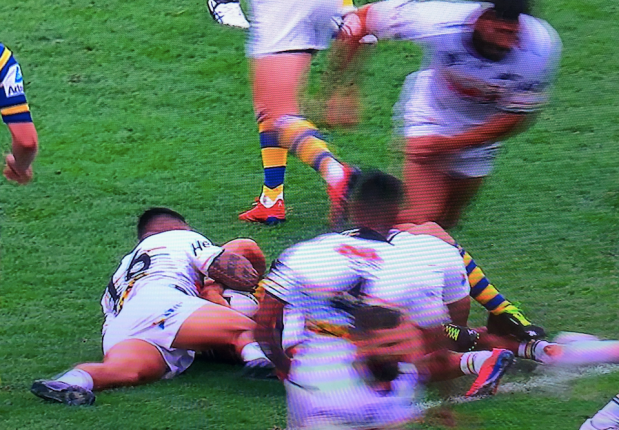 The Eels made as little of this next set as the Panthers had made of their dropout, with Tim Mannah offloading to Moses Leota a couple of tackles in. Yet with Mansour fumbling the football a couple of tackles later, the Eels were back where they had started. Fergo now stepped into the spotlight, fending off Mansour and eluding Cleary to execute what looked like a trademark putdown on the Eels’ right edge. In slow motion, however, it emerged that Mansour’s tackle had done the job, forcing his opposing winger to put his right foot on the chalk before getting the footy down. 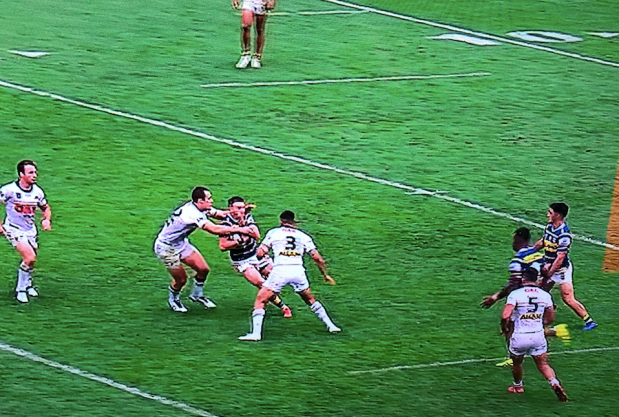 The Eels got their revenge moments later, when Mansour lost the ball under some enormous pressure from Reed Mahoney and Tepai Moeroa. Interestingly, the replay showed that Sauce lost the football before the two big men converged upon him, in what was effectively the third handling error that the Panthers had suffered during these rainy conditions, even if Mansour had clearly been spooked by these two massive units heading in his direction, as they had intended him to be. 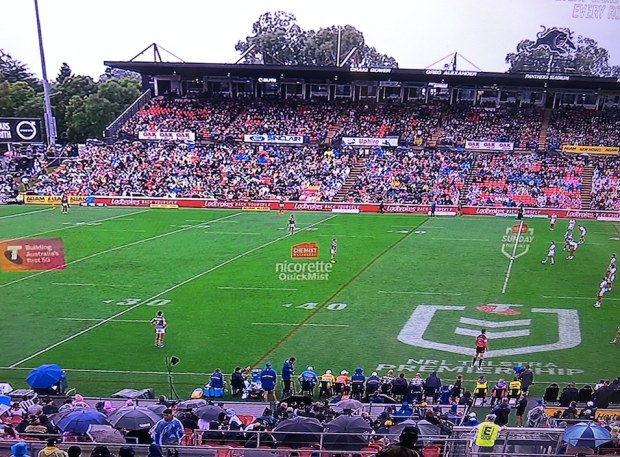 The Eels now started to drift over to the right of the field, as if to recapitulate Fergo’s momentum, but shifted back to the left again after seeing there was nothing doing on his wing this time around. A tackle later, an offload from Dylan Brown and pass from Shaun Lane sent Michael Jennings across, although Jenko had to do considerably more than just collect the footy and score.

In the most gymnastic display of the afternoon, Jenko juggled the ball in his left hand, before it actually ricocheted directly behind his head, only for him to twist his torso around and regather it on his chest as he landed, back-first, on the turf. In the process, he had the Penrith defence to contend with as well, but the call was that he had managed to regain possession cleanly, despite the replay suggesting that the Steeden had come off Edwards during the battle

This was to be the first of several grievances for the Panthers over the rest of the game, culminating with Jenko being sent to the sin bin fifteen minutes into the second stanza. Before that happened, however, the Eels scored again shortly after returning from the sheds, after Mansour was pinged for not being square at marker. Moments later, Mansour knocked on a pass from Takairangi, getting Parramatta six again as the Panthers starts to flag.

All they needed was one tackle, however, with Moses receiving the footy from Takairangi and then offloading with the left hand back inside to Reed Mahoney for his first try in the NRL. This was the start of a golden period for Moses, who booted through the first conversion of the afternoon moments later. After another dropout for Penrith, Moses held up Blake with the trysaving tackle of the match, storming over from the middle of the field to get beneath the burly backliner, forcing him to cough up the Steeden so late in the piece that every Penrith player in the vicinity assumed he had scored.

Towards the end of last year, a fourteen point deficit would almost have been an advantage for the Panthers, given their proclivity for second half comebacks. Fresh into a new season, however, zero points was starting to hurt, and tensions flared shortly after in the middle of the field. To make things even more volatile, some high contact from Jennings on Isaah Yeo caused him to lose the football, leaving it open from Sivo to scoot in and scoop it up for what initially appeared to be his first try, let alone his first intercept try, in the NRL. 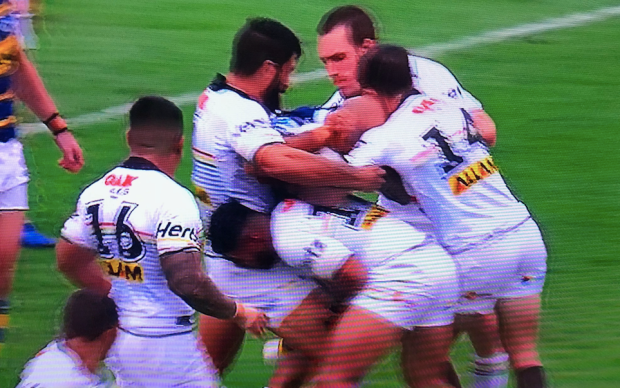 Yet with the try called back, and Jenko sent from the field, the momentum quickly shifted, as Wayde Egan instead became the young gun to put down points, thanks to precisely the one-man effort that Penrith needed to get their game back on track. Running into the line, and reading the ruck perfectly, Egan dummied a couple of times, as Mannah hovered to his right, waiting to see if he moved or passed inside, and Moses stormed in, realising that this was every bit as critical as Blake’s effort.

In the end, Egan defied them both, and came to ground with them both on his back, as a Cleary kick reduced the deficit to eight points, and the home team set about to reclaim Panthers Stadium with only twelve men in Parramatta colours. For a while, it looked as if they might not score again with this advantage, but fifteen minutes out from the end, and less than a minute before Jenko returned, James Tamou crashed over on the left side of the posts on the second tackle of a repeat set.

This whole sequence exuded momentum and rhythm, from the rapid play-the-ball, from Cleary, to Tamou’s barnstorming run, which allowed him to collect the footy at speed ten metres out, and then coast through Smith, Alvaro and the Parramatta pack defence that coalesced around them. As with Egan’s try, this was just the one-man effort that the Panthers needed – someone to step up and lead – and for the first time they felt as if they were really rolling, with Cleary’s conversion narrowing the scoreline to 12-14. 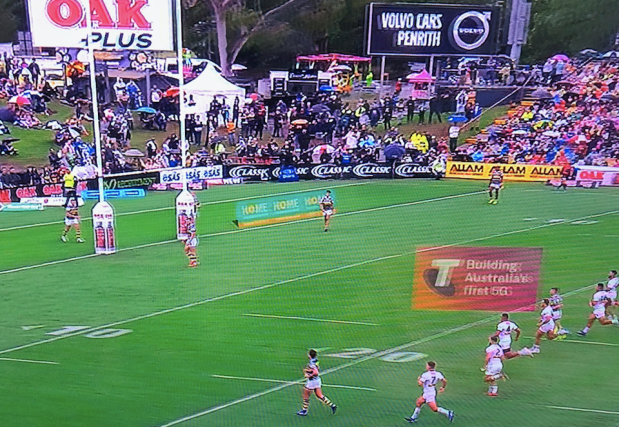 Once again, the game paused after Jarome Luai’s leg was hyperextended during an encounter with Gutherson, and once again the pause favoured the Eels, who now ground on for their most sustained attacking sequence of the entire game. As one repeat set succeeded another, the Panthers were forced to dig deep to defend their line, starting with a Dylan Brown kick, and a Michael Jennings chase, that forced DWZ over the sideline a few metres out from the try line.

At the end of the next set, Moses sent through a grubber, and Cleary knocked it on while trying to scoop it up. It wasn’t a great kick from Mitch, and a pretty good bounce for Nathan, but for the fourth time the slipperiness of the Steeden proved too much for the Panthers. Luckily for the home crowd, Alvaro lost the footy on the second tackle on one of the later repeat sets under some big pressure from Tamou, in what felt like a turning-point for Penrith, who got the scrum feed ten metres out. 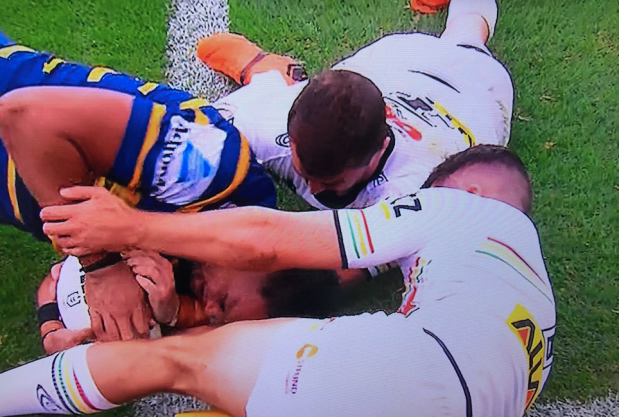 Four minutes out from the end, the Eels seemed to have sealed the deal after Tepai Moeroa chased down a Moses kick, waiting for it to bounce right in front of the tryline before lunging forward, gathering it against its chest, and grounding it all in one motion. As fate would have it, however, he bobbled it just before reaching the turf, and while a high tackle on Moses during the kick might have got the Eels a penalty, they decided to tap and go instead of taking the two.

It paid off, as Jenko crossed over three tackles into the next set, on the back of some deft movement out to the right edge of the Parramatta attack, once again thanks to some brilliant timing from Dylan Brown. The late Penrith surge ended up making the blue and gold win even more rousing – a brilliant start to their season, especially once Moses’ conversion put them beyond a converted try lead – while the mountain men will be looking to start scoring earlier, and to score more rapidly, when they take on the Knights in Newcastle next Saturday night.